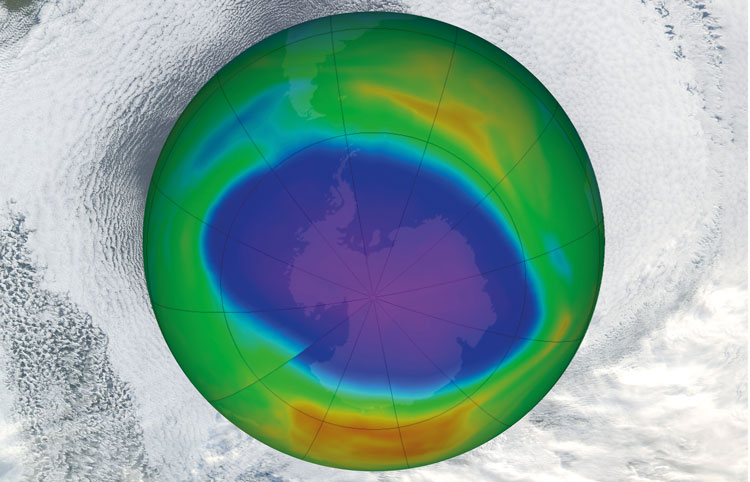 As Government leaders head for Glasgow for the opening of the COP26 summit, the hole in the world’s ozone layer over the Antarctic is the size of North America according to data from NASA.

A colder than usual Southern Hemisphere winter led to a deep and larger-than-average ozone hole that will likely persist into November or early December, said scientists from NASA and NOAA making it the 13th largest ozone hole since 1979.

“This is a large ozone hole because of the colder than average 2021 stratospheric conditions, and without a Montreal Protocol, it would have been much larger,” said Paul Newman, chief scientist for Earth sciences at NASA’s Goddard Space Flight Centre in Greenbelt, Maryland.

The team said the ozone hole is recovering due to the Montreal Protocol and subsequent amendments banning the release of harmful ozone-depleting chemicals called chlorofluorocarbons, or CFCs. If atmospheric chlorine levels from CFCs were as high today as they were in the early 2000s, this year’s ozone hole would have been larger by about 1.5 million square miles (about four million square kilometres) under the same weather conditions.

What we call the “ozone hole” is a thinning of the ozone layer in the stratosphere (an upper layer of Earth’s atmosphere) above Antarctica that begins every September. Chemically active forms of chlorine and bromine derived from human-produced compounds are released during reactions on high-altitude polar clouds. The reactive chlorine and bromine then initiate ozone-destroying reactions as the sun rises in the Antarctic at the end of winter.

NASA and NOAA researchers detect and measure the growth and break up of the ozone hole with satellite instruments aboard Aura, Suomi-NPP and NOAA-20.

This year, NASA satellite observations determined the ozone hole reached a maximum of 9.6 million square miles (24.8 million square kilometres) – roughly the size of North America – before beginning to shrink in mid-October. Colder than average temperatures and strong winds in the stratosphere circling Antarctica contributed to its size.

NOAA scientists at the South Pole Station, one of a world-wide ozone monitoring network, record the ozone layer’s thickness by releasing weather balloons carrying ozone-measuring instruments called ozonesondes that measure the varying ozone concentrations as the balloon rises into the stratosphere.

“While the 2021 Antarctic ozone hole is larger than average, it’s substantially smaller than ozone holes in the late 1990s and early 2000s,” said NASA.

This year, NASA satellite observations determined the ozone hole reached a maximum of 9.6 million square miles (24.8 million square kilometres) – roughly the size of North America – before beginning to shrink in mid-October. Colder than average temperatures and strong winds in the stratosphere circling Antarctica contributed to its size.

Commercial space station gets lift off
Scroll to top