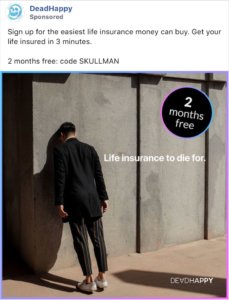 UK regulator the Advertising Standards Authority has rapped a life insurance provider over an on-line advert it was claimed trivialised suicide.

Derby-based Dead Happy was the subject of a complaint that a paid-for Facebook post for Dead Happy in September this year was “alluding to depression and male youth suicide”. The complainant challenged whether the ad was irresponsible and offensive.

The profile picture was a laughing skull. The ad stated “Sign up for the easiest life insurance money can buy. Get your life insured in 3 minutes. 2 months free: code SKULLMAN” and was accompanied by an image of a man leaning the front of his head against a wall with his arms by his side with text which stated “… Life insurance to die for”.

Dead Happy Ltd said they were aware that dealing with death was not easy and that they took mental health very seriously. They said the ad was part of a larger campaign where they were focusing on the bizarre and absurd ‒ for example, one of the ads showed a man wearing a panda head and another showed a man planking against a wall. They said they chose those images based on their ability to stop someone scrolling past them.

In its assessment the ASA said it understood that the ad was part of a larger campaign which used images designed to attract attention and that the image was not chosen to highlight any connection to suicide.

“However, while the ad did not refer to depression or suicide, we were concerned about the image,” it added. “The young man was alone, leaning forward with his head against the wall and his back to the audience. We considered those elements, together with the shadowing in the image, created the impression that he felt isolated and was in despair. In the context of an ad for life insurance – which we understood covered suicide ‒ we considered those who saw the ad were likely to associate the man’s posture as alluding to suicidal feelings.”

The ad also featured an image of a laughing skull, a two-months’ free promotional discount code “SKULLMAN” and the strapline “life insurance to die for”, which appeared prominently alongside the man. “We considered those elements, taken together and in combination with the image, trivialised the issue of suicide,” explained the ASA. “We considered that by trivialising the issue of suicide and alluding to it to promote life insurance, the ad was likely to cause serious offence to some people, including those who had been personally affected by suicide, and was irresponsible.”

The ASA ruled the ad must not appear again in its current form.