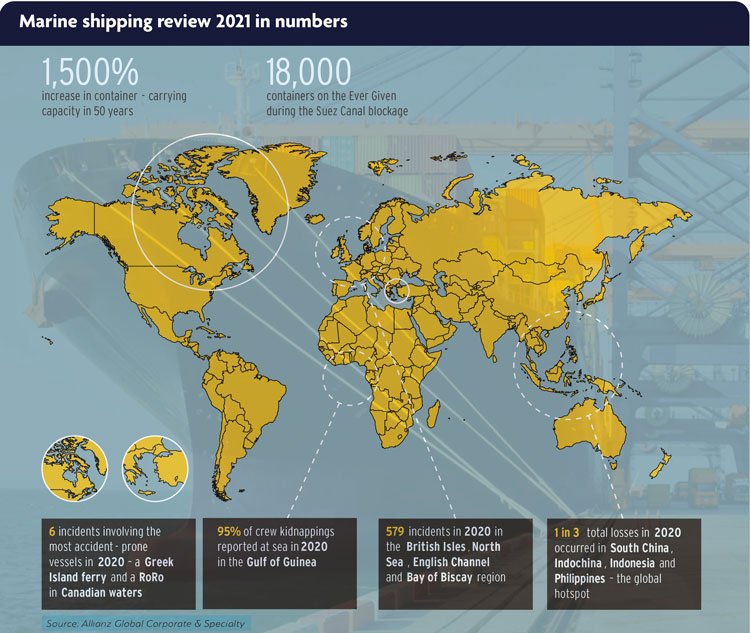 Despite the devastating economic impact of COVID‐19, the effect on maritime trade has been less than first feared, demonstrating the resilience of the shipping industry, according to Allianz Global Corporate & Specialty’s latest Safety and Shipping Review 2021.

According to the report, global seaborne trade volumes declined only by around 3.6% in 2020, and are on course to surpass 2019 levels this year.

While the cruise industry and the car carrier segment have been worst affected by the pandemic, the industry’s three largest markets – tankers, bulkers and containers – have been quick to recover. Global container throughput in  the first months of 2021 exceeded pre‐pandemic levels.

However, it says, the recovery is volatile and dependent on the success of vaccinations and the ongoing effects of the pandemic. Surges in demand for goods combined with COVID‐19‐related delays at ports and shipping capacity management problems have led to congestion at peak times and a shortage of empty containers, particularly in Asia, highlighting the need for effective backhaul of empty containers in the shipping sector.

According to AGCS, the global nature of the sector, and the lack of spare capacity within it, means problems in one region can have ripple effects around the world. In June 2021 it was estimated that there was a record total of 300 freighters awaiting to enter overcrowded ports.

The crew change situation is a humanitarian crisis which continues to have a major impact on the health and wellbeing of seafarers, says AGCS. In March 2021, it was estimated that some 200,000 seafarers remained on board vessels with a similar number urgently needing to join ships to  replace them. Extended periods at sea can lead to mental fatigue and poor decision making, which ultimately impact safety. Crewing issues came under the spotlight in the wake of the Wakashio incident in July 2020 when the vessel ran aground off the coast of Mauritius, spilling oil in the process.

“With so many crew members stuck on board vessels there are serious concerns for the next generation of seafarers,” the report says. “COVID‐19 is impacting training and development and the sector may struggle to attract new talent due to working conditions. Any shortage could impact the surge in demand for shipping as the economy and international trade rebounds.”

It adds, however, that overall, COVID‐19 has had only limited impact on marine claims to date:

“Hull insurance has seen little direct impact. Marine liability insurers are expected to face passenger liability claims from cruise ships. Cargo insurers have seen an uptick in perishable goods claims. However, the surge in demand for shipping, coupled with the pandemic, has put shipyards under pressure. There is an increased cost of hull and machinery claims due to delays in the manufacture and delivery of spare parts, as well as a squeeze on available shipyard space.”

The costs of salvage and repairs has also increased, it suggests. Potentially, insurers could see an uptick in machinery breakdown claims if COVID‐19 has affected crews’ ability to carry out maintenance or follow manufacturers’ protocols. Machinery breakdown claims could arise from the reactivation of the cruise ship industry if maintenance protocols have not been followed – there have also been fires on board vessels in lay‐up.

The Gulf of Guinea has emerged as the world’s piracy hotspot, accounting for over 95% of crew numbers kidnapped worldwide in 2020, according to AGCS. Last year, it says, 130 crew were kidnapped in 22 separate incidents in the region – the highest ever – and the problem has continued in 2021. Vessels are being targeted further away from the shore – over 200 nautical miles (nm) from land in some cases. The COVID‐19 pandemic could exacerbate piracy as it is tied to underlying social, political and economic problems, which could deteriorate further. Former hotspots like Somalia could even re‐emerge.

The crippling ransomware attack against the Colonial oil pipeline in the US in May 2021 should be a wake‐up call for the maritime industry, AGCS suggests:

“As a critical part of the global supply chain, the shipping industry could increasingly become an attractive target for criminals and politically motivated attacks. All four of the world’s largest shipping companies have already been hit by cyber-attacks. Shipping and logistics firms experienced three times as many ransomware attacks last year as in 2019.”

Geopolitical conflict is increasingly played out in cyber space, it adds: “Recent years have seen a growing number of GPS spoofing incidents, particularly in the Middle East and China, which can cause vessels to believe they are in a different position than they actually are. Concerns have been growing about a potential cyber-attack on critical maritime infrastructure, such as a major port or shipping route. Although an accident, the Suez Canal blockage shows the disruption a momentary loss of propulsion or steering failure can cause. Increased awareness of – and regulation around – cyber risk is translating into an uptake of cyber insurance by shipping companies, although mostly for shore‐based operations to date.”

Another observation is that the burden of international sanctions continues to rise, posing both a compliance and safety risk. In a worrying development, AGCS says, some vessels have been switching off Automatic Identification Systems (AIS) as they seek to hide their location and defy US sanctions. This can obviously have a detrimental impact, given the potential for a serious incident to occur, such as a collision.

This is an abridged and edited version of the full report. To access the report click here. 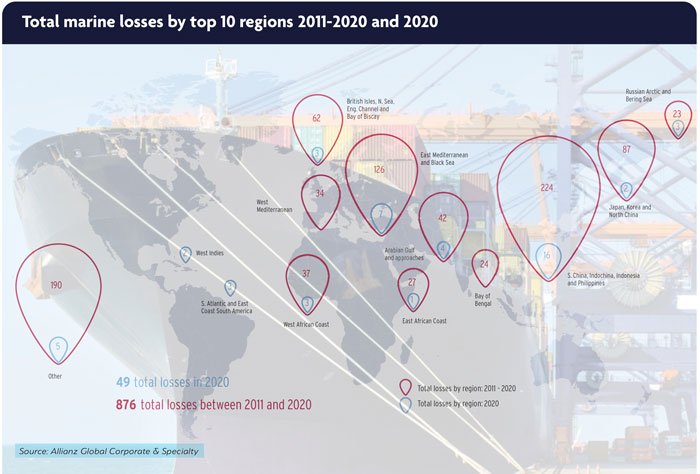 According to AGCS, the global nature of the sector, and the lack of spare capacity within it, means problems in one region can have ripple effects around the world. In June 2021 it was estimated that there was a record total of 300 freighters awaiting to enter overcrowded ports.