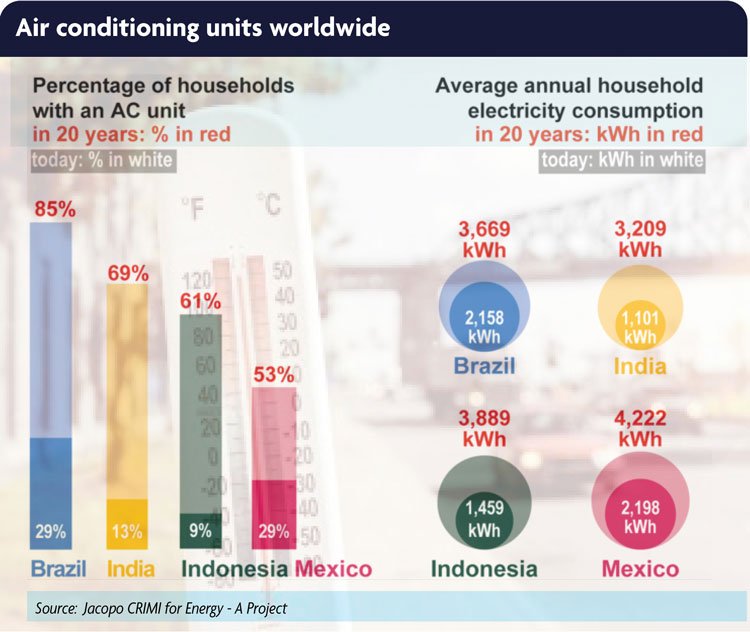 There are new warnings that up to 100 million people will be unable to cool their living spaces as the pace of climate change increase.

It comes amid fears the rise of air-conditioning (AC) is on the brink of becoming a new emergency, adding unprecedented challenges to the already difficult task of decarbonising the economy and reducing emissions.

As temperatures continue to rise, and despite a growth in incomes, a significant share of people living in emerging economies will not be able to afford the use of AC to cool themselves adequately.

New research looking at India, Brazil, Mexico and Indonesia predicted that by 2040 between 64 and 100 million households will not be able to meet their cooling requirements, finding themselves in a situation of potential discomfort. This will be particularly pronounced in states with high urbanisation levels, hot and humid climates, or poor economic conditions.

The study, led by Enrica De Cian, professor of Environmental economics at Ca’ Foscari University of Venice and Scientist at Fondazione Centro Euro-Mediterraneo sui Cambiamenti Climatici, analyses the determining factors driving the emerging cooling crisis with an evaluation of its consequences in 2040. This study, funded by the European Research Council, provides the first multi-country, comparative analysis of how climate and household characteristics, including income, drive air-conditioning adoption in four emerging countries: Brazil, India, Indonesia, and Mexico.

It predicts AC adoption rates will leap over the next 20 years, leading to more than half of households being equipped with an AC unit: 85% in Brazil, 61% in Indonesia and 69% India. This will also lead to an increase in electricity consumption, which will triple in India and Indonesia, and almost double in Mexico and Brazil.

“Adoption of air-conditioning across states will increase in all socio-economic and climate scenarios considered and the demand for the large amounts of energy needed to power all these new appliances will also generate CO2 emissions,” stated the report. “Future research is needed to look at the potential environmental consequences of this vicious cycle.”

It said the role of income and climate in future projections has been overestimated in previous studies, due to a failure to consider household characteristics.

“It is not just a story of a changing climate or affluence levels, which are improving. Our results suggest that AC adoption patterns are determined by multiple drivers, with different importance across countries,” said De Cian.

Indeed, in emerging economies, the decision to purchase air-conditioning in response to warmer climatic conditions is strongly anchored to socio-economic and demographic characteristics, he explained. However, besides income, what really appears to influence decisions to purchase an AC unit are housing conditions, education, employment, gender, age of the household’s head, and whether they live in urban or rural areas.

“The actual and potential demand for air-conditioning should be interpreted in a broader sense as a measurable proxy of the needs for improved thermal comfort,” stated the research. “And this is how our new concept of adaptation cooling gap should be used. For example, the state of Rio de Janeiro today is in a situation of high exposure to degree days and of higher-than-average AC adoption, but in the future it is expected to transit to a situation of greater thermal discomfort with increased exposure to degree days but lower-than-average AC adoption.”

“Increasing the use of electricity for residential space cooling is a form of adaptation that helps relieve people from heat stress but it is no panacea, as electricity expenditure will limit opportunities among the lowest income households. Even those with air-conditioning will be exposed to a new condition of vulnerability related to supply shortage in the power sector, such as the recent Canadian experience, or degraded power stability. The implication is that it is imperative to manage the growing appetite for residential space cooling by using a mix of efficiency measures, policies, and technologies,” explained Roberto Schaeffer from the Energy Planning Program at the Universidade Federal do Rio de Janeiro.