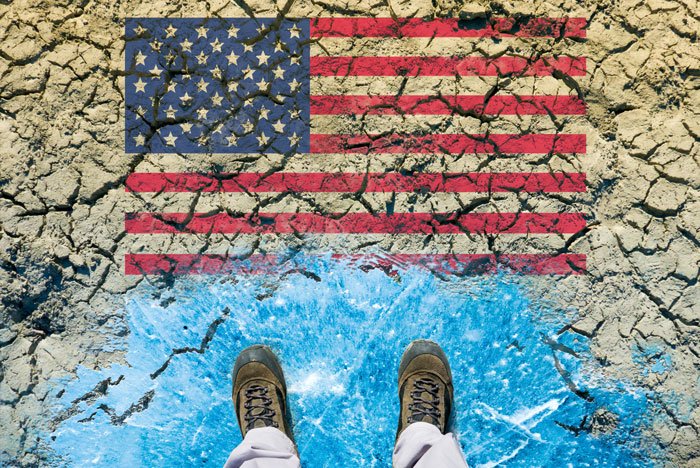 The majority of Americans say they would be prepared to pay more to support efforts to tackle the threat of climate change, but their support does not stretch to outside of their borders.

A new survey from Energy Policy Institute at the University of Chicago (EPIC) and The Associated Press-NORC Centre for Public Affairs Research found nearly six in ten Americans believe the pace of climate change is increasing, with most support policies to confront it and are willing to pay more in their energy bills to combat it.

When asked about their support for a nationwide fee on carbon emissions, the survey indicated that Americans on average are willing to pay $40 a month for the fee, up from $27 a month when asked a similar question in 2018. This is roughly equal to a carbon price of $30 per ton, double the $15 per ton carbon price being debated in the Senate and more than the projected cost of previously proposed policies that would have cost the average household about $15 per month.

Half of Americans are willing to pay something to combat climate change. Given options that ranged from as low as $1 to as high as $100, support for a carbon fee was strongest for lower dollar amounts and declined as the proposed impact on energy bills increased. Still, 31% of Americans would support the fee even if it meant paying $100 more for their energy every month. That is more than double the share who said so in the 2018 survey. When told how these carbon fees would be used, Americans’ willingness to pay varied modestly. However, just 46%, supported providing funding to poorer countries to develop their economies using clean energy sources. Twenty-one percent oppose the measure.

“The survey illustrates that Americans are willing to spend their own money to fight climate,” said Michael Greenstone, director of EPIC and the Milton Friedman Distinguished Service Professor in Economics at the University of Chicago. “There is meaningful support for carbon pricing among Americans, yet to date we remain the only holdout among the G7 countries. As Congress grapples with these issues once again, there is a golden opportunity for leaders to be responsive both to the needs of the planet and the views of the American people.”

The poll also asked respondents to consider a broad suite of clean energy policies, many being debated by Congress and the Administration. More than half of Americans support, and only 16 percent oppose, a clean electricity standard that would increase the share of energy coming from clean electricity sources and decrease reliance on traditional sources like coal and natural gas. Democrats overwhelmingly support the measure, while more Republicans support than oppose it.

When it comes to addressing transportation emissions, the largest source of U.S. greenhouse gas emissions, around half would support a variety of policies polled to transition to electric vehicles. Americans are more likely to support tax incentives or cash rebates to encourage consumers to buy more electric vehicles over government rules. Notably, however, more Americans support than oppose requiring all new vehicles to be electric.

“Climate change is becoming a more pressing issue for many Americans,” said Jennifer Benz deputy director of The AP-NORC Centre. “More Americans consider climate change personally important to them compared to three years ago, and three-quarters of the public report taking personal actions to try and combat it like buying energy-efficient appliances or changing behaviours like driving less.”

The survey said the majority’s support of new policies came as half of Americans are more convinced by the science that climate change is happening than they were five years ago, including about a third of Republicans and two-thirds of Democrats. And while the economy and health care remain the most pressing issues for Americans, 59% say climate change is very or extremely important to them. That share is up from 49% who said the same in 2018 (35% of Republicans, up from 22%, and 80% of Democrats, up from 71%).

Half of Americans are willing to pay something to combat climate change. Given options that ranged from as low as $1 to as high as $100, support for a carbon fee was strongest for lower dollar amounts and declined as the proposed impact on energy bills increased. Still, 31% of Americans would support the fee even if it meant paying $100 more for their energy every month.