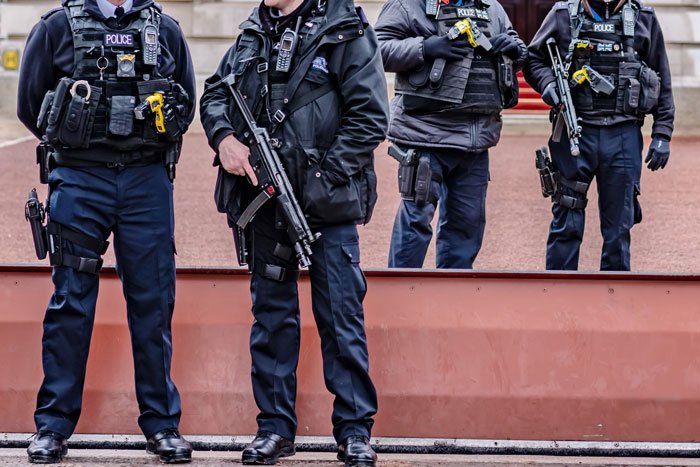 Armed police carrying sub machine guns have started patrolling the streets of the City of London as the UK eases its lockdown restrictions.

Two patrol teams were circulating around ‘The Gherkin’ building yesterday (5 May) as City workers returned to eat and drink at outside tables, taking advantage of the latest relaxations with regard to the COVID-19 lockdown.

The move represents an escalation in the police’s visible armed response to the perceived terrorist threat and is likely to become a common site in parts of the capital as the authorities step up their counter-terror efforts.

This summer armed counter-terrorism police will also board London buses and patrol bus stops and stations as part of a team dedicated to thwarting terrorist attacks in the capital.

The Met police has confirmed the new team will be backed by armed officers and will also patrol transport interchanges and carry out regular vehicle checks in key locations across the city.

The officers, part of the Met’s Roads and Transport Policing Command (RTPC), will also use sniffer dogs and number plate recognition during patrols while some officers will be stationed in CCTV control rooms to monitor the city.

The sight of officers with machine guns on the streets is not unexpected, however. Last month the country’s most senior police officer responsible for ensuring the UK is protected against the threat of terrorism warned businesses and the public that they must be alert to more than just the threat of Covid-19 this summer.

He has appealed for business owners and the public at large to support the police’s 24/7 efforts to keep the country safe by remaining vigilant, and reporting anything that doesn’t seem right to security staff or the police.

The threat to the UK from terrorism remains at SUBSTANTIAL, meaning an attack is likely, and as public places such as non-essential shops, hospitality and sports events begin to open up, the security experts at Counter Terrorism Policing have launched a new vigilance campaign to encourage everyone to help the police tackle terrorism and save lives by reporting any concerns.

Twist has urged the public to “do their bit in protecting the UK from terrorism” by completing the official Action Counters Terrorism online e-learning for free.

Taking just 45 minutes to complete, the online training provides the latest advice from counter terrorism experts, informing how to react in the unlikely event of a terror attack and how to spot and report suspicious activity and behaviour.”

The public has been asked to visit https://ct.highfieldelearning.com/ to register for access.

0
SHARE:
Closing the gap between portfolio strategy and frontline execution