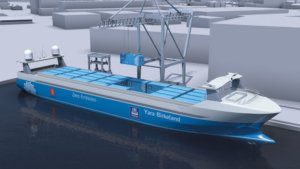 The ability for the maritime sector to implement autonomous vessels is decades away according to a leading broker.

Ben Dillion P&I Specialist at Marsh, writing in the broker’s Protection & Indemnity Review 2019 said the benefits of autonomous vessels will be significant in terms of claims reduction. However he adds there is much to be done before we will see them on the seas in any significant numbers.

He added: “Regardless of your position on autonomous shipping, it is, like blockchain, a hot topic within the maritime industry and one that will in some way impact us. The question is whether we will actually see fully autonomous vessels in the near future, and to what degree will they affect the P&I industry.”

Mr Dillion added with the Yara Birkeland (pic) due to launch as early as next year and the Shipowners Club rolling out its Maritime Autonomous Vessel Liability Insurance policy this year, it could be argued that the Autonomous Age is dawning. Rolls-Royce Marine a joint venture partner in the Yara Birkeland , predicts that that by 2030 autonomous ships will be a common sight on the oceans.

But not all in the industry believe that autonomous vessels will be introduced as rapidly. The Nautilus Institute, suggests the commonplace use of autonomous vessels in international shipping trade is about 20 years from now. And Søren Skou, chief executive of Maersk, has been quoted as saying: “I don’t expect we will be allowed to sail around with 400-metre-long container ships weighing 200,000 tonnes without any human beings on board”.

“One major hurdle to rolling out autonomous vessels is a change to the current regulatory framework that International Group Clubs require their members to follow to ensure their vessels remain in a seaworthy condition and remain within cover,” explained Mr Dillion. “The process began in 2018 when the International Maritime Organization (IMO) Maritime Safety Committee (MSC) started a two-year scoping exercise to identify the extent to which they may need to amend the regulatory framework to enable the safe operation of automated vessels.”

“Add to this the predicted pecuniary cost of a fully automated vessel eroding a shipping company’s profitability and the prospect of fully automated, clean fuelled ships seems no more than a pipe dream and their effect on the P&I industry nullified by commercial considerations,” he added. “This is, of course, before the various and increasingly powerful health and safety executives have had their say.

“More likely appear to be vessels as identified by the survey carried out by the Nautilus Federation in 2018, which highlighted that 80% of those maritime professionals surveyed thought autonomous shipboard systems on board manned ships would be the safest route to the implementation of autonomous technology in shipping.”

Some of the building blocks are in place in terms of the fixed premium cover offered by the Standard Club and there are vessels under development and trial but there are regulatory issues to be solved and the vessels themselves are still under development.

Mr Dillion believes that if the industry can solve the issues the benefits are clear to underwriters and maritime companies alike.

“If and when we see the roll out of fully autonomous seagoing vessels and when international maritime regulations are altered to fit their risk profile, cost savings should follow,” he explained. “With manned ships, the ‘human element’ has largely been reported as a major cause of all maritime casualties, and we are told that people-related claims represent in excess of 30% of the overall cost of P&I claims. Therefore, removing the human element through the use of fully autonomous vessels should present savings in terms of the cost of claims, not only in terms of crew claims, but all claims involving human error. As a result, clubs should be able to offer significantly reduced premium due to the reduced risk.”