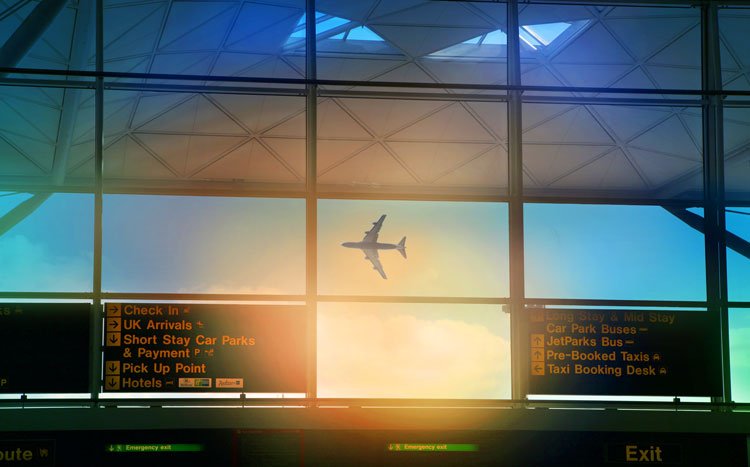 According to AGCS, the sudden halt imposed on aviation by the pandemic means the industry was hit faster and harder than most other sectors. At one point during the crisis, two‐thirds of the global fleet sat idle on the tarmac.

Figures from the International Air Transport Association (IATA)1 show passenger traffic, as measured by industry‐wide revenue passenger kilometres (RPKs) was down 90% in April 2020 compared to the previous year. The figures for March 2021 show an improvement. While RPKs remain 67% lower than March 2019, largely due to limited international travel, there was a strong recovery in domestic travel, led by the US.

However, the report adds, the industry is slowly rebounding and as more aircraft return to the skies, and there has been much discussion about the hazards that may arise from such an unprecedented period, as well as some of the changes the sector will see.

One such hazard, it suggests, is air rage. In May 2021, an attendant on a Southwest airline flight had two teeth knocked out after an altercation with a passenger over wearing a mask. It was the latest in a spate of highly publicized incidents that moved the FAA to later issue a warning about a spike in unruly or dangerous behaviour aboard passenger planes.

In a typical year in the US, there are often no more than 150 reports of serious onboard disruption. In 2021, that number had already jumped to around 3,000 by June, including about 2,300 incidents involving passengers who refused to comply with the federal mandate to wear a mask while traveling.

Inflight incidents have also been tracked by IATA since 2007. The numbers have been steadily increasing but the pandemic added a whole new host of pressures. Now flight crews are bearing the burden of enforcing mask mandates in an already stressful environment.

Although Carmen Paul, an Airline Claims Manager at AGCS says this trend isn’t yet translating into significant claims activity, Paul acknowledges that there is the possibility that such disruptive or disorderly passengers may later claim they were discriminated against  by the airline in question.

“If such claims do arise from cases which have clearly involved disruptive or disorderly passengers it would be something we would push back hard on,” says Paul. “But as insurers we have to be aware of this trend and stay on top of it.”

Another unusual Covid‐19 consequence, according to AGCS, relates to the impact of having members of the insect world resident in mothballed aircraft. The European Aviation Safety Agency12 has reported an “alarming trend” in the number of reports of unreliable airspeed and altitude readings during the first flight(s) after some planes have left storage. In most cases, the problem was traced back to undetected insect nests inside the aircraft’s pitot tubes, pressure‐sensitive sensors that feed key data to an avionics computer. This has led to a number of Rejected Take-off (RTO) and In‐Flight Turn Back (IFTB) events.

In June 2021 UK safety regulators also urged pilots to pay close attention to speed checks during the take-off roll, after three incidents in three days at London Heathrow involving suspected pitot blockage by insects. However, the report says that while insurers are aware of such incidents, they have yet to manifest into claims activity.

The risk of such contamination is increased, if the aircraft storage/de‐storage procedures have not been completely or improperly applied at the beginning, during or at the end of the storage period. Thorough testing of the aircraft systems before use is the norm and should alleviate these issues, although it is yet another example of the range of challenges the aviation sector may face in coming months.

Another emerging risk in the aviation sector relates to pilot shortage, according to AGCS. The initial response of many airlines to the pandemic involved furloughs, hiring freezes and layoffs to conserve cash. It, therefore, seems odd that the industry faces an imminent shortage of pilots, but Covid‐19 merely paused a longer‐term problem.

It says that the tremendous increase in air travel experienced in the years before the pandemic – annual air passenger growth in China alone was 10%+ a year from 2011 – meant demand for pilots was already outstripping supply. This problem is re-emerging as more aircraft return to the skies.

Training and simulator provider CAE estimated at the end of last year that the global civil aviation industry will require an estimated 27,000 new pilots by the end of 2021. Some 264,000 new pilots would be required over the coming decade. Part of the demand is driven by expected growth but also “age‐based retirements  and attrition.”

According to CAE, pilots over 50 years of age represent 38% of the total civil aviation pilot pool. Some 3.8% of commercial pilots are expected to retire or leave the profession every year over the next 10 years. In the US, some 27,000 pilots are due to retire over the next decade at American Airlines, Delta Air Lines and United Airlines alone. More than 10,000 of those retirements will come over the next five years.

“If you are young, it is a good time to be studying for your pilot license,” says Kevin Murphy, a Director in the Aviation Products & Major Claims Unit at AGCS. “Covid‐19 merely deferred an imminent issue facing the industry.”

Some airlines are building their own pipelines of pilots by establishing their own flight schools but growing activity at flight schools also has the potential to result in an uptick in risk, the report notes, adding that the growing demand is driving up the value of aircraft used in schools, which increasingly use more sophisticated planes to train pilots. The average insured value of airplanes in some schools has increased from around $100,000 in the past to $1mn today.

Given the nature of training, it says,  flying schools are prone to accidents but claims are becoming more expensive with rising values and increased activity. Landing accidents are most common, but insurers have also seen total losses. In addition, as aircraft values increase in this arena, this can result in potentially higher repair costs and longer repair times.

“We were already seeing the effect of pilot shortages on airlines and in general aviation before the pandemic,” says Dave Warfel, a regional head of Aviation at AGCS. “The demand for air crews and pilots is re-emerging and in less regulated countries, shortages can lead to pilots operating commercial aircraft with limited qualifications and low overall flying time.”

“Pilot fatigue is also a known risk among existing pilots that must be properly managed. Fortunately, there is a lot of industry expertise and resources available to assist airlines in building proper fatigue management systems.” 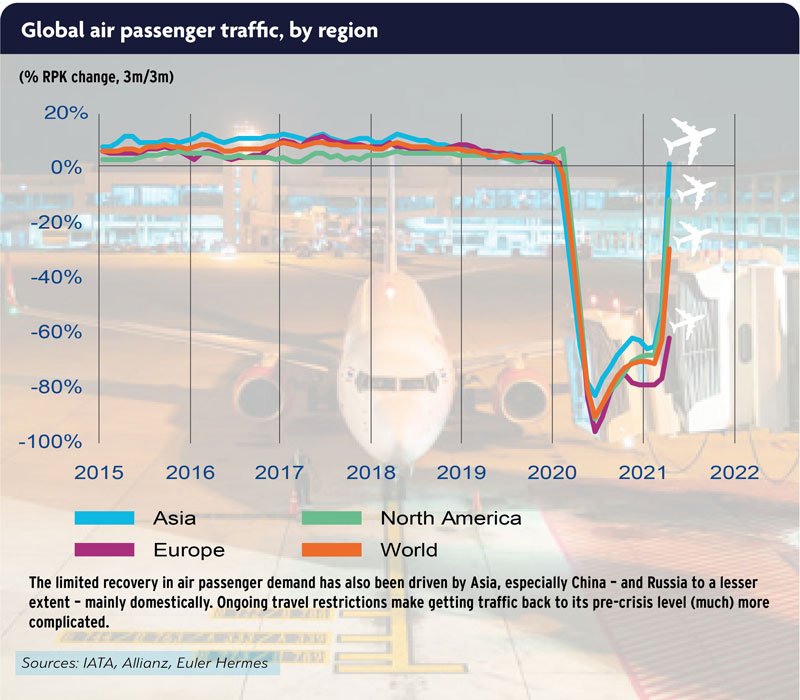 In a typical year in the US, there are often no more than 150 reports of serious onboard disruption. In 2021, that number had already jumped to around 3,000 by June, including about 2,300 incidents involving passengers who refused to comply with the federal mandate to wear a mask while traveling. 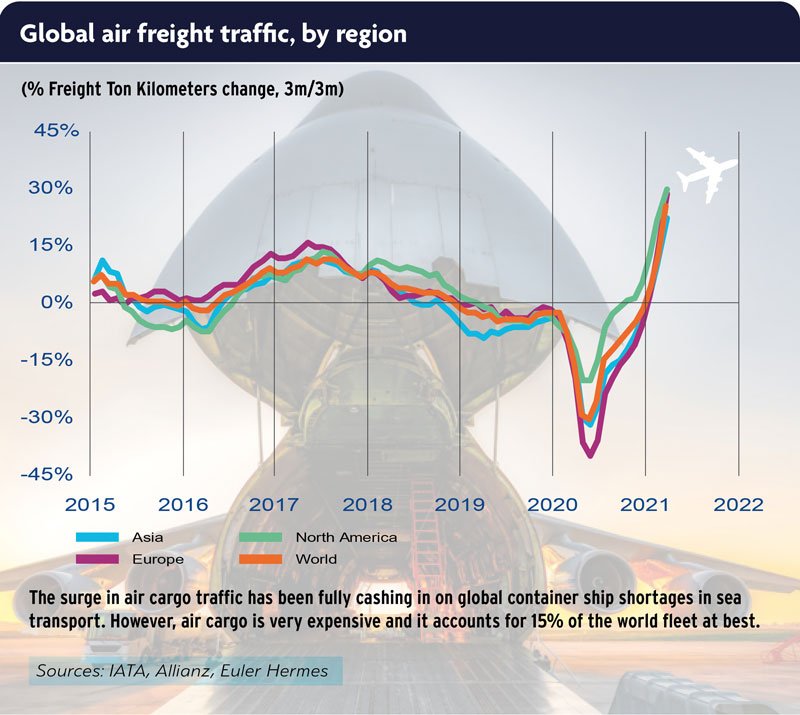