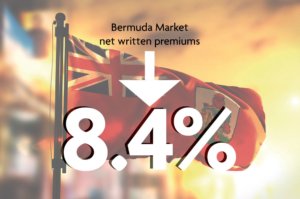 Despite the fact that Bermuda re/insurers returned to underwriting profits in 2018 and saw moderate net income improvement despite above-average catastrophe losses, they still have challenges to overcome.

Ratings firm Fitch issued its report on the Bermuda market which highlighted that net written premiums declined by 8.4% in response to the passage of the base erosion and anti-abuse tax (BEAT). Increasing excise taxes in 2019 to 10% from 5% are expected to inhibit 2019 net premium volume further.

The 22 Bermuda re/insurers in Fitch’s sample reported a 99% 2018 combined ratio, a strong improvement from 108% in 2017 but significantly higher than the 93% ratio average over the prior five years. Catastrophe losses from Hurricanes Michael and Florence, Typhoon Jebi and the California wildfires contributed to this, despite being lower than 2017 losses from Hurricanes Harvey, Irma and Maria. Net income moderately improved for the group as underwriting improvement was offset by significant realized losses on investment amidst weaker equity market performance in 2018. The group’s return on equity improved to a still-below-average 3.4% in 2018.

“Earnings are poised to improve in 2019 as pricing trends shift across the market and catastrophe losses through the third quarter revert toward historical norms,” said Ryan Ostrowski, Analyst at Fitch Ratings. “Premium rate increases appear sustainable into 2020.”

M&A activity is having less influence, with no major deals announced in 2019 so far. Companies are focused on organic growth as price increases, terms and conditions get favourable uplift. At the moment, activity seems temporarily at a standstill.