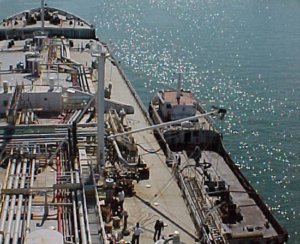 Stuart Edmonston, Loss Prevention Director at UK P&I Club, discusses a poorly planned bunkering operation, which led to a bunker spill, and advises on the lessons that can be learnt from this incident.

“A bulk carrier was to bunker 215 metric tons of intermediate fuel oil from a supply barge. The bunkers were to be received in a pair of empty topside tanks, each with a capacity of 200 cubic metres. According to the company safety management system procedures, bunker tanks were not to be filled in excess of 85% capacity which corresponded to a minimum ullage of 55cm.

“The task of performing the bunkering operation was delegated by the chief engineer to the third engineer. Once the bunker transfer hose was connected, the operation started at 3.20pm filling only the starboard side tank. At 4.30pm, the third engineer recorded the ullage of the tanker at 51cm, and yet bunkering operations continued. At 4.35pm he saw the ullage had reduced to 35cm. He rushed to the engine room to divert the bunkers into the empty port side tank, but by the time he reached the valve station, the starboard side tank was already overflowing on deck with oil spilling overboard

“This was a poorly planned bunkering operation caused by a serious neglect of the company SMS (Safety Management Systems) procedures.

“The chief engineer completed the bunkering checklist on his office PC instead of doing it with the participation of the third engineer at the site of the job, resulting in some checks being overlooked. The failure of the third engineer to closely monitor the filling of the tank and his lack of awareness of the minimum ullage figure led to a critical loss of control. This was compounded by his lack of support and radio communication with other crew or bunker barge personnel during the operation.

“The bunker tank overflowed from both the forward and aft air ventilators. At the aft ventilator, the save-all quickly filled up with oil which then spilled onto the main deck. At the forward ventilator the save-all did not fill up, however, oil was still able to escape because the drain plug had not been fitted. Despite the main deck scuppers being plugged, oil was able to flow over the deck edge guttering and into the sea.”