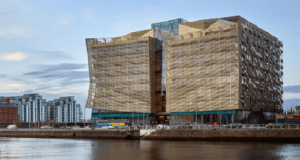 Regulators and politicians in the United States and Ireland are on a collision course with insurers as they insist underwriters honour COVID-19 related claims.

In Ireland the Central Bank (above) has told insurance CEOs they need to take personal roles in the way in which their firms handle claims arising from the pandemic. In the US moves to force underwriters to pay COVID-19 claims have been described as a threat the future of the industry.

The Central Bank of Ireland wrote to CEOs and chairs of insurance companies, warning them to take personal responsibility for how claims relating to Covid-19 are handled. It added that it expected policies would be interpreted in favour of the customer where there was any ambiguity.

“While most insurance policies are clear, if there is a doubt about the meaning of a term, the interpretation most favourable to the consumer should prevail,” the letter said.

Central Bank Deputy Governor Ed Sibley and the Director General of Financial Conduct, Derville Rowland, are due to hold a meeting with the CEOs today amid rising anger in Ireland over what policyholders claim has been insurers’ refusal to honour business interruption claims forcing some firms to collapse

Insurers are also warned to act quickly when claims are made.

In the US There are growing moves by legislators to pass new laws that would effectively force insurers to pay for the costs of businesses having to shutdown as part of the bid to fight the spread of the virus.

The plan to effectively put in place a retrospective new amendment to include business interruption due to pandemics, has been described as a threat the very future of the country’s insurance industry.

“The losses involved would simply swamp the ability to pay,” said Joseph Wayland, general counsel for Chubb. ”It is an existential threat to the industry if it had to take responsibility for a risk it never underwrote and never charged for.”

When asked for his views on the issue by the media, Lloyd’s Chairman Bruce Carnegie Brown, said that such a move would put the industry ”in jeopardy”.

Demand for Wills Leaps Amid COVID-19 Fears
Scroll to top