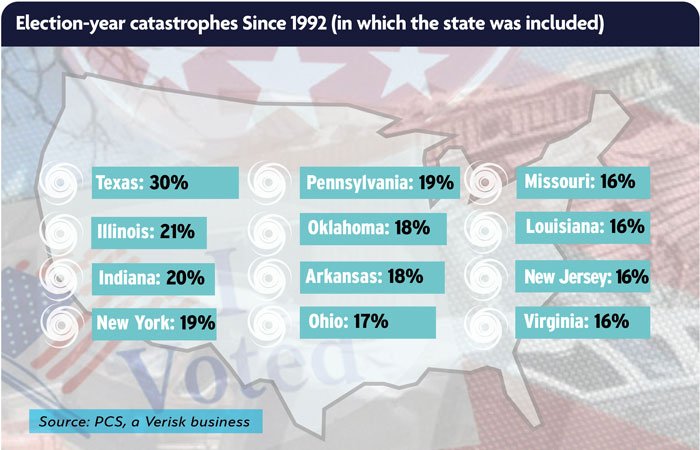 Is there a connection between US presidential election years and catastrophe activity? Tom Johansmeyer, head of PCS, a Verisk business, delves deeper.

Hurricane Zeta could have become one of the most memorable hurricanes in history. Passing through Georgia only five days before the 2020 US presidential election, it could have caused enough localised access issues to shift the small number of votes needed to turn the state. While Georgia alone wouldn’t have turned the election, Hurricane Zeta also hit North Carolina, which was determined by only 74,473 votes. Even though nothing ultimately changed as a result of the fast-moving storm, it should be enough to make you think seriously about community resilience and election risk management – particularly when an election can upend a country’s philosophy on post-catastrophe aid and support.

Based on what we saw as potential – if remote – outcomes from Hurricane Zeta, the PCS team reviewed election-year catastrophe activity since 1952, focusing specifically on major events occurring in October and the early November days before a presidential election. And we didn’t find much. Using as loose a view of ‘significant’ as we could in order to generate enough data to look at, PCS found only six relevant years and nine catastrophe events (all but two of them tropical storm/hurricane) over 18 presidential election years.

Rate of claims per voter

Of course, it takes more than an event adjacent to an election to influence the outcome. It would need to affect states where the difference in votes between the two candidates is narrow enough for access issues and other catastrophe-related impediments to alter voter turnout. To understand this, it helps to look at the rate of claims per voter in addition to the delta between the candidates. PCS found that there have been cases in pre-election catastrophes of high rates of claims per voter and narrow gaps between candidates, but not both.

The pre-election catastrophe and with the highest claims-per-voter rate was Superstorm Sandy, in New Jersey at 14.99 per cent. New York followed at 8.46 per cent for the same event. For both states – along with the other Sandy-affected states with claims-per-voter rates above 1 per cent – the delta in votes secured by each candidate wasn’t close. In fact, only five states have achieved a claims-per-voter rate of above 1 per cent and a single-digit percentage in the delta between the votes cast for the two major candidates: Pennsylvania (2012), New Mexico (2016), Georgia (2020), New Hampshire (2012), and Virginia (2012). Only Georgia’s vote delta in 2020 was below 1 per cent, but the claims per vote cast rate was minimal. Pennsylvania’s (relatively) high rate of claims per voter was still quite small, and the 5 per cent gap between the candidates’ votes isn’t all that close.

Taking a look at what did happen last year, though, could be insightful. Consider Louisiana, for example, which was impacted by Hurricane Zeta. Claims to total votes cast reached 7.24 per cent. That’s almost six times the rate in Georgia. Now, if Georgia had seen that same rate of claims per voter, it could have had more than 350,000 claims, as opposed to less than 70,000. Using claims from the catastrophe as a proxy for local disruption, you can get a sense of how a major catastrophe in Georgia could’ve affected the election’s outcome.

Over the past seven decades, we’ve seen all the different components of an election-shaping catastrophe event – we just haven’t seen them come at the same time. While it’s easy to say the risk is remote, the fact that we can conceive of it suggests that planning and preparation could be beneficial.

In 2020, the COVID-19 pandemic demonstrated that an election could be impacted by external factors. It took effort to adapt to the threat the virus posed, to include both legislative and judicial activity. And the elections proceeded. Preparation could make that process faster, easier, less expensive, and more effective. We don’t need to wait for precedent. We can imagine it, and therefore, we should do our best to get ready for it. 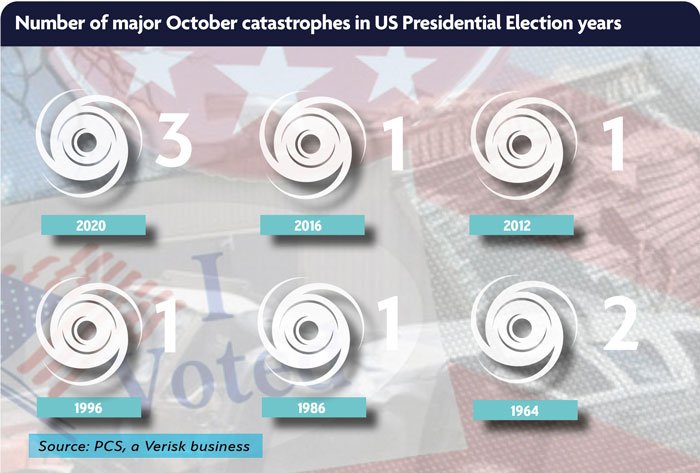 The pre-election catastrophe and with the highest claims-per-voter rate was Superstorm Sandy, in New Jersey at 14.99 per cent. New York followed at 8.46 per cent for the same event. For both states – along with the other Sandy-affected states with claims-per-voter rates above 1 per cent – the delta in votes secured by each candidate wasn’t close.