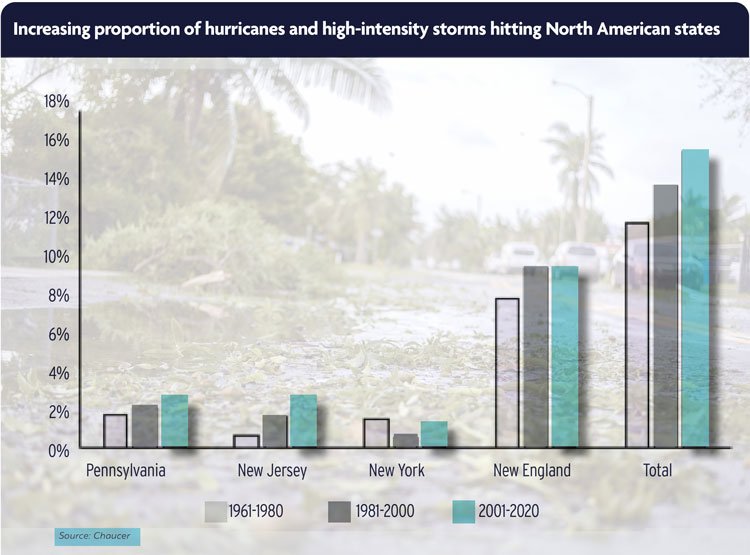 The percentage of US hurricanes and storms that are hitting northern states, such as New York, New Jersey and the states of New England, has now reached 16%, compared to just 12% 40 years ago, according to a study by Chaucer.

The study also shows that the proportion of hurricanes that have hit southern states like Florida and Georgia, as well as Caribbean islands, has dropped from 60% to 54% in the past two decades.

States that fall between these two regions (North and South Carolina, Virginia, Maryland and Delaware) are also being hit by proportionally more hurricanes – 30% of all US hurricanes hit the region between 2001-2020 compared to 24% between 1961-1980.

Chaucer said the study reflects the growing trend of hurricanes moving further north with greater ferocity. This will mean that locations outside of traditional storm hotspots are likely to be affected more often.

The shift in hurricane patterns is also likely to mean that both home and business owners in these areas will need to be prepared for increased storm risks in the years to come, a trend that not all risk models used by insurers have adapted to, the carrier noted.

Dana Foley, head of Catastrophe Research at Chaucer said: “Key aspects of these storms have become more uncertain with the changing climate, and this is driving a need for insurers to redefine their risk models.”

“Whilst areas such a Florida have battled with hurricanes for years and learned to adapt to tropical storms, areas further north are likely to now see an increased intensity of hurricane activity that they may be unprepared for. This is something that insurers will need to factor in when assessing risk.”

Scientists believe there are a number of factors making storms more intense and increasing the risk of substantial damage in those that make landfall, according to Chaucer: climate models also show that hurricanes are becoming slower-moving, which is likely to result in high levels of rainfall from the storms and higher damage -particularly from flooding – spread over a wider area.

An example of a slower-moving hurricane was Category 4 storm Hurricane Harvey in 2017, which unleashed catastrophic damage in Texas, making landfall three times within six days (twice in the US). This was the second costliest hurricane on record in the US, after Hurricane Katrina, causing $125 billion in damages.

CO2 levels, which are now higher than at any point in the last 80,000 years, are causing ocean temperatures to increase, Chaucer said, noting that these warmer conditions bring about increased evaporation, allowing storms to absorb more moisture. This worsens the effects of tropical hurricanes by producing greater rainstorms and flooding when the storm hits land.

Chaucer added that the trend towards higher-intensity, slower storms is increasing damage exposure for clients. Major hurricanes are already by far the costliest natural disasters.

Foley added: “The most severe hurricanes are becoming even more severe. More heat in the system is a key driver of this and it is having other potentially significant impacts, such as extending the distance inland of strong winds after landfall. Many of the historical norms that we have relied on for modelling have to be revisited. As (re)insurers, catastrophe model vendors, industry risk managers we all need to get a better handle on this.”

“We can expect to see the trend of more severe hurricanes continue as long as the climate continues to warm. This will mean higher windspeeds and greater precipitation, which could ultimately lead to more property damage.” 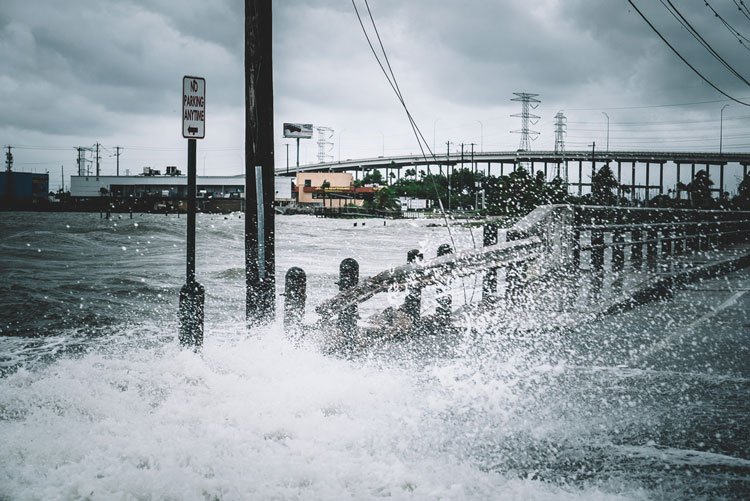 An example of a slower-moving hurricane was Category 4 storm Hurricane Harvey in 2017, which unleashed catastrophic damage in Texas, making landfall three times within six days (twice in the US). This was the second costliest hurricane on record in the US, after Hurricane Katrina, causing $125 billion in damages.