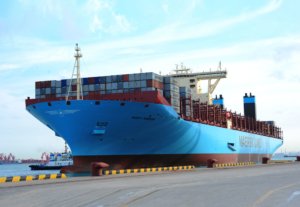 Christmas is on the way Albeit Slowly!!

Seafarers Union Nautilus International, has issued a message that Christmas is coming in the shape of a mammoth container vessel heading for the UK.

The Union said the Mette Maersk has left China bound for the UK, packed with goodies which will ultimately adorn living rooms across the country.

As much as 95 per cent of everything we use and consume as an island nation arrives on these shores by sea, and the Mette Maersk is due to arrive into Felixstowe on 8 December loaded with festive gifts including toys set to be the most sought-after this year.

As the 399-metre-long vessel continues its approach towards the UK, Nautilus International, is taking the vessel’s voyage as an opportunity  to highlight the reliance the nation has on seafarers at Christmas as well as all year round.

As well as the nation’s favourite toys and gifts, the ingredients for much of the traditional Christmas dinner is also delivered by seafarers, having travelled up to 90,149 miles by sea before reaching our supermarket shelves – more than three and a half times the circumference of the world.

With cranberries from the USA and Christmas crackers from China, the nation’s seafarers truly are Santa’s little helpers – facilitating a merry Christmas for people up and down the country.

The UK relies on the maritime industry and seafarers all year round, not just at Christmas, with the sector supporting £40 billion in business turnover and 185,700 jobs. Despite the UK’s reliance on the industry, the number of seafarers active in the UK has fallen by 75 per cent since 1975.

General secretary of Nautilus International, Mark Dickinson, said: “Many people are unaware of how imports reach us as an island nation, but the fact is that almost everything comes to us by sea.

“It is a simple fact that without seafarers – working in often challenging conditions and spending significant periods of time away from home – we wouldn’t have Christmas as we know it.

“We must recognise, protect and celebrate the incredible work of our maritime professionals to safeguard our economic resilience as well as wish them a Merry Christmas wherever they are in the world.”