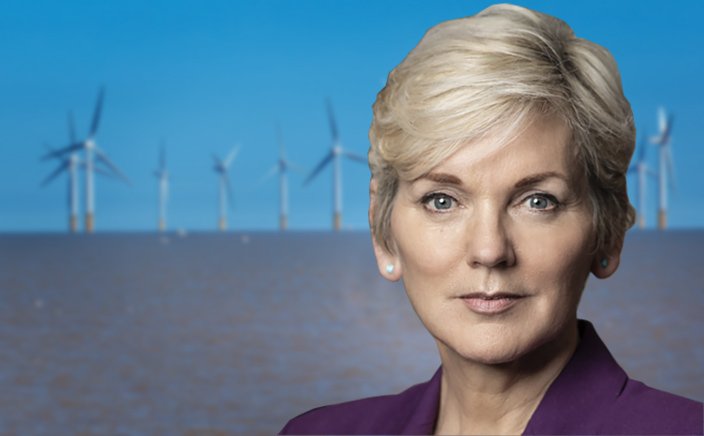 As UK Prime Minister Boris Johnson told the United Nations it was time for humankind to grow up and tackle climate change. U.S. Secretary of Energy Jennifer Granholm has warned any viable climate solution has to be global.

Speaking to the media after the latest meeting of the Partnership for Transatlantic Energy and Climate Cooperation (PTECC) in Poland she said that the move to clean energy delivered a $23 trillion opportunity for businesses.

“So we’re facing a moment of crisis,” explained Granholm. “As President Biden said at the United Nations General Assembly, we are fast approaching a point of no return.  You’ve seen explosive wildfires in Greece and in California and in Siberia, to across continents these heatwaves are unrelenting and only getting worse. And as the IPCC has warned, if we do not cut emissions quickly, these extreme weather events will continue to get worse.

“All of these countries have signed on to Paris Agreements and to aggressive and ambitious commitments, and that all requires products that reduce greenhouse gas emissions. So those technologies will be a $23 trillion market by the end of this decade – $23 trillion dollars. That’s an enormous potential to countries on both sides of the Atlantic.”

She added: “That $23 trillion dollar market is going to give us a chance to launch new businesses within growing industries to attract billions of dollars of new investment, and certainly to create millions of new jobs. It’s going to help improve the health of our citizens. It’s going to increase the wealth of their families. And it’s all because of deploying technologies that are already available as well as investing in the research and development of technologies that will achieve breakthroughs to help us achieve our common goals. And that’s why we’re eager to engage our allies like Poland, here and around the world, and an effort to tackle this climate crisis while growing our economies with clean energy.”

The partnership was also rebranded this year with P-TEC becoming P-TECC.

“We added Climate because we cannot talk about energy without talking about climate,” explained Granholm. “The two are one harmonious conversation, one united mission. It signals our strong support for the Three Seas Initiative.  It signals our close coordination with the European Commission.  And that signal of adding climate and energy together also emphasises the need to diversify energy sources and to strengthen energy security in Central and Eastern Europe.”

When asked how she felt Europe was doing in its efforts to fight climate change Granholm said the fight against climate change was only as strong as its weakest link and as such there needed to be a truly global response.

“Europe is certainly ambitious,” she said. “The United States has put forward a plan that is very ambitious.  Together, we’re very ambitious.  But none of it is enough yet, because it’s a global problem.  So we have to continue to accelerate our ambition, we have to do it with urgency, and we’ve got to get our global partners to do the same since we are all in this together.”

“The President’s Build Back Better Agenda includes getting 100 percent of the U.S.’s electricity from clean sources by 2035.  It involves reducing our CO2 emissions by over 50 percent by 2030 and getting to net zero by 2050.  That’s very ambitious.  We’ve got a lot of work to do.  We have to get a Congress that’s on board with his plan to be able to make sure that the policies that he’s put forward are passed so we can achieve those ambitious goals. I know Europe is working on similar measures.

“But our department, the Department of Energy, it’s one of the reasons why we’re here in Poland, is because we have been talking about a partnership in the area of nuclear. Nuclear technology is clean baseload power, and we want to make sure that those countries that want access to nuclear can have it, and we’re really excited that we may have this partnership here with Poland, but other countries can also adopt not just nuclear, solar, wind, hydropower, onshore/offshore wind.

“We want to make sure geothermal is a piece of the solution.  Energy efficiency technologies. Clean hydrogen. Carbon capture, use, and sequestration.  Biofuels.  Batteries for both storage, batteries for electric vehicles.  There are so many technologies that we can cooperate on and that we all have to be ambitious to make sure that we achieve this goal so that our shared home, this planet, does not continue to experience these extreme weather events and that our people are protected.”