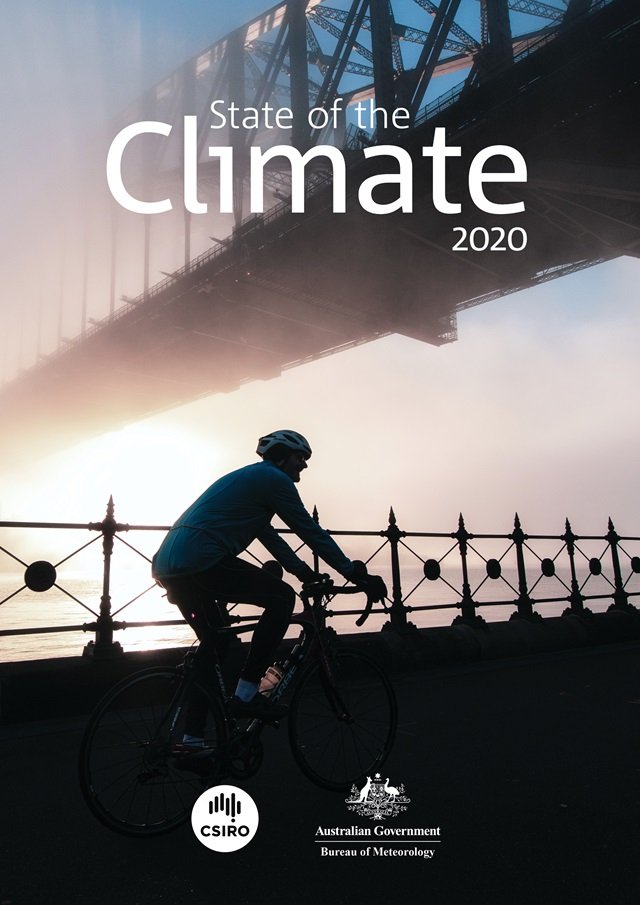 Australia is facing a future of ever more intense climate events as the country’s temperature continues to rise.

Speaking at the publication of the sixth biennial State of the Climate report Commonwealth Scientific and Industrial Research Organisation’s (CSIRO) Climate Science Centre Director Dr Jaci Brown warned the country faced a future of rising threats due to climate change.

State of the Climate 2020 is the sixth report in a series published biennially by the Bureau of Meteorology and CSIRO, which together play a significant role in monitoring, measuring and reporting on weather and climate

“Our science clearly shows that, due to increasing greenhouse gases, such as carbon dioxide, in the atmosphere, Australia’s climate is continuing to warm, and the frequency of extreme events such as bushfires, droughts, and marine heatwaves is growing,” she said.

The Bureau of Meteorology’s Manager of Climate Environmental Prediction Services, Dr Karl Braganza, said the report found the warming trend in Australia was contributing to increases in extreme fire weather and the length of the fire season.

“There has been a significant increase in the frequency of dangerous fire weather days across Australia, particularly during spring and summer, leading to an earlier start to the southern fire season,” Dr Braganza said. “Climate change is influencing these trends through its impact on temperature, rainfall, and relative humidity, and the resulting change to the fuel moisture content.”

While the impact in Australia is the focus of the report it also highlights the global threat that climate change is now presenting.

The report warned despite a decline in global fossil fuel emissions of CO2 in 2020 associated with the COVID-19 pandemic, this will have negligible impact in terms of climate change. Atmospheric CO2 continues to rise, and fossil fuel emissions will remain the principal driver of this growth.

The world’s oceans, especially in the southern hemisphere, are taking up around 90 per cent of the extra energy resulting from enhanced greenhouse gas concentrations.

More than half of all CO2 emissions from human activities are being absorbed by land and ocean sinks, thus slowing the rate of increase in atmospheric CO2.

Global mean sea levels have risen by around 25 cm since 1880 and continue to rise at an accelerating rate.

COVID-19 lockdowns and economic downturn helped reduce global emissions in 2020 but has not been enough to make a discernible impact on carbon dioxide levels in the atmosphere.

Measurements taken at the Cape Grim Baseline Air Pollution Station in northwest Tasmania show that carbon dioxide levels in the atmosphere have been increasing since pre-industrial times (around 1750), with fossil fuel emissions being the principal driver of this growth.

“To build a sustainable, resilient and productive future for Australia, governments, industries and communities need robust climate information,” Dr Brown said. “This report presents a synthesis of our most up-to-date understanding of the changing nature of Australia’s climate, providing a sound base for economic, environmental and social decision-making now and into the future.”

Juliet Bell – Lead, CSIRO’s Climate Mission added: “The signals of climate change are clear in the observed trends described by State of the Climate, and the impacts of this are being observed across the Australian economy now.

“Businesses of all kinds face unprecedented climate risks in the future; the magnitude and consequences of these dependent on the decisions and actions we take today.

“For instance, our decisions around the types of infrastructure we fund, what we grow on our farms, and how we manage our water resources must be resilient to climate change in order for Australia to remain prosperous and secure.

“At CSIRO we are providing Australian businesses, including in the financial services sector, with clear actionable advice and insights on climate risks, transition and adaptation.”