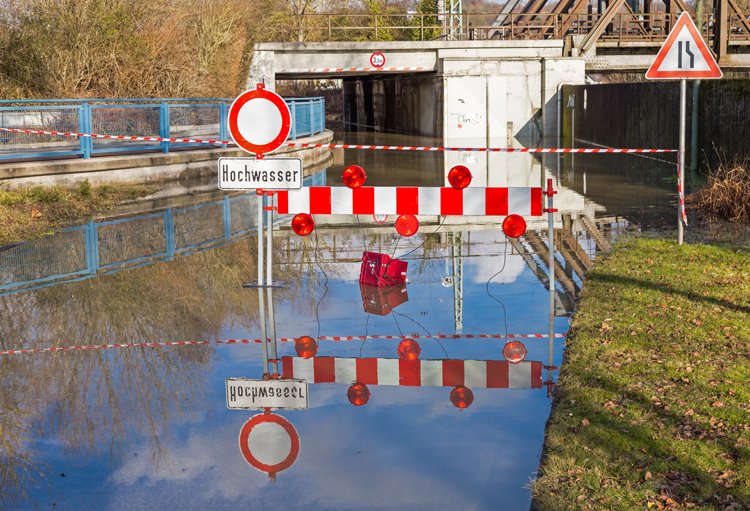 Climate change has made a repeat of the floods which devastated parts of Europe last month up to nine times more likely according to a group of leading climate experts.

The team from World Weather Attribution undertook a study to assess the scope and impact of the heavy rainfall associated with cut-off low-pressure system “Bernd” which led to severe flooding particularly in the German states North Rhine-Westphalia and Rhineland-Palatinate, as well as in Luxembourg, and along the river Meuse and some of its tributaries in Belgium and the Netherlands.

The flooding resulted in at least 184 fatalities in Germany and 38 in Belgium and considerable damage to infrastructure, including houses, motorways and railway lines and bridges and key income sources. Road closures left some places inaccessible for days, cutting off some villages from evacuation routes and emergency response. The worst affected areas were around the rivers Ahr, Erft and Meuse.

The team not only examined the impact of the floods but also the impact of climate change on the severity and frequency of the event and the potential for a repeat.

They found that global warming had an effect on the scale of the flooding and also is set to significantly enhance the potential for a repeat event.

“The severe flooding was caused by very heavy rainfall over a period of 1-2 days, wet conditions already before the event and local hydrological factors,” said the report. “While river discharge and water levels are the physical components most directly linked to the impacts of the event, we focus our assessment on the main meteorological driver, the heavy rainfall event. This is due to the fact that some hydrological monitoring systems were destroyed during the flood and data of sufficiently high quality and quantity is not currently available.”

The observed rainfall amounts in the Ahr/Erft and the Belgian part of the Meuse catchment broke historically observed rainfall records by large margins. “In regions of that size the robust estimation of return values and the detection and attribution of trends is challenging and thus pushes the limits of what current methods of extreme event attribution are designed for,” added the report.

The teams then broadened the analysis by assessing the influence of climate change on similar types of events that could occur anywhere in Western Europe in a large region between the north of the Alps and the Netherlands.

“We found that in the current climate, for a given location within this larger region, we can on average expect one such event every 400 years. That also means we expect such events to occur more frequently than once in 400 years within the larger Western European region,” said the report. “Climate change increased the intensity of the maximum 1-day rainfall event in the summer season in this large region by about 3 – 19% compared to a global climate 1.2 °C cooler than today. The increase is similar for the 2-day event.

“The likelihood of such an event to occur today compared to a 1.2 °C cooler climate has increased by a factor between 1.2 and 9 for the 1-day event in the large region. The increase is again similar for the 2-day event.”

The report concluded: “In summary, our results highlight that at local scale detection of extreme precipitation trends is hindered by variability, but when considering such events occurring over the larger Western Europe region, significant trends attributable to human-induced climate change are evident even if we cannot predict where exactly these events occur.

“All available evidence taken together, including physical understanding, observations over a larger region and different regional climate models give high confidence that human-induced climate change has increased the likelihood and intensity of such an event to occur and these changes will continue in a rapidly warming climate.”