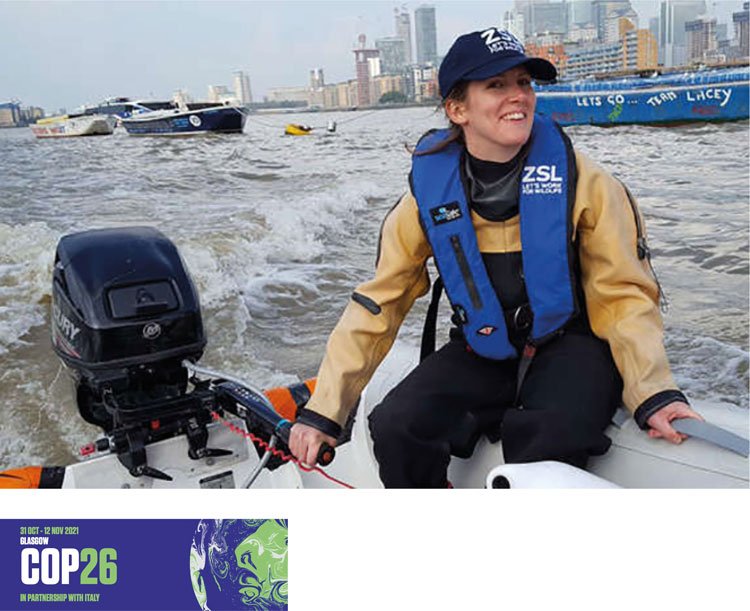 Results of the first complete health check of the River Thames has found climate change is raising the height of the river prompting a call for investment in greater resilience.

Led by ZSL (Zoological Society of London) the first ever State of the Thames Report, used 17 different indicators to assess the health of the Thames’ natural environment. Funded by Royal Bank of Canada the report saw experts from 16 organisations demonstrate what has changed for the Thames since it was declared ‘biologically dead’ in 1957.

There was good news for the river’s wildlife with evidence of an increase in a range of bird species, marine mammals and natural habitats such as carbon-capturing saltmarsh. However, since the early 1990’s, the number of fish species found in the Tidal areas of the river have showed a slight decline.

Of more concern was the growing evidence that climate change has increased the temperature of the UK capital’s waterway by 0.2⁰C per year on average, which combined with associated sea-level rises, paints a worrying picture.

Water levels have been increasing since monitoring began in 1911 in the Tidal Thames. Sea level at Silvertown has been rising 4.26mm per year on average since 1990.  Water temperature also showed a significant increase during summer and winter in both the long-term (2007–2020) and short-term (2015–2020) data sets. As water temperature and sea levels continue to rise above historic baselines, the estuary’s wildlife will be particularly impacted, through changes to species’ lifecycles and ranges.

ZSL Conservation Programme lead for wetland ecosystem recovery, Alison Debney said: “Estuaries are one of our neglected and threatened ecosystems. They provide us with clean water, protection from flooding, and are an important nursery for fish and other wildlife.  The Thames estuary and it’s associated ‘blue carbon’ habitats are critically important in our fight to mitigate climate change and build a strong and resilient future for nature and people.

“This report has enabled us to really look at how far the Thames has come on its journey to recovery since it was declared biologically dead, and in some cases, set baselines to build from in the future.”

Debney continued: “While there have been heavy, historic losses of the natural habitat to urban development, ZSL is working closely with partners to create new estuarine habitat including native oysters, seagrass and saltmarsh habitat. Between them, these not only help to restore wildlife in the river, but also act as natural flood defences, and help to mitigate against extreme weather such as storms and floods.

“A resilient future for both people and wildlife will depend on protecting remaining natural habitats, reconnecting and restoring habitats, and innovating new ways to maximise opportunities for wildlife in the urban environment.”

She added: “This report demonstrates that climate change is clearly impacting the Tidal Thames. ZSL is calling on world leaders to unify solutions to tackle biodiversity loss and climate change and put nature at the heart of all decision making. It will be calling on leaders to make this commitment at COP26 in Glasgow.”

The Environment Agency said it is planning for climate-induced changes, with its Thames Estuary 2100 Plan which sets out a long-term approach for adapting to rising sea levels. ZSL is calling for nature-based solutions to be at the heart of this.

James Brand, Thames Estuary 2100 Advisor at the Environment Agency said: “We are pleased to support the State of the Thames Report. If we are going to tackle the climate emergency, nature needs to be at the heart of our solution, both in slowing the pace of future change and adapting to the changes that we are already seeing.

“The Environment Agency is committed to reaching net zero by 2030 and improving water quality in our rivers. The Thames Estuary 2100 Plan advocates adapting to rising sea levels by thinking holistically about our riversides, incorporating new wildlife habitat, and other environmental improvements as we work in partnership to upgrade flood defences.”

As well as providing vital evidence about the ways the 215-mile Thames is used, and the importance of the river for local people and the millions of visitors that come to London each year, the report also features the first ever indicator for plastic pollution in the Thames. This creates a baseline for scientists to work from and monitor as the years go on.

“The Tidal Thames supports over 115 species of fish, 92 species of bird and has almost 600 hectares of saltmarsh which is a crucial habitat for a range of wildlife,” said the report. “For the nine million people living alongside it, it also provides drinking water, food, livelihoods, and protection from coastal flooding.

“Alongside technological solutions, it is well recognised that Nature-based Solutions such as habitat restoration, can also provide benefits for both biodiversity and protecting against the impacts of climate change.”