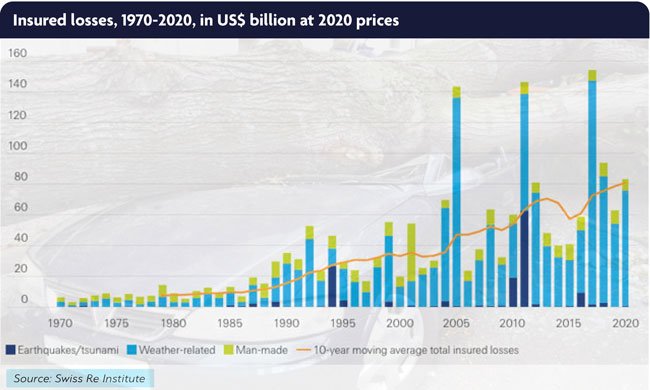 The cost to the  insurance industry from natural catastrophes and man-made disasters globally for the year has been put at $83 billion.

The Swiss Re Institute has issued its preliminary sigma estimates that put 2020 as the fifth-costliest year for the industry since 1970. The year has been defined by the growing impact of climate change on the world’s weather patterns with warnings that the severity and frequency of natural catastrophes can only increase.

Losses were driven by a record number of severe convective storms (thunderstorms with tornadoes, floods and hail) and wildfires in the US. These and other secondary peril events around the world accounted for 70% of the $76 billion insured losses from natural catastrophes.

A very active North Atlantic hurricane season triggered an additional $20 billion of insurance claims, moderate compared to the record seasons of 2005 and 2017. The insurance industry covered 45% of global economic losses in 2020, above the ten-year-average of 37%.

”As with COVID-19, climate change will be a huge test of global resilience. Neither pandemics nor climate change are ‘black swan’ events. But while COVID-19 has an expiry date, climate change does not, and failure to ‘green’ the global economic recovery now will increase costs for society in future,” He explained. ”This year’s natural disasters impacted regions with more insurance cover in place, providing vital support to the people and communities affected and enhancing their financial resilience.”

In the US, a record number of severe convective storms caused devastation throughout the year, likely leading to record annual losses in the country for this peril. Australia and Canada suffered significant losses from hail damage in 2020. In January, hailstorms in south eastern Australia caused insured losses of over USD 1 billion, while Canada experienced its costliest-ever hail event in Calgary in June, which led to losses of USD 1 billion.

Fires also contributed to secondary peril losses for insurers, said Swiss Re. Wildfires in the US from mid-August chiefly caused the high insured losses, though Australia’s 2019 fire season, the longest and most destructive ever recorded, was still burning in early 2020. In the US states of California, Oregon and Washington State, more than 800 wildfires burned close to 6 million acres, destroying thousands of structures and triggering billions in insured claims. Although less than the record losses of 2018 and 2017, 2020 will be one of the costliest for fires.

The North Atlantic hurricane season brought a record 30 named storms in 2020, including five named storms making landfall in the US state of Louisiana alone, again the highest on record. This year a uniquely conducive set of atmospheric and oceanic conditions was predicted to generate a well-above-average number of storms and landfalls. However, most US landfalls did not hit densely populated areas in 2020, resulting in relatively low insured losses of $20 billion, far lower than in the previous record hurricane seasons of 2017 (Harvey, Irma and Maria: $97 billion) and 2005 (Katrina: $87 billion).

”Large-scale climate conditions in the North Atlantic suggest elevated hurricane activity for 2021 and likely beyond. This increases the probability of a catastrophic landfall. Combined with the loss impact of secondary perils accelerated by climate change, insured catastrophe losses will only rise in the future,” said Martin Bertogg, Head of Cat Perils at Swiss Re.

Winter storms hit northern Europe in February, causing flooding, power outages and transport disruption, with more than $2 billion combined insured losses. In May, cyclone Amphan in the Bay of Bengal caused economic losses of $13 billion, the most destructive tropical cyclone India has ever experienced. Insured losses are expected to be just a fraction of the economic losses due to the region’s low insurance penetration.

A very active North Atlantic hurricane season triggered an additional $20 billion of insurance claims, moderate compared to the record seasons of 2005 and 2017. The insurance industry covered 45% of global economic losses in 2020, above the ten-year-average of 37%.