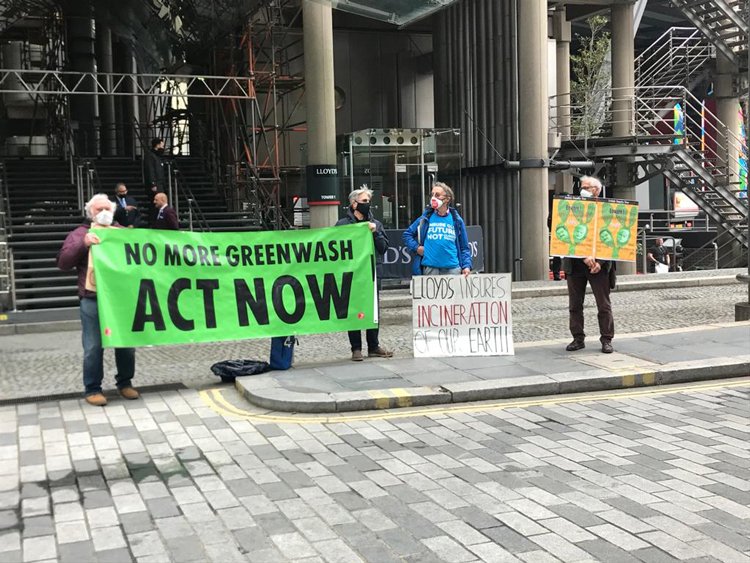 Climate protests held across UK with Lloyd’s in the crosshairs

The campaign by climate groups over the insurance of coal and fossil fuel projects saw protestors across the UK today to mark the return to offices for many.

Protestors were outside Lloyd’s in London’s Lime Street and 12 other cities to demand Lloyd’s and its insurers stop insuring all coal mines immediately. This protest was part of the first UK wide day of action to mark the reopening of Lloyd’s offices after the lockdown.

Twelve coordinated actions took place in various locations across the UK including London, Manchester, Swansea and Newcastle. The protests were supported by the Coal Action Network.

One of the projects protesters have targeted is the West Cumbria coal mine.

A Coal Action Network spokesman said they were concerned that Lloyd’s has refused to rule out insuring the project.

“If the project commences, the West Cumbria mine will be the first deep coal mine planned in the UK for over 30 years,” he added.

Coal Action Network claimed that “if it goes ahead it will help lock the steel industry into burning coal and make a mockery of the UK’s climate targets.” Whilst no insurer in Lloyd’s marketplace is currently insuring the West Cumbria coal mine, campaigners said they have so far ignored community requests to rule out insuring it and associated infrastructure all together. Today’s protests were also designed to also highlight the threat from the Adani Carmichael coal mine project in Australia. A project that many insurers across the world and inside Lloyd’s have already refused to insure.

Rebecca who attended the protest in Newcastle said: “Campaigners here in the North East understand that coal is people’s proud heritage, but not their future. Time and time again, we’ve made it clear, saying no to open casts that would wreck the local environment. Now we stand in solidarity with the calls of people in Cumbria and indigenous people in Australia and demand that Lloyd’s drop insuring coal mining, and start insuring our future instead.”

Andrew Taylor from Coal Action Network added: “Today we saw everyday people in every corner of the UK welcome Lloyd’s and its insurers back to the office with demands to stop putting profit over a liveable planet. We need them to rule out insuring deadly coal projects today, not next year or 2030.”

Coal Action Network said in a statement syndicates at Lloyd’s insure around 40% of the global energy market.

“A very large part of this is fossil fuels. Following its weak ESG policy, Lloyd’s has come under increasing pressure to immediately stop its underwriting of fossil fuel projects from local people, scientists, and climate protesters across the globe,” it added. “Last month, Insurance Rebellion protesters tipped a truck load of fake coal outside the Lloyd’s of London HQ.”

Taylor added: “Last month, Lloyd’s of London cancelled a meeting to discuss its insurance of fossil fuels. Community members from Cumbria and Australia were keen to talk to Lloyd’s about its ESG policy on coal, alongside people from the Pacific Islands whose homes are disappearing due to sea level rise. After waiting months, at the last minute Lloyd’s backed out. That’s why we’ve now decided to come to them.” 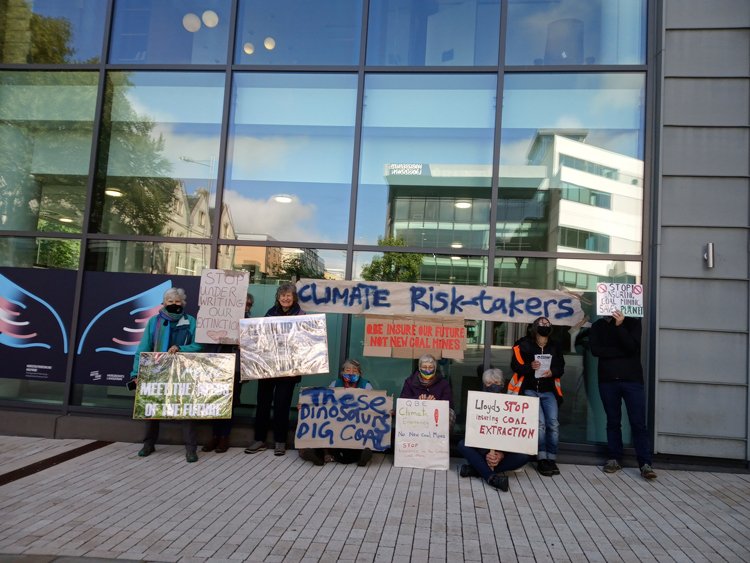 Coal Action Network claimed that “if it goes ahead it will help lock the steel industry into burning coal and make a mockery of the UK’s climate targets.” Whilst no insurer in Lloyd’s marketplace is currently insuring the West Cumbria coal mine, campaigners said they have so far ignored community requests to rule out insuring it and associated infrastructure all together.