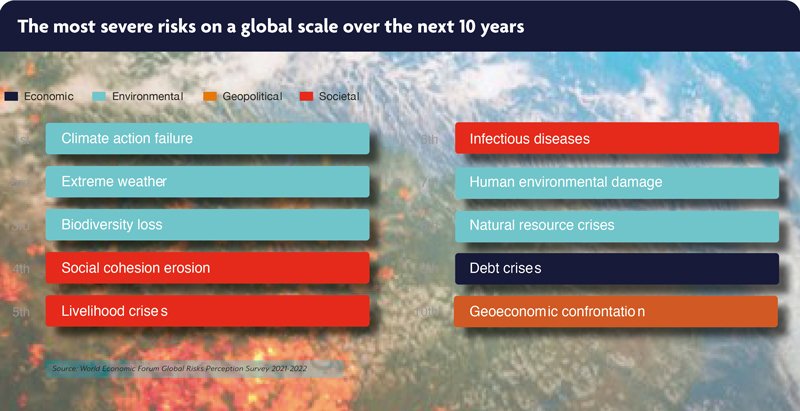 Respondents to the World Economic Forum’s Global Risks Report 2022  rank ‘climate action failure’ as the number one long-term threat to the world and the risk with potentially the most severe impacts over the next decade.

Climate change is already manifesting rapidly in the form of droughts, fires, floods, resource scarcity and species loss, among other impacts, the report says. In 2020, multiple cities around the world experienced extreme temperatures not seen for years—such as a record high of 42.7°C in Madrid and a 72-year low of -19°C in Dallas, and regions like the Arctic Circle have averaged summer temperatures 10°C higher  than in prior years.

Governments, businesses and societies are facing increasing pressure to thwart the worst consequences. Yet, it says,  a disorderly climate transition characterized by divergent trajectories worldwide and across sectors will further drive apart countries and bifurcate societies, creating barriers to cooperation, it suggests.

Given the complexities of technological, economic and societal change at this scale, and the insufficient nature of current commitments, it is likely that any transition that achieves the net zero goal by 2050 will be disorderly, the report adds, noting that while COVID-19 lockdowns saw a global dip in greenhouse gas (GHG) emissions, upward trajectories soon resumed: the GHG emission rate rose faster in 2020 than the average over the last decade.

It says that countries continuing down the path of reliance on carbon-intensive sectors risk losing competitive advantage through a higher cost of carbon, reduced resilience, failure to keep up with technological innovation and limited leverage in trade agreements. Yet shifting away from carbon-intense industries, which currently employ millions of workers, will trigger economic volatility, deepen unemployment and increase societal and geopolitical tensions.

According to the report, adopting hasty environmental policies will also have unintended consequences for nature—there are still many unknown risks from deploying untested biotechnical and geoengineering technologies—while lack of public support for land use transitions or new pricing schemes will create political complications that further slow action. A transition that fails to account for societal implications will exacerbate inequalities within and between countries, heightening geopolitical frictions.

Peter Giger, Group CRO, Zurich Insurance Group, says: “The climate crisis remains the biggest long-term threat facing humanity. Failure to act on climate change could shrink global GDP by one-sixth and the commitments taken at COP26 are still not enough to achieve the 1.5 C goal. It is not too late for governments and businesses to act on the risks they face and to drive an innovative, determined and inclusive transition that protects economies and people.”

The report also focuses on the growing dependency on digital systems—intensified by COVID-19—which it says has altered societies:

“Over the last 18 months, industries have undergone rapid digitalization, workers have shifted to remote working where possible, and platforms and devices facilitating this change have proliferated. At the same time, cybersecurity threats are growing—in 2020, malware and ransomware attacks increased by 358% and 435% respectively—and are outpacing societies’ ability to effectively prevent or respond to them. Lower barriers to entry for cyberthreat actors, more aggressive attack methods, a dearth of cybersecurity professionals and patchwork governance mechanisms are all aggravating the risk.”

Attacks on large and strategic systems will carry cascading physical consequences across societies, while prevention will inevitably entail higher costs, it suggest, while intangible risks—such as disinformation, fraud and lack of digital safety—will also impact public trust in digital systems:

“Greater cyberthreats will also hamper cooperation between states if governments continue to follow unilateral paths to control risks. As attacks become more severe and broadly impactful, already- sharp tensions between governments impacted by cybercrime and governments complicit in their commission will rise as cybersecurity becomes another wedge for divergence—rather than cooperation—among nation-states.”

“With cyber threats now growing faster than our ability to eradicate them permanently, it is clear that neither resilience nor governance are possible without credible and sophisticated cyber risk management plans.”

Growing insecurity resulting from economic hardship, intensifying impacts of climate change and political instability are already forcing millions to leave their homes in search of a better future abroad,  the report notes, saying that ‘involuntary migration’ is a top long-term concern for respondents to its The Global Risks Perception Survey (GRPS), while 60% of them see ‘migration and refugees’ as an area where international mitigation efforts have ‘not started’ or are in ‘early development’.

Indeed, it points out, in 2020, there were over 34 million people displaced abroad globally from conflict alone—a historical high. However, in many countries, the lingering effects of the pandemic, increased economic protectionism and new labour market dynamics are resulting in higher barriers to entry for migrants who might seek opportunity or refuge.

The WEF suggests that these higher barriers to migration, and their spill- over effect on remittances—a critical lifeline for some developing countries—risk precluding a potential pathway to restoring livelihoods, maintaining political stability and closing income and labour gaps:

“At the time of writing, the United States faced over11 million unfilled jobs in general and the European Union had a deficit of 400,000 drivers just in the trucking industry. In the most extreme cases, humanitarian crises will worsen since vulnerable groups have no choice but to embark on more dangerous journeys. Migration pressures will also exacerbate international tensions as it is increasingly used as a geopolitical instrument. Destination- country governments will have to manage diplomatic relationships and immigrant scepticism among their populations.”

The Global Risks Report 2022 has been developed with the support of the World Economic Forum’s Global Risks Advisory Board. It also benefits from ongoing collaboration with its strategic partners, Marsh McLennan, SK Group and Zurich Insurance Group, and its academic advisers at the Oxford Martin School (University of Oxford), the National University of Singapore and the Wharton Risk Management and Decision Processes Center (University of Pennsylvania). 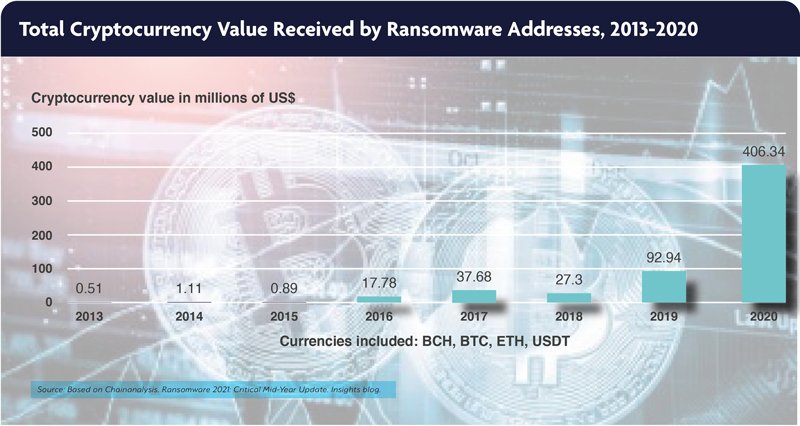 Cybersecurity threats are growing—in 2020, malware and ransomware attacks increased by 358% and 435% respectively—and are outpacing societies’ ability to effectively prevent or respond to them. 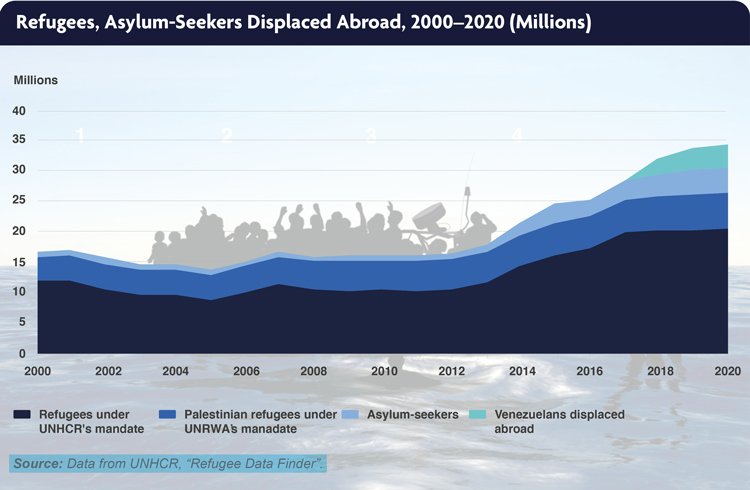