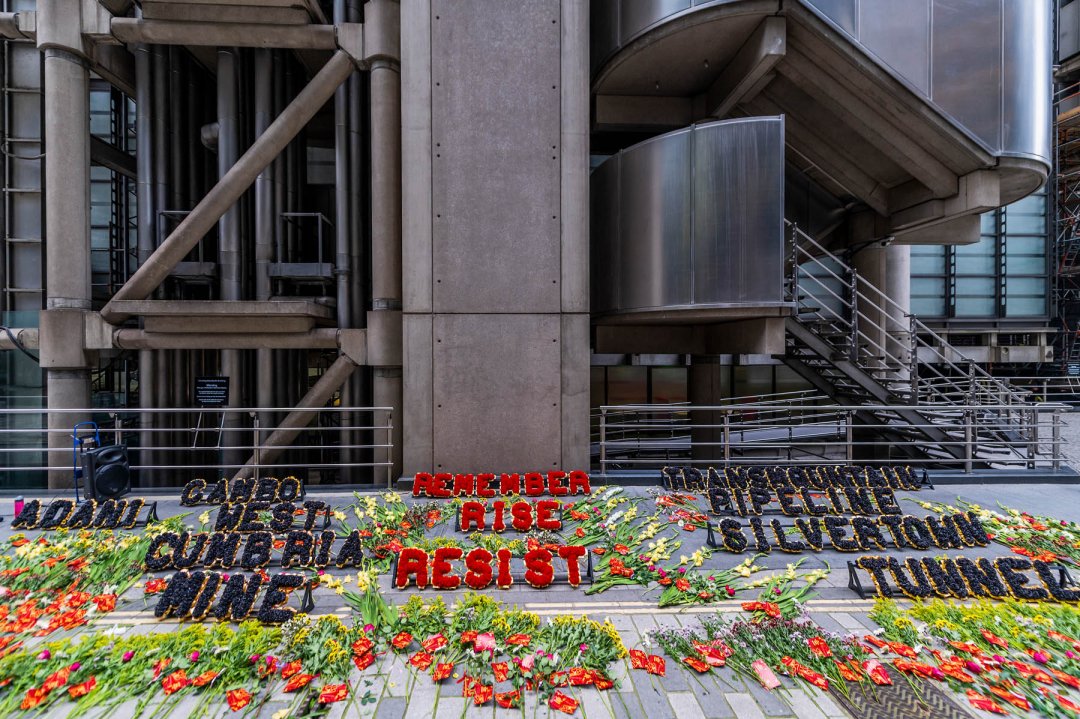 Lloyd’s has once again been in the crosshairs of climate activists amid a protest outside its headquarters and reports that syndicates may be considering engagement in a mutual to cover coal risks which had been shunned by other underwriters.

On Friday protesters from Coal Action Network set up a climate justice memorial in Lime Street. Activists said the climate memorial was set up to remember communities on the front lines of climate breakdown who are directly impacted by harmful projects and climate impacts.

The memorial involved hundreds of flowers and floral wreaths, following the visual theme of Remember – Rise – Resist. Testaments from communities on the front lines of fossil fuel projects and climate impacts were read out and delivered to staff in the building.

Elara from Coal Action Network said “Through the memorial we will bring to life the memories of every person harmed by the injustices of the climate crisis. We’ve laid wreaths naming climate wrecking projects we want Lloyd’s to rule out underwriting today and help to prevent billions of lives being destroyed by climate impacts.”

Flowers with over 600 individual messages from people across the UK were handed out to staff going in and out of the Lloyd’s building. Staff were asked to speak to senior management in Lloyd’s about ruling out insuring all fossil fuels, as well as, various fossil fuel projects including the Adani Coal mine, tar sands TransMountain pipeline, West Cumbria coal mine, and the Cambo oilfields. The group also called for Lloyd’s to pay compensation for climate impacts.

It comes as it was revealed Swiss Re and Munich Re have ruled out support for a controversial mutual fund proposed for the Australian coal industry. The two have responded to letters from the Insure our Future campaign ruling out their participation. The reinsurers said their climate and coal policies would rule out their involvement in the scheme.

The coal industry mutual fund had been suggested as a potential solution to the insurance challenges faced by the Australian coal industry, after insurers increasingly refuse coverage because of concerns about global warming and climate risk.

The National Party is now demanding the Australian government establish a $250 billion fund to lend public money to mining companies to finance and insure coal projects that the private sector is unwilling to support. The proposed loan facility could support the creation of a coal industry mutual fund.

The commitments from reinsurers not to support the proposed mutual fund come as an insurance policy for the Adani Carmichael coal mine expired last week.

Pablo Brait, campaigner with Market Forces said: “Australia is the second largest coal exporter in the world, so it’s not surprising that reinsurance companies like Munich Re and Swiss Re are distancing themselves from a mutual fund that could insure the entire Australian coal industry. The fund would support the development of massive new coal mines at a time when science is telling us that coal has to stay in the ground if we are to hit the goals of the Paris Climate Agreement.”

Lindsay Keenan, European Coordinator of the Insure Our Future network however called on Lloyd’s to take a stand against any syndicate participation.

“Despite 32 of its syndicates publicly ruling out involvement in the Adani Carmichael coal mine, Lloyd’s has so far refused to make a market-wide commitment and so allows other Lloyd’s syndicates to continue to insure Adani,” he said. “However, even Lloyd’s has clearly stated that the coal mutual proposal would go against its coal policies due to come into force next year.”

Flowers with over 600 individual messages from people across the UK were handed out to staff going in and out of the Lloyd’s building. Staff were asked to speak to senior management in Lloyd’s about ruling out insuring all fossil fuels, as well as, various fossil fuel projects including the Adani Coal mine, tar sands TransMountain pipeline, West Cumbria coal mine, and the Cambo oilfields. The group also called for Lloyd’s to pay compensation for climate impacts.

www.parliament.uk Sharma calls on world to deliver
Scroll to top