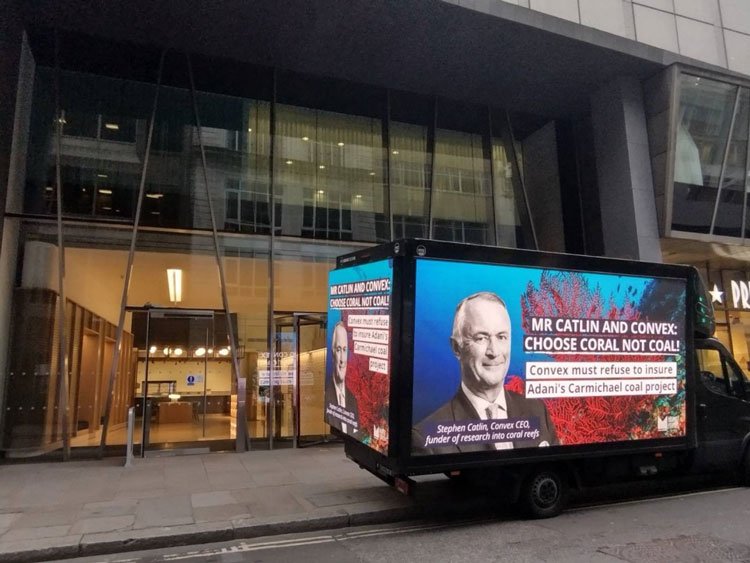 The ongoing row between climate campaigners and a leading London market insurer intensified yesterday when a protest was held outside the London Market Conference.

Delegates were greeted with a mobile advertising board on which environmental organisation Market Forces continued their campaign against Convex Insurance, over its refusal to rule out cover for the controversial Adani Carmichael coal project.

Market Forces said the underwriter has not ruled out the project despite over 40 other major insurers having done so.

The two organisations are already in dispute over a satirical recruitment video.

Earlier this month, Market Forces published the video exposing Convex’s “willingness to insure coal projects like Carmichael”. The video faced backlash from the company and led to Convex engaging lawyers to successfully remove the video from YouTube, Twitter and LinkedIn Activists played the video on the 4x2m screen ad van as attendees arrived for the conference held in Houndsditch. Activists also gave out briefings to attendees about the egregious impacts that the coal mine, rail line, and export terminal would have if it goes ahead.

The Adani Carmichael coal mine in Australia has been surrounded in controversy. Environmentalists describe it as “one of the most environmentally and socially destructive projects on Earth”. They add it will emit 4.6 billion tonnes of CO2 – equivalent to more than eight years of Australia’s annual greenhouse gas emissions – and unleash proposals for even larger mines in the Galilee Basin. If all these mines go ahead, the Galilee Basin alone could produce over 5% of global carbon emissions by 2030. The scale of the mine is so vast that it puts global climate targets in danger.

In late 2019, after being denied insurance by mainstream insurance companies, Adani was able to secure coverage for the Carmichael coal project via insurers at Lloyd’s. However, while Adani Carmichael has managed to obtain sufficient insurance so far, its options in the Lloyd’s marketplace are rapidly shrinking, with five of Adani’s current insurers – the latest being Ascot – now publicly refusing to renew their insurance policies associated with the project.

So far, 106 companies have ruled out underwriting the project, including 42 major insurance companies. However, Convex is has not made any public statement in its approach to the project.

Mia Watanabe, UK Campaigner for Market Forces, said: “Convex is trying to censor a video about their involvement in financing dirty coal projects, so we’ve brought the video to their doorstep to show them that they have nowhere to hide.

“The recent end of the COP26 climate summit in Glasgow – where countries agreed to ‘phase down’ coal power – and the International Energy Agency’s Net Zero report showing the need for ‘huge declines’ in the use of coal, shows that no climate-conscious insurance company can underwrite new coal projects. With over 40 major insurers ruling out underwriting the Carmichael project so far, all eyes are now on Convex to cut ties with Adani.”

In late 2019, after being denied insurance by mainstream insurance companies, Adani was able to secure coverage for the Carmichael coal project via insurers at Lloyd’s. However, while Adani Carmichael has managed to obtain sufficient insurance so far, its options in the Lloyd’s marketplace are rapidly shrinking, with five of Adani’s current insurers – the latest being Ascot – now publicly refusing to renew their insurance policies associated with the project.