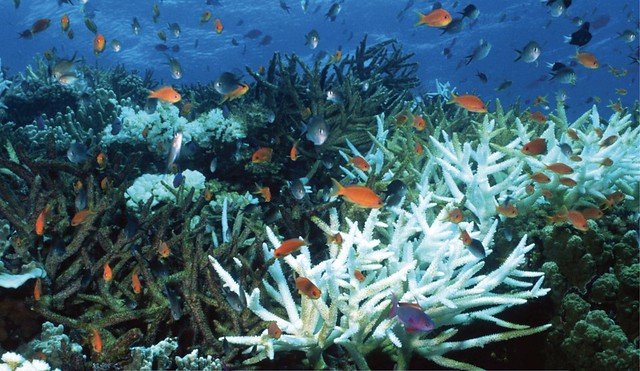 The world’s coral reefs and the 1 billion lives they support are in greater danger than ever before as climate change continues to destroy ever greater areas.

A new report by United Nations Environment Programme (UNEP) warns that the bleaching of the world’s coral reefs will only increase unless global climate change is effectively tackled.

In 2014, coral reefs around the world turned a pallid white from heat stress. The bleaching began in the Pacific and rapidly spread across the Indian and Atlantic oceans. The so-called Third Global Bleaching Event lasted for 36 months, marking the longest, most pervasive and destructive coral bleaching incident ever recorded.

Though over now, the report warned the world’s reefs remain in hot water, and with it the lives of the 1 billion people who rely on the reefs for their livelihoods and food scources.

The report added worldwide mass bleaching events, like the one that began in 2014, could become the norm in the coming decades. The report’s updated climate models found that coral bleaching is happening faster than anticipated and the future health of the world’s reefs is inextricably tied to reducing greenhouse gas emissions. Time is of the essence for marine species, human livelihoods and the still unknown treasures in our vastly unexplored oceans, the report added.

“The sad part is that the projections are even more dire than before,” says the report’s lead author, Ruben van Hooidonk, a coral researcher with America’s National Oceanic and Atmospheric Administration’s Cooperative Institute for Marine and Atmospheric Studies. “It means we really need to try to reduce our carbon emissions to save these reefs. This report shows that we need to do it even more urgently and take more action because it’s even worse than what we thought.”

The new report, Projections of Future Coral Bleaching Conditions Using IPCC CMIP6 Models, examined bleaching based on two possible scenarios. The first looks at a world economy heavily driven by fossil fuels. The second explores a “middle-of-the-road” option whereby countries exceed their current pledges to limit carbon emissions by 50 per cent. (This would still lead to more than 2°C warming by century’s end.)

Under the fossil-fuel-heavy scenario, the report estimated that every one of the world’s reefs will bleach by the end of the century with annual severe bleaching occurring on average by 2034, nine years ahead of predictions published three years ago. Should countries achieve the middle-of-the-road scenario, severe bleaching gets delayed by eleven years, to 2045.

“In the face of inaction, coral reefs will soon disappear,” said Leticia Carvalho, Head of the Marine and Freshwater Branch at the UNEP. “Humanity must act with evidence-based urgency, ambition and innovation to change the trajectory for this ecosystem, which is the canary in the coalmine for climate’s impact on oceans, before it’s too late.”

High ocean temperatures are one of the primary triggers of coral bleaching. When waters get too warm, corals release their algal energy source and turn white. Corals can recover from bleaching if conditions improve. However, progressive warming events may weaken reefs beyond repair.

There have been three major global bleaching events since 1998, including the one in 2014. If those become an annual occurrence, the report says it would mark the point of no return for reefs, compromising their ability to supply a range of ecosystem services, including food, coastal protection, medicines and recreation opportunities. Crucially, reefs support about 25 percent of all marine species upon which at least 1 billion people depend.

Some reefs are expected to be what the report dubs “climate losers” by experiencing severe bleaching events before 2030. Widespread bleaching is already familiar to many territories, including Fiji, New Caledonia, Saudi Arabia, Papua New Guinea and eastern Australia. Other places, such as Indonesia, western Australia, the Bahamas, Madagascar, India and Malaysia, contain pockets of corals only expected to bleach after 2044. Reefs demonstrating this type of lower climate vulnerability could serve as “temporary refugia”, said the report.

“These are the spots where corals will survive the longest and where we should focus conservation and restoration efforts,” added Mr van Hooidonk.

Fears grow for financial wellbeing across the world
Scroll to top