The Covid-19 pandemic has accelerated the adoption of technology for many who had perhaps resisted up until now, especially the over 65s, according to financial services review platform Smart Money People.

Social distancing measures, reduced branch opening hours and lockdowns since March 2020 have all made a significant impact to remote banking as well as customers’ preferred channels, be they online banking or mobile apps.

“Cash is out, digital is in,” said Jacqueline Dewey, CEO of Smart Money People, which claims to be the UK’s largest financial services review website and insight business.

“The big question is whether the High Street banks see this as an open invitation to close more branches and ATMs, which are shutting at a faster rate than pubs and petrol stations in many small and rural towns. HSBC have recently announced plans to close another 82 branches, claiming that only 10 per cent of its customer contact is now happening face to face.

“These may prove to be irreversible changes. If so, there must be pressure on the banks to do even more to protect their customers from the increasing number of financial scams. They must use savings to further strengthen their online and mobile systems to protect the vulnerable and those less confident with being online.”

Data collected by the company found those aged over 65 using banking apps and online banking grew by 3.5% last year compared to 2019, and now stands as 70.9%, but there was little to no change across all other age groups.

The share of over 65s preferring to deal with their banks via branch fell by 5.4% to just 18.2%, meaning that apps overtook branch as a preferred channel for this age group in 2020.

The survey of nearly bank 32,000 customers found that banking apps took a commanding lead in 2019 as the nation’s preferred channel and this held steady in 2020. The findings also show that overall customer preference for digital channels (banking apps and online banking combined) remained consistent with 2019.

“It’s clear that the pandemic has accelerated the adoption of technology for many who had perhaps resisted up until now, especially the over 65s,” Dewey added. “We believe social distancing measures, reduced branch opening hours, and the lockdowns of 2020 have all contributed to this.”

As expected, Gen Z, those aged 18-24, continue to be the biggest advocates of mobile apps to satisfy their banking needs, with 57.6% preferring apps over other channels. However, growth in mobile app preference slowed when compared to 2019 across all other age groups except for the over 65s.

Smart Money People’s data shows customers aged 18-34 are the biggest fans of telephone banking, indicating that whilst mobile apps are popular with younger customers, who are typically less financially experienced, they still value being able to speak to their banks. 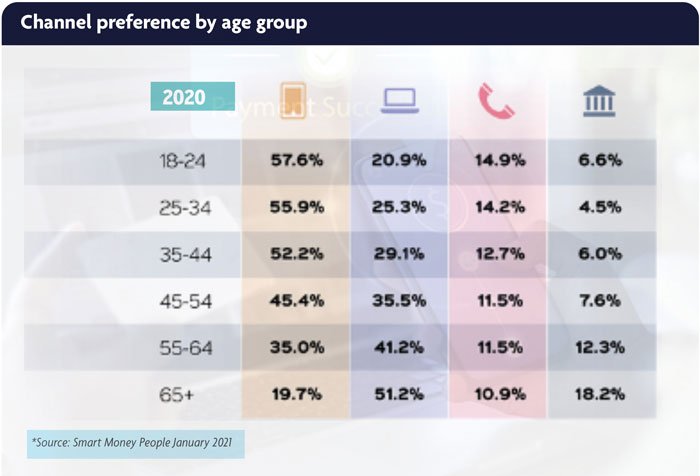