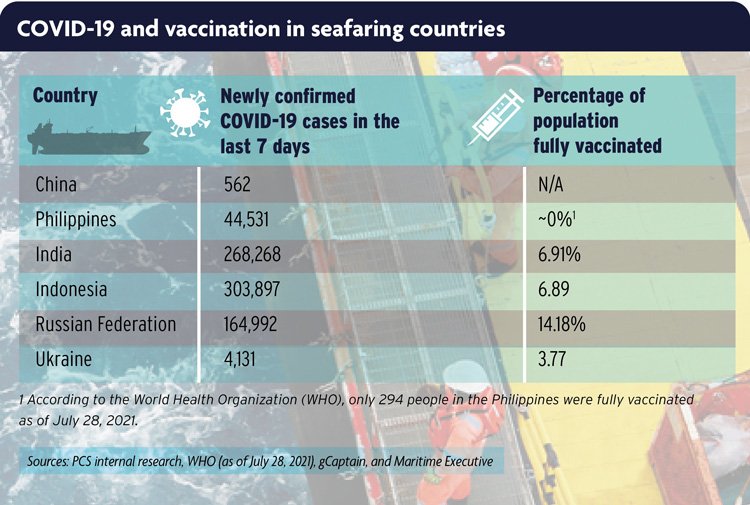 COVID-19 once again poses an intensifying threat to supply chain resilience, according to this latest analysis from PCS.

Marine (re)insurers, in particular, should stay vigilant as to the potential implications for the risk environment. Low rates of vaccination, the continued problem of crews stranded at sea past the ends of their assignments, and port accumulations due to pandemic-affected workforces are among the factors that could lead to changes in potential insured loss results from both manmade and natural events. Underlying the entire issue is the increased rate of COVID-19 infections in the countries that supply most of the world’s seafarers.

Increased COVID-19 infection rates have re-emerged as a problem for the marine sector. Although still lower than the levels seen a year ago, high rates of infection from the Delta variant and low levels of vaccination in key countries could result in worldwide crew shortages, fatigued and stranded crewmembers, and increased risk of loss for marine (re)insurers. The concentration risk associated with the seafaring population means that an uptick in symptomatic infection or fatality rates could have profound ramifications for the shipping industry and the supply chain as a whole.

Only a handful of countries produce most of the world’s seafarers. According to the International Chamber of Shipping (ICS), most come from the Philippines, followed by China, Indonesia, the Russian Federation, and Ukraine. Of the total population of 1.65 million seafarers, 774,000 are officers and 873,500 are ratings. According to gCaptain, only around 20 percent of seafarers have been vaccinated. This may significantly exceed vaccination rates in seafarers’ countries of origin, but it remains quite low relative to developed market regional targets of generally around 67 percent. This issue associated with this disparity is further exacerbated when considering that unvaccinated crew members work in close conditions for long periods of time.

When viewed from the perspective of the global supply chain, it’s clear that states with demand for end goods (using the G7 as a proxy for net import/consumption, as part of a broad, but effective, oversimplification in this example) have far higher vaccination rates than the countries providing most of the labour for shipping those goods. What results from this imbalance is a clear threat to the flow of goods/ consumption behaviour in developed markets, and overall global economic health.

Direct supply chain risks from COVID-19 today may not seem as severe as they were a little over a year ago, but there’s sufficient foundation for concern. Last year, in one of PCS’s information-only bulletins on COVID-19, we noted the significant threat COVID-19 posed to the maritime community and the supply chain as a whole. At one point, there were as many as 1.2 million seafarers out at sea, comprising 75 percent of the total population. As many as 200,000 were stranded during the pandemic’s worst effects on the maritime industry. The number of crew stranded past their terms currently stands at half that, but it could increase if we’re still early in the Delta variant’s transmission cycle.

The situation could worsen if case counts continue to increase in seafarers’ home countries, implying a further threat to the pool of available officers and ratings. And that exacerbates existing staffing challenges. The team at VesselTracker, also part of Verisk, notes from contacts worldwide a fear among crew that if you sign up for a one-month term, you could wind up doing a year if the vessel gets quarantined or are forced to remain at sea if a port is shut down (preventing the vessel from gaining access). Even if crew can be found, the time and cost associated with getting them to a particular vessel has increased, along with several risks that impact the ability to arrive at all.

The economic implications of crew shortages are already being felt by businesses and end consumers, from increased shipping costs to higher price tags for goods on shelves. Some of this simply comes down to the cost of crew, which can be pushed higher by increased day rates and starting bonuses. For the global (re)insurance industry, though, the risks associated with crew being hired in such an environment can be far more significant.

The salient imbalance between crew availability and demand would generally be enough for (re)insurers to note an increased risk environment. A shortage of qualified crew could result in the sorts of situations we’ve seen throughout the pandemic (eg, stranded beyond one’s term). Fatigue, eroded morale, and a general sense of the unknown could increase the risk of non-elemental loss events. (Re)insurers have remained alert to these and related issues in the marine market throughout the pandemic. With low vaccination rates in key countries and increased virus transmission (particularly with the Delta variant), the normal risks associated with crew shortages and suboptimal replacement could spike with little notice. In fact, the imbalances we’re seeing today should serve as the early warning one would hope for. 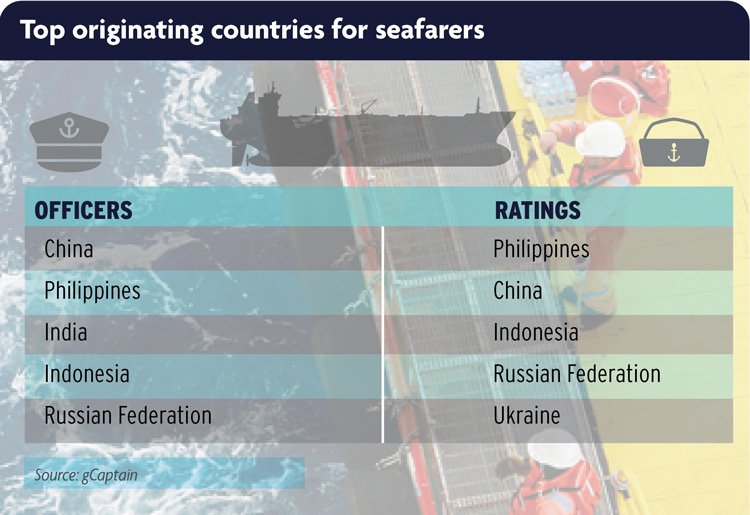 Only a handful of countries produce most of the world’s seafarers. According to the International Chamber of Shipping (ICS), most come from the Philippines, followed by China, Indonesia, the Russian Federation, and Ukraine. Of the total population of 1.65 million seafarers, 774,000 are officers and 873,500 are ratings.