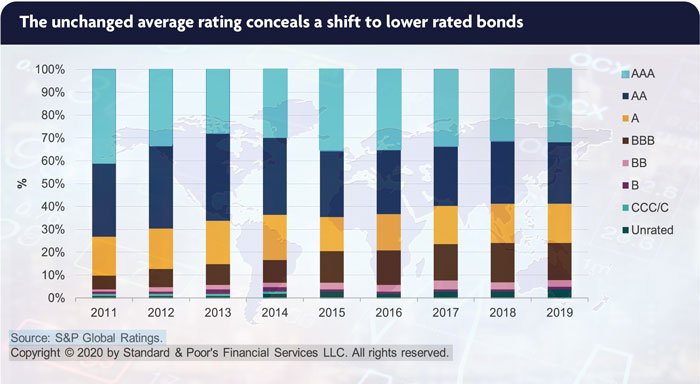 Credit risk is on the rise says S&P

Reinsurers have become increasing willing to invest in speculative-grade bonds over the past decade, according to an analysis by rating agency Standard & Poor’s (S&P).

According to S&P, the average rating in the fixed-income portfolios held by the top 20 reinsurers has not changed over the past decade- it still in the ‘AA’ category. However, in 2011, more than 40% of the bonds held were rated ‘AAA’; by year-end 2019, this share had dropped to 31%.

S&P attributes the shift to a number of downgrades, notably of sovereign issuers, that occurred during the period, combined with the gradual shift in the portfolios toward corporate bonds. Over the same period, the share of bonds rated in the ‘BBB’ category spiked to 16% from 6%.

Excluding these movements, bonds rated in the ‘A’ or ‘AA’ category have remained broadly unchanged.

Overall, the rating agency suggested, reinsurers still aim to invest almost all their cash flows in fixed-income securities rated investment-grade. However, it noted, they have become increasingly willing to invest in speculative-grade bonds:

“Indeed, the share of speculative-grade and unrated bonds has doubled over the past decade and now represents 8% of the average bond portfolio. That said, reinsurers have shown prudence; most of the speculative-grade bonds they invest in are rated in the ‘BB’ category, the highest level within the speculative-grade space. They have not deployed more-risky strategies, such as buying instruments issued by ailing companies and hoping for recovery or favourable liquidation.”

Once again, S&P added, risk appetites for investing in speculative-grade bonds demonstrate material differences across the top 20 reinsurers: Group 1 players invested less, at just 6% of total fixed income portfolio at end-2019, while reinsurers in Groups 2 and 3 have been more aggressive. Some have invested as much as 18% of their bond portfolios in speculative-grade instruments, albeit mostly in the ‘BB’ category.

According to S&P, these trends clearly illustrate that the sector has had to adapt to the persistently low interest rates and the challenge of controlling tariffs amid intense competition and frequent natural catastrophe claims. Both investment and underwriting have suffered, and reinsurers have sought additional profitability elsewhere. They found it in revising their investment guidelines and increasing their tolerance for credit risk. That said, S&P suggested, the shift has been fairly gradual and has been managed in a controlled way.

On the investment side of the fence, yields achieved a soft landing, but “probably won’t take off again for some time” the agency said:

“Over the past decade, average yield in reinsurers’ investment portfolio has fallen to an estimated 2.4% average in 2020 from 3% or more before 2010. This dilution is in line with the general fall in interest rates affecting every major currency that reinsurers invest in.

“Oddly, performance in recent years has shown that yield dilution has become less significant. We consider that this stems from the relatively short duration of the reinsurers’ bond portfolios. The old instruments that generated higher yields were mostly repaid during the first part of the decade. They have therefore contributed little to portfolio yields since 2015.”

If reinsurers had not changed the credit quality of their fixed-income portfolios, the downward trend could have continued, S&P said, suggesting that the actions they took in shifting toward riskier assets instead helped to sustain investment returns:

“In our view, the change in policy formed the basis of the broadly stable trend we have observed over the past three-to-five years.”