The rise of the Internet of Things (IoT) is now posing a clear and present danger of cyber-attack on major industrial and manufacturing firms across the globe.

Lloyd’s has published a new report in conjunction with cyber analytics specialist CyberCube and reinsurance broker Guy Carpenter, which examines how ‘Internet of Things’ devices are posing an increasingly high risk of cyber-attack to industrial and manufacturing businesses.

The report warns Cyber-attack risks have previously been considered unlikely to materially impact the physical market, with cyber perils traditionally emerging in the form of non-physical losses. However, the report looks at how physical risks have become a rapidly growing concern for industrial businesses as shown by recent high-profile breaches.

As bridges are increasingly being built between information technology (IT) and operational technology (OT), along with increases in automation and sophistication of threat actors, it is paramount that (re)insurers carefully consider where major losses may occur, it adds.

Kirsten Mitchell-Wallace, Lloyd’s Head of Portfolio Risk Management, said: “The Lloyd’s market is advanced when it comes to insuring cyber risks and it is therefore vital Lloyd’s syndicates underwriting this class of business have the ability to analyse their portfolios against the most sophisticated and technologically advanced risk scenarios. We know that the risk of ICS-based cyber-physical events is increasing and because of this, we’ve partnered with CyberCube and Guy Carpenter to create illustrative scenario pathways based on highly realistic threats and modes of attack.”

The report’s analysis examines three scenarios which represent the most plausible routes by which a cyber-attack against industrial control systems (ICS) could generate major insured losses. It also considers four key industries dependent upon ICS (manufacturing, shipping, Energy, and Transportation) and assesses precedent and potential impact on each.

Jamie Pocock, Guy Carpenter’s Head of GC Cyber Analytics – International said: “A major ICS attack could impact a broad range of industrial businesses and classes of insurance. As these attacks cross the divide between information technology and operational technology, they could conceivably involve significant property damage and loss of human life. The key is continued research, surveillance, and risk selection to help improve underwriting standards and portfolio management.”

The  research highlights a range of issues for insurers and their clients.

“We recommend continued research and focus on developing and improving exposure management and underwriting standards in an emerging area of cyber risk whose boundaries are yet to be defined,” warns the report. “Furthermore, we recommend continued diligence around the increasing aggregation potential that could transition the groundwork laid for a threat specific to individual portfolios to one that may aggregate across the market.

“The insurance market has a rich legacy of adapting to emerging risks and changing trends. As the risk of cyber-physical losses grows, it is essential that the market develops products and expertise to service this.”

Pascal Millaire, CyberCube’s CEO, said: “The potential for a major ICS attack is all too real today given several real-world examples of such attacks. As we roll out hundreds of billions of additional IoT devices, it will become even more important in the future and could eventually become a systemic risk for the global economy.”

The report concludes with a range of “strong” recommendations for the (re)insurance market to consider.

As bridges are increasingly being built between information technology (IT) and operational technology (OT), along with increases in automation and sophistication of threat actors, it is paramount that (re)insurers carefully consider where major losses may occur. 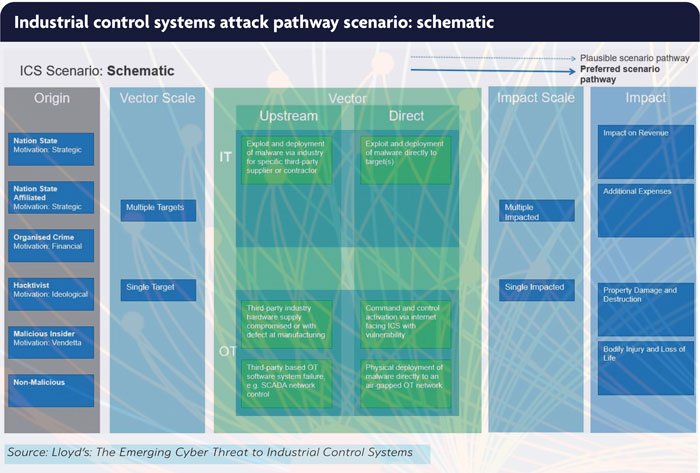