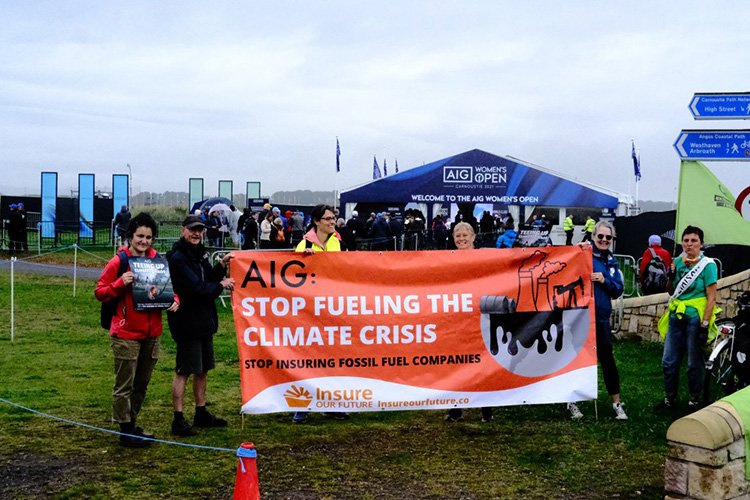 Climate protestors took their grievances to one of the UK’s oldest golf courses as they picketed the penultimate round of the Women’s British Open, sponsored by US insurance giant AIG.

The protesters were outside the gates of the Carnoustie golf course in Scotland on Saturday to highlight what they say is AIG’s poor record around the continued insurance of fossil fuel firms and risks.

AIG are the major sponsor of the tournament which is one of the Women’s “Majors” attracting thousands of fans and millions of television spectators across the world.

Demonstrators raised a banner at the entrance to the tournament, calling on AIG to “Stop Fuelling the Climate Crisis” and “Stop Insuring Fossil Fuel Companies”. The group also put up posters around the town of Carnoustie condemning AIG for “Teeing up climate chaos”.

“Insurers often escape the spotlight on climate, but AIG and its peers make oil, gas, and coal production possible,” said Hannah Saggau, Climate Campaign Coordinator with U.S. consumer group Public Citizen. . “Fossil fuel companies could not keep destroying our planet if no one insured their risky operations. AIG has known about the damaging impacts of the climate crisis for many years and still insures the dirtiest of fossil fuels,” says Chiara Arena, one of the demonstrators and a researcher on climate and insurance.

“AIG has been under fire for years for enabling the fossil fuel companies driving climate change. The company is one of the world’s top three insurers of oil and gas and one of the few major global property and casualty insurers that still insures coal with no restrictions. As a result of AIG’s continued underwriting of coal and failure to disclose the amount of emissions its finances, the UK’s largest asset manager, Legal & General, dropped its holdings in AIG in June.

“AIG is enabling climate chaos by underwriting and investing in the fossil fuel industry. Given the dire warnings in the UN’s newest Climate Report, people and the planet absolutely cannot afford AIG’s unabated support for fossil fuels.”

In June of this year, AIG reaffirmed its policy to insure and invest in fossil fuels when it released its first ever “Environmental, Social, Governance Report”, a move that was condemned by climate groups in the wake of other insurance groups issuing pledges to cease the coverage of fossil fuel risks.