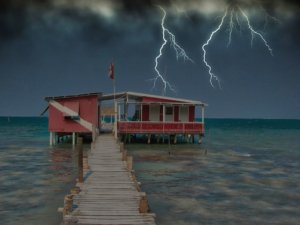 The devastation caused by Hurricane Dorian is set to severely impact the Bahama’s tourist trade for years to come a leading loss adjuster has warned.

Ken Tolson, President US Claims Solutions at Crawford told Emerg-in.co.uk the company already had over 20 staff in the beleaguered islands with preparations for another 20 to head out later this week.

“Great Abaco, Grand Bahama and Marsh Harbour have been very badly damaged,” he said. “Normally hurricanes will travel at between 10-15 miles per hour but Dorian sat on the islands for 36 hours.

“In a case like this what the wind does not knock over immediately it will wear down.”

He added that the storm severity was such that the vast majority of buildings have been severely damaged.

Mr Tolson added: “We have been able to get 21 staff into Nassau which did not suffer the level of damage we have seen in some of the other islands and while there has been some loss of power the cell service remains operational.

“The issue is the logistics of getting our staff onto Abaco and the worst hit islands and areas as access is difficult.”

The storm left over 40 dead, thousands missing and it is likely the death toll will rise.

Dorian missed much of Florida and winds and rain impacted coastal areas of Georgia and the Carolinas.

“We are seeing some claims from Florida and at present we have seen power loss for 100,000 properties notified by Duke Energy and there is likely to be more as the storm progresses north along the eastern seaboard.

“In terms of the US mainland we have a target to ensure 90% of all claimes are closed in 90 days and we are working to that target.”

However Mr Tolson said the Bahamas would be a very different story.

“The Bahamas relies heavily on its tourism and we have seen significant amounts of it tourist accommodation damaged on the islands.

“The fact they are islands also adds to the issues with the recovery process because things need to be shipped  and the delivery times can be uncertain.”

He said it is estimated that Puerto Rico would take 18 months to recover from the damage caused in last year’s hurricane season but the Bahama is in a more critical state.

“I think if we are speaking in two years’ time we will still be working on the claims arising from the Bahamas,” he added. “This will be s long process and the level of damage is such that many structures will simply need to be bulldozed to the ground and rebuilt.”