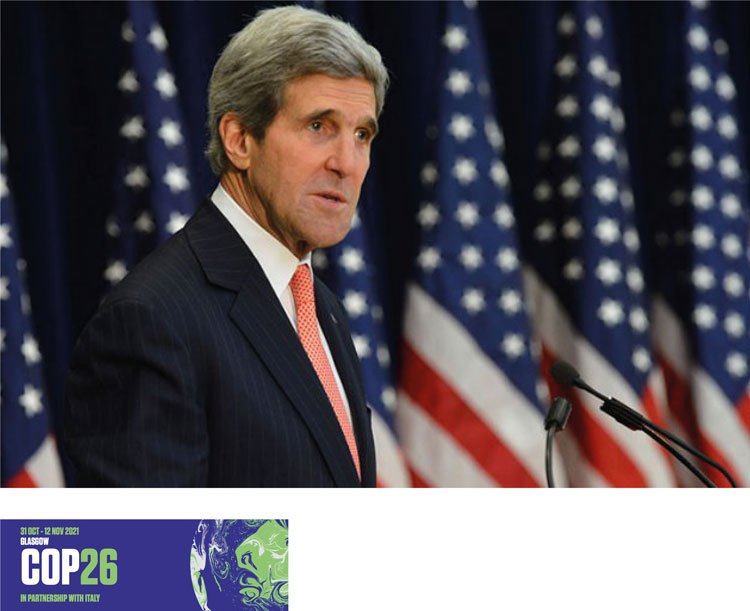 Down but not out as coal dominates COP26 agreement

COP26 finished with an agreement but also in controversy after India demanded the wording on the future of coal should be diluted.

As delegates hailed the agreement, US Special Envoy on Climate Change, John Kerry, (above) warned that the private sector would be expected to play its part in funding the huge financial burden the move to net zero will incur.

The Glasgow Climate Pact was signed after the event stretched into a further day but plans to include a pledge to “phase out” coal was watered down to “phase down” the use of coal after intervention from the Indian delegation. However, for the first time in the 26 meetings of the COP the agreement specifically includes clauses around oil gas and coal usage.

Alok Sharma COP26 president warned agreement had been reached but it was far from a reason to celebrate.

“I would say, however, that this is a fragile win,” he said “We have kept 1.5 alive. That was our overarching objective when we set off on this journey two years ago.”

He added: “What this will be judged on, is not just the fact that countries have signed up, but on whether they meet and deliver on the commitments.”

In the raft of speeches follow the agreement Kerry warned the financial costs of the plan would need to be met.

Under the agreement the world’s richest nations have pledged to enhance support for developing economies with the costs of transition to net zero.

The agreement has met with a mixed reaction from activists and experts.

Bill Hare, CEO, Climate Analytics said: “Glasgow was the first really big test for the Paris Agreement. Countries were asked to come forward every five years to raise ambition towards the level needed to limit warming to 1.5°C.

“COP26 has reinforced the political commitment to limiting warming to 1.5°C. However, if countries don’t increase their ambition and take more action in the next few years, we are endangering this goal.

“Glasgow has not closed the emissions gap in 2030, which is vital to keeping 1.5° alive, but it has set up an urgent process to address this gap, inviting countries to submit more ambitious national climate targets by the end of 2022. It also sets out a plan for continuous pressure on closing the gap to keep 1.5° in sight – establishing annual ministerial roundtables on ambition, and annual reports for tracking where we’re heading.

“There is a sense of urgency with the accelerated timeline for action. There is consensus that this is a critical decade for accelerated action. It is a race against time.”

However he warned: “If countries do not step up substantially in the next year or two, by taking action like phasing out coal, addressing the role of gas, then the future picture is really bleak. We would be locking in warming of well over 2°C, and as high as 2.7°C, which would be really catastrophic for many countries.”

“India’s last minute change to the language to phase down but not phase out coal is quite shocking,” said Hare.

“It’s meek, it’s weak and the 1.5C goal is only just alive, but a signal has been sent that the era of coal is ending. And that matters,” she said. “While the deal recognises the need for deep emissions cuts this decade, those commitments have been punted to next year. Young people who’ve come of age in the climate crisis won’t tolerate many more outcomes like this. Why should they when they’re fighting for their futures?

“Glasgow was meant to deliver on firmly closing the gap to 1.5C and that didn’t happen, but in 2022 nations will now have to come back with stronger targets. The only reason we got what we did is because young people, Indigenous leaders, activists and countries on the climate frontline forced concessions that were grudgingly given. Without them, these climate talks would have flopped completely.

“Our once stable climate is now breaking down around us, you see it every day in wildfires, hurricanes, droughts and melting ice. Time’s up, we’ve run out of road, and as a matter of self-survival we need to urgently mobilise to create irrepressible pressure that finally ends the era of all fossil fuels.”

She added: “They changed a word but they can’t change the signal coming out of this COP, that the era of coal is ending. If you’re a coal company executive this COP saw a bad outcome.
“It’s in the interests of all countries, including those who still burn coal, to transition to clean renewable energy, and richer countries need to do more to support the shift. Our future depends on it.”

The Glasgow Climate Pact was signed after the event stretched into a further day but plans to include a pledge to “phase out” coal was watered down to “phase down” the use of coal after intervention from the Indian delegation. However, for the first time in the 26 meetings of the COP the agreement specifically includes clauses around oil gas and coal usage.