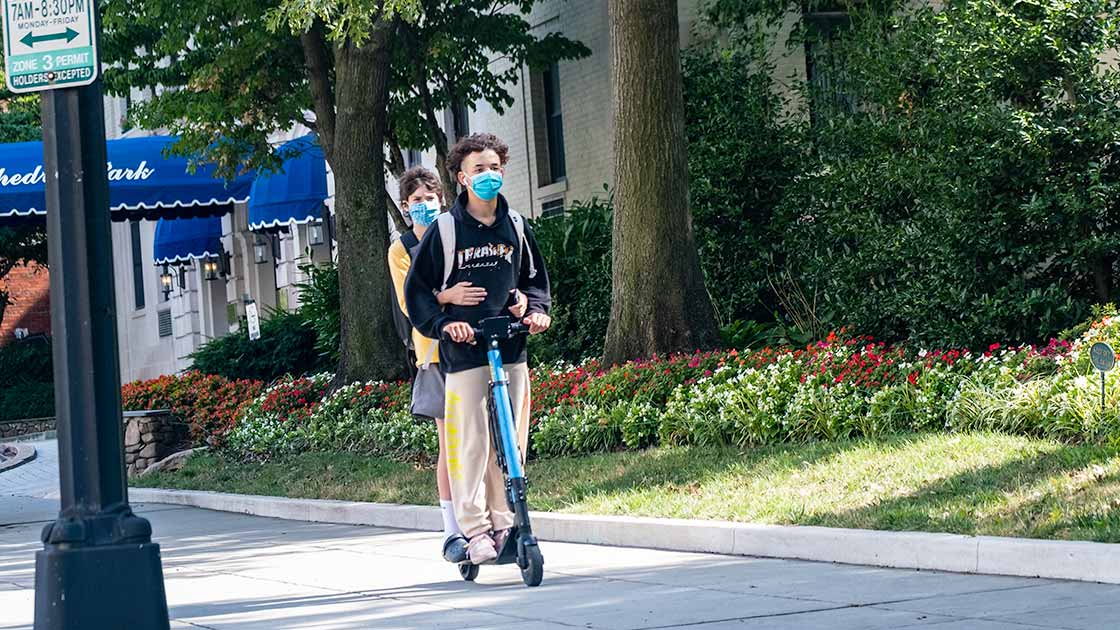 Two major studies into the safety and use of e-scooters have found riders are safer if they stick to the sidewalk.

The use of e-scooters has remained a controversial topic in countries across the world and in the UK the government are set to launch pilots in a number of cities to test their viability as a means of green transport. However, a number of fatalities and serious accidents have left some saying their use needs to be tightly controlled.

The two studies by the Insurance Institute for Highway Safety (IIHS) sought to look at where is the safest place for rider to use the vehicles on the road or on the pavement/sidewalk?

E-scooter companies like Bird, Lime, Lyft and Uber have seen ridership soar over the past several years, as urban planners and environmentalists seek to encourage micromobility and eliminate short car trips that contribute to greenhouse gas emissions. Shared e-scooters logged 86 million trips in the U.S. in 2019. Though e-scooter programs stalled as COVID-19 began, that number may grow as the pandemic grinds on and commuters look for socially distanced alternatives to the bus and subway.

To explore how e-scooters are affecting road safety, IIHS researchers interviewed more than 100 e-scooter riders whose injuries brought them to the emergency room at George Washington University Hospital in Washington, D.C., between March and November 2019.

One study examined how the severity of their injuries varied according to where and how they were injured. A second compared the rider demographics, usage patterns and injuries to those of 377 bicyclists who were interviewed as part of an earlier study.

“We didn’t see many e-scooter crashes with motor vehicles, and that may be a result of riders sticking mostly to the sidewalk,” said Jessica Cicchino, IIHS Vice President for Research and the lead author of the studies. “On the other hand, there are legitimate concerns that sidewalk riders could crash into pedestrians.”

Nearly three out of five e-scooter riders were injured riding on the sidewalk — and about a third of these riders got those injuries in places where sidewalk riding is prohibited. Only about 1 out of 5 was injured riding in the bike lane, multiuse trail or other off-road location.

Only about a quarter of the injured scooter riders were commuting to work. The rest were running errands or riding for fun or a social trip.

Past research has shown that most e-scooter riders prefer the bike lane overall, and the Institute found that one was rarely available in the instances in which riders were injured in the road or sidewalk. Moreover, riding alongside pedestrians may not be sustainable as usage continues to expand.

However, the IIHS said e-scooter riders may find they aren’t entirely welcome on any part of their city’s transportation network. Posters in bike forums sometimes complain about slow scooters in the bike lane, while some city administrators are struggling to get e-scooter riders off the sidewalk or force them to go even slower.

Operators were required to cap the top speed of e-scooters at 10 mph in D.C. beginning in January 2019, and sidewalk riding is prohibited in certain areas downtown. Cities like Denver and San Antonio have banned e-scooters from the sidewalks altogether, and other administrators have contracted with e-scooter companies to keep them off the sidewalk or control their speeds. But that could be a trade-off where safety is concerned.

“The picture is still not clear when it comes to where scooters should be ridden,” says Ms Cicchino. “Our results suggest that moving scooters off the sidewalk could put riders at risk of more severe injuries, but as things stand, they might be suffering these lesser injuries more often.”

Despite the prevalence of sidewalk riding, only six nonriders came to the emergency room with injuries caused by e-scooters during the study period. Four of them were pedestrians or bicyclists who fell tripping over, hitting or trying to avoid an e-scooter that wasn’t in use.

Bicyclists and e-scooter riders sustained different kinds of injuries, but they were mostly of similar severity.

About 60 percent of both groups sustained minor injuries and 9 percent in each group were admitted to the hospital. E-scooter riders treated in the emergency room suffered concussions with loss of consciousness and skull fractures more often than bicyclists. Only 2 percent of the injured e-scooter riders reported wearing a helmet, compared with 66 percent of bicyclists treated in the emergency room. One likely explanation is that most e-scooters are shared, and using one is often a spontaneous decision.

Scooter usage may continue to grow rapidly for quite some time, but some of the minor injuries suffered by riders may also disappear as the market matures according to the IIHS. Nearly 40 percent of the interview subjects were injured on their very first ride. In contrast, among the bicyclists interviewed in the emergency room, 80 percent said they cycle most days of the week during their main riding season.