Hydrogen is a vector of change and facilitator of decarbonisation for several sectors and significant investment will be required to develop hydrogen infrastructure, according to a recent report by Lloyd’s.

However, it adds, the use of hydrogen also introduces unique safety implications which will need to be appropriately identified, measured, monitored and managed, and insurers are well-placed to support customers across multiple industries with this.

According to the Lloyd’s Futureset Climate Action Report on Greener Energy, hydrogen is a fuel that produces no direct greenhouse gas emissions or other pollutants when combusted. Its lightness and energy density, combined with its ability to act as an energy carrier that can be used to store, move and deliver energy produced from other sources, makes it a key enabler in accelerating the decarbonisation of a range of sectors, including metals and mining, chemicals, domestic and international freight, heavy transportation, cement and agriculture. In addition, as a liquid fuel, hydrogen has key advantages in storage and transportation.

Green hydrogen has the potential to play a particularly prominent role in the storage and transmission of excess energy output from intermittent renewable energy assets, which can then be redeployed globally for heat, electricity and as a key energy input for industry.

How can hydrogen be used to support decarbonisation?

Hydrogen is widely used as a low-carbon alternative in many industrial applications as a fuel which is burned with oxygen. It can be used in fuel cells, internal combustion engines and industrial heating processes.

Hydrogen use today is mainly dominated by industry; however its potential uses span across the entire value chain from renewable energy generation, through to transportation, and homes and buildings. Hydrogen fuel cell technology can be used to power anything that uses electricity, with applications across transportation such as electric vehicles and aviation, and offers the benefit of higher energy efficiency than traditional combustion engines. Hydrogen can also be blended into existing gas networks to provide power to homes and public buildings.

In addition, hydrogen can be a leading option for storing renewable energy when converted into a carrier such as ammonia, helping to manage both the variable output from renewables as well as the transportation of renewable energy over long distances, such as from offshore wind farms.

The Sustainable Markets Initiative has established a Hydrogen Taskforce to support and accelerate the deployment of hydrogen globally as one of the decarbonisation tools critical to facilitating net zero emissions. The Task Force, chaired by Shell, has committed to a number of actions ahead of COP 26 in November 2021 including: creating a template for a hydrogen ecosystem to act as a basis for a hydrogen energy-based economy, developing formal pledges with participating companies committing to the use of clean hydrogen in their supply chains, and identifying policy and regulatory levers needed to accelerate the adoption of hydrogen fuel cells in transportation.

According to the report, a key obstacle to the success of hydrogen is the infrastructure required to achieve scale. Though the technology to use hydrogen for heat, electricity and as an input for industry has existed for some time, infrastructure is essential to enable the hydrogen economy to operate across its full value chain from upstream production, to midstream storage and transmission to downstream fuelling and distribution.

It suggests that any development should enable hydrogen to be transported at scale through the existing gas transmission network or via the use of specialised vehicles that can transport hydrogen safely. The conversion of existing natural gas pipelines to deliver hydrogen is a significant and costly undertaking as hydrogen’s potential to embrittle steel pipelines above a certain concentration threshold will result in the need for pipeline modification.

In addition to the cost of any hydrogen transportation infrastructure modification or introduction, hydrogen itself is currently costly to produce. Green hydrogen production costs could fall by up to 30% by 2030 according to some projections, however such a reduction would be dependent on a decline in the cost of renewable energy, an increase  in production to benefit from economies of scale, and significant investment to achieve economic viability.

The production of low-carbon hydrogen is in its early stages, with less than 0.7% of hydrogen production globally currently “clean” (i.e. blue or green hydrogen). There is an expectation that this proportion will grow significantly should national governments achieve the ambitions contained within their respective hydrogen strategies, however it remains to be seen whether these obstacles to success can be overcome collectively by industry, insurers and government.

According to Lloyd’s, the insurance industry can help to de-risk investment into hydrogen infrastructure and incentivise private-sector investment. This will ultimately enable the hydrogen economy to achieve scale and therefore drive down production costs. This will, however, require a  long-term government policy framework to give investors the certainty they require, connectivity between individual projects and a broader infrastructure network to ensure the hydrogen economy can operate across its entire value chain, and a clear risk allocation mechanism between governments, the private sector and insurance providers where such risks are too great for one stakeholder to carry alone.

The report also notes that the Lloyd’s market is already providing specialist insurance cover for safety risks associated with the transportation of hydrogen. Such cover will likely need to be scaled, particularly as the modification of existing gas transmission pipelines continues to gather pace.

It adds that insurance cover is already relatively well established for offshore wind projects involved in green hydrogen production (recognising that this subset of the offshore wind market is still in early stages of development). There is a precedent on which the insurance industry can build to provide broader coverage to other segments of the hydrogen economy and its value chain.

This is an abridged version taken from the recent Lloyd’s Futureset Climate Action Report on Greener Energy. To read the full report click here. 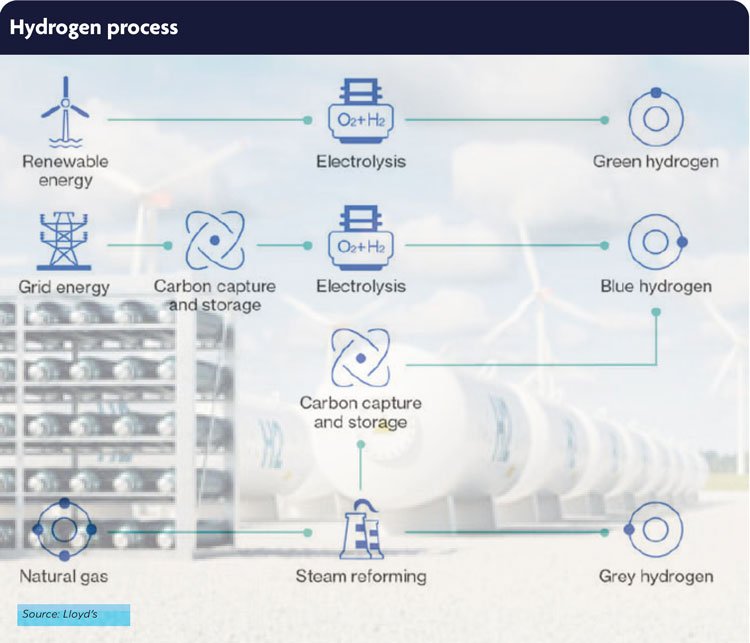