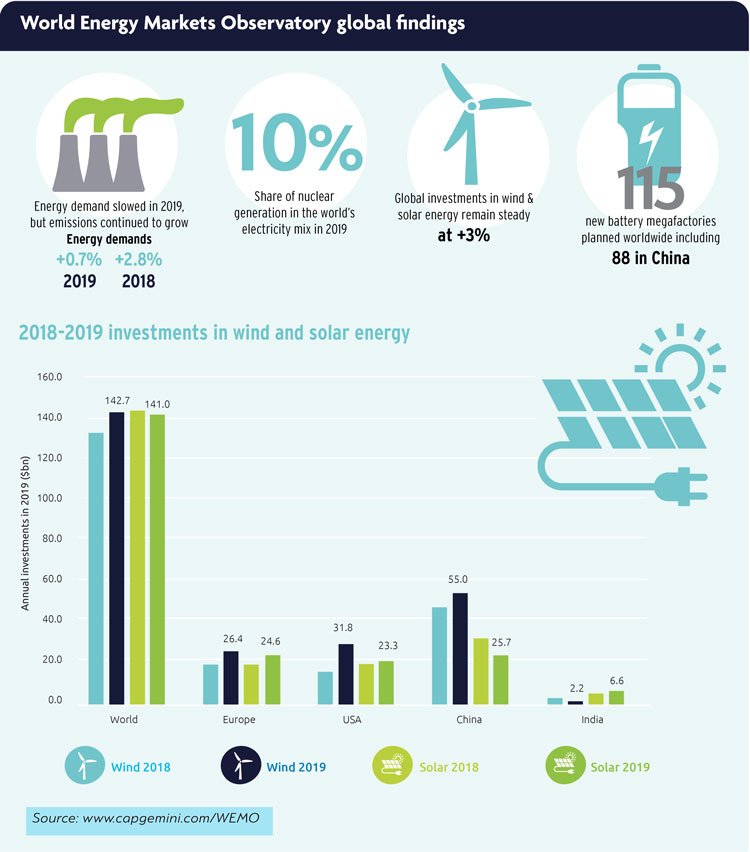 Emissions slump but concerns over move to renewables remains

Research has found the significant drop in energy consumption due to COVID-19 has led to the largest reduction of greenhouse gas (GHG) emissions since World War II.

The report by Capgemini cautioned that while the pandemic has had a profound impact ion emissions long-term climate change goals are still “very challenging”.

The firm has published the 22nd edition of its annual study, the World Energy Markets Observatory (WEMO) report, which found with the worldwide economic growth slowdown in 2019, GDP growth for G20 countries was 0.8 points below the previous year.

As a result, energy demand growth slowed down with consumption increasing by just 0.7 percent, as compared to 2.2 percent in 2018. While global emissions continued to increase by 0.6% in 2019 (highest level ever), those in the energy sector specifically fell 0.4 percent due to a combination of factors including: a shift from coal to gas; renewables growth; and energy efficiency improvements.

The significant drop in consumption due to COVID-19 has led to the largest reduction of GHG emissions since World War II. Emissions are expected to decrease by an estimated 7 to 8 percent in 2020, as a result of mobility restrictions and a sharp industrial slowdown.

However, despite the seemingly positive data in 2020, according to Colette Lewiner, Energy and Utilities senior advisor at Capgemini, these reductions are temporary: “This 2020 emissions decrease is linked to the lock-down period and remaining mobility restrictions. Emissions will likely rise again as the world recovers from the pandemic.

“By way of illustration, it would take a similar restriction, every year for the next 10 years, to get on the right environmental trajectory, which is of course unviable. Profound changes are needed to reach climate change objectives.”

Thew research found renewables now account for more than half of the worldwide electricity generation investments, more in developed countries and less in developing countries that continue to build coal and gas plants to meet a booming electricity demand. With the growing renewables market and the progress of technology achievements, costs are declining again by more than 10% (Wind and Solar) in 2019, with consistently lower costs being recorded month after month. Offshore wind now seems promising while onshore acceptance remains the problem.

Batteries for electric vehicles and stationary storage costs decreased again by 19% in 2019 (for Li Ion batteries), and 115 mega-factories’ projects have been recorded, out of which 88 are in China. Asian players (China, Japan and South Korea) are dominating this market.

However, with the increasing share of intermittent renewables generation (wind and solar power), the report warned grid balancing is more difficult, and security of supply could be endangered. This situation was illustrated both in Europe and the US this year:

-In April 2020, during lockdown, electricity consumption decreases in Europe, combined with sunny and windy weather, resulted in high shares (up to 60 to 70%) of renewable electricity on the grid. Near blackouts happened in Germany and in the UK, demonstrating that grids and regulations have not adapted to deal with the high share of renewables planned for the end of the decade.

-By mid-August 2020, during a heat wave, California experienced rolling blackouts where electricity supply relies on 33% from renewables, mostly from solar energy. This is challenging on hot summer evenings when electricity from solar generation drops to zero but demand for air conditioning remains. This challenge will intensify if California meets its targets of 60% renewable electricity by 2030 while phasing out fossil fuel and nuclear plants schedulable generation.

The significant drop in consumption due to COVID-19 has led to the largest reduction of GHG emissions since World War II. Emissions are expected to decrease by an estimated 7 to 8 percent in 2020, as a result of mobility restrictions and a sharp industrial slowdown.