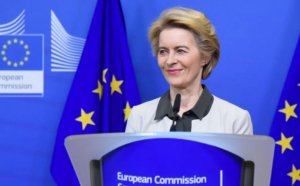 As the European Union announced it had completed work on its European Green Deal the move has been welcomed by environmental groups.

President of the European Commission, Ursula Von der Leyen, (pic) hailed the deal as a “very special day” for the continent.

“Therefore, the European Green Deal is on the one hand about cutting emissions, but on the other hand it is about creating jobs and boosting innovation.

“I am convinced that the old growth-model that is based on fossil-fuels and pollution is out of date, and it is out of touch with our planet. The European Green Deal is our new growth strategy – it is a strategy for growth that gives more back than it takes away.”

Ms Von der Leyen added while the EU wanted to be the frontrunners in climate friendly industries, in clean technologies, in green financing, it needed to ensure that no one is left behind.

“This transition will either be working for all and be just, or it will not work at all. And therefore, a crucial part in the European Green Deal is the Just Transition Mechanism. We have the ambition to mobilise EUR 100 billion precisely targeted to the most vulnerable regions and sectors.

“The European Green Deal is a broad roadmap: We care also about biodiversity and forests, agriculture and food, green cities and for example the circular economy.

“We do not have all the answers yet. Today is the start of a journey. But this is Europe’s ‘man on the moon’ moment. The European Green Deal is very ambitious, but it will also be very careful in assessing the impact and every single step we are taking.”

She added: “European citizens are changing their lifestyle to help protect the climate and the planet. Therefore, our European Green Deal tells them that Europe is at their side. The European Green Deal is something – I am convinced – we owe to our children because we do not own this planet. We just do have for certain time the responsibility and now it is time to act.”

The deal was welcomed by Dr Monica Verbeek, Executive Director of Seas At Risk.

“Compared to Mr Juncker’s 10 priorities for the Commission in 2014-2019, the European Green Deal looks like the Von der Leyen Commission took a quantum leap, putting climate and nature high on the agenda,” she added. “We are concerned however that its ‘green growth’ focus seems to go against the European Environment Agency’s warning that Europe will not succeed in ‘living well within the limits of the planet’ by continuing to promote economic growth.”

Dr Verbeek added: “We are glad to see that the role of seas and ocean is acknowledged, but it is as yet unclear how the European Green Deal will counter the relentless push for blue growth, stop overfishing and make our ocean healthy and resilient again. We look forward to discussing concrete actions with the Commission and other stakeholders during our Ocean Action! conference on 5 February, when we will launch our joint NGO Blue Manifesto”.

SHARE:
Fears That X Will Put Market on The Spot