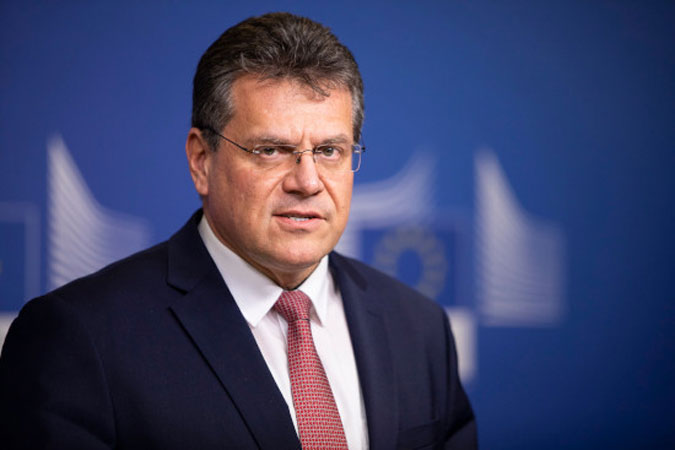 The European Commission has warned the coming week will be make or break as fears that the trade deal between the European Union and the UK will be scrapped.

As both sides warned the other needed to make concessions to enable the talks to continue, there is a growing fear that the red lines on London and Brussels remain too hard to cross.

EC vice-president Maroš Šefčovič (pic) has spelt out the commission’s plans which he said would create a express lane for the movement of goods between the two.

Having emerged from the meeting with the UK team headed by the chief UK negotiator David Frost he said: “The Commission has been engaging intensively with the UK to find common ground between our respective positions – and to bring stability and predictability for the people and businesses in Northern Ireland.

“We have spared no effort in preparing this package and bringing it across the finishing line. Our package, as a whole, will provide significant changes for operators on the ground.”

Šefčovič  added  that In practice,” our proposal would create a type of ‘Express lane’.

“Customs-related red tape would be cut in half. A significant range of retail goods would also benefit from simplified certification. This would result in a reduction of up to 80 percent of SPS checks.

However he warned that the efforts from the EU needed to be reciprocated.

“This was a big move by us,” added Šefčovič. “But until today, we have seen no move at all from the UK side. I find this disappointing and once again, I urge the UK government to engage with us sincerely.

“From this perspective, I see next week as an important one. We should focus all efforts on reaching a solution as soon as possible. Our aim should be to establish stability and predictability for Northern Ireland.”

He said talk of a move to renegotiate the deal would have far reaching impacts.

“We hear a lot about Article 16 at the moment. Let there be no doubt that triggering Article 16, to seek the renegotiation of the Protocol, would have serious consequences.

“Serious for Northern Ireland, as it would lead to instability and unpredictability. And serious also for EU-UK relations in general, as it would mean a rejection of EU efforts to find a consensual solution to the implementation of the Protocol.”