An important new report by Aon says that as the world contemplates the current and looming impacts of climate change, we must examine the effects we are already experiencing today and the steps that can be taken to start mitigating and preparing right now.

In the past decade alone, the broker says, weather-related disasters have resulted in nearly $3 trillion in economic damage. This accounts for 85 percent of total natural peril losses. These losses include direct impacts from such perils as tropical cyclones, flooding, and wildfires – all of which are demonstrating changing behavior that is putting more lives, livelihoods and property at risk.

Here we present its analysis of one aspect of one of the important recent climate-related disasters:

What Happened? One of the natural hazards frequently associated with ongoing and projected future impacts of climate change is precipitation. The peril manifested itself in many parts of the world during 2021 with disastrous consequences. Two emblematic events occurred in mid-July and rewrote history books by setting new records for the costliest catastrophe events for the local insurance sectors: flash flooding in Western Europe, primarily Germany, Belgium, and the Netherlands; and the Henan provincial region floods in China that left devastating impacts in the Zhengzhou metro area.

Across some parts of Germany and elsewhere in western and central Europe, nearly two times the annual July rainfall average fell in a 72 to 96-hour period that overwhelmed many rivers and streams. The major flooding revealed stark regional differences in insurance take-up rates between federal states which further underscores the challenges of a protection gap in a world where climate change impacts are becoming more apparent. The German Insurance Association notes that only 37 percent of buildings in Rheinland-Pfalz, the most affected state, are comprehensively insured against flood damage. This compares to 47 percent in Nordrhein-Westfalen, which is close to the national average.

Following a historic volume of rainfall that fell in Zhengzhou, China (Henan Province) in mid-July, there was even more focus on the significant protection gap which exists in the country. On July 20 alone, Zhengzhou recorded 612.9 millimeters (24.13 inches) of rain. This compares to its total annual average rainfall of 640.8 millimeters (25.23 inches). Catastrophic flooding occurred that led to more than 552,000 insurance claims being filed. Despite the local Henan insurance industry citing a record &1.9 billion in insured loss from the event – the costliest weather event on record for Chinese insurers – it still represented less than 10 percent of the overall economic loss.

The Impact of Climate Change There has been vigorous discussion regarding the role of climate change in both events. The tremendous volume of rainfall that occurred was consistent with what scientific research continues to highlight as expected with warming in the oceans and atmosphere. Warmer temperatures act as an accelerant to the evaporation process – often over the oceans or other large bodies of water – then place more water / moisture into the atmosphere. A basic law of thermodynamics – derived from the Clausius-Clapeyron equation – notes that for each 1°C (1.8°F) of atmospheric warming the air can hold up to 7 percent more moisture. Simply put: Warmer air can hold more water vapor than cooler air.

Despite uncertainties related to climate model data output, there is mounting evidence pointing to more frequent or intense heavy rainfall episodes in some regions. This can translate to a higher flood risk depending on location, infrastructure investment, land use, etc. These heavier rains are also tied to “wavier” behaviour of the jet stream which can stall and allow significant rains to fall over the same areas for an extended period.

While there are varying levels of uncertainty around the climate change influence on individual weather perils, scientists are more confident about its impact on heavy rainfall. As noted earlier, a warming atmosphere has increasingly led to more extreme flood incidents. This level of understanding is critical as near- and long-term planning strategies are developed to determine ways to limit future flood-related impacts to life and property. The graphic below highlights how understood the climate change influence is on specific perils and how certain / confident scientists are on the influence on individual events.

Action Required! One important step to communicate rainfall and flood risk is via return periods – or how likely such an event is expected to occur. For example: A 100-year event means there is a 1 percent chance of such an event occurring at a location in any given year. It does not mean that it will be another 100 years until another such event happens again. The increased influence of climate change suggests that what is considered a 1-in-100-year event today may becoming a 1-in-75 or 1-in-50-year event in the future. An understanding of this likely shift in event occurrence frequency is highly important when developing risk mitigation and adaptation plans. Such analysis will only enhance the essential need for more regularly updated flood mapping and flood risk tools.

The above is an abridged version of a report from Aon,

How the impacts of climate change are becoming more evident with each new catastrophe. To read the full report, click here. 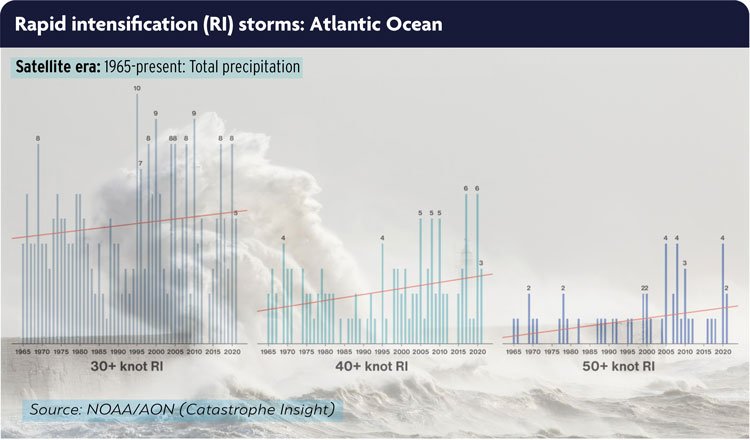 In the past decade alone, Aon says, weather-related disasters have resulted in nearly $3 trillion in economic damage. This accounts for 85 percent of total natural peril losses.