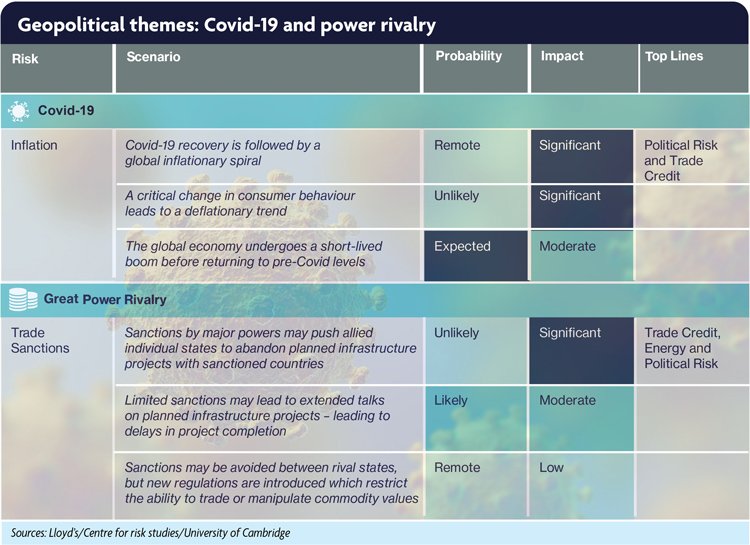 According to the report, geopolitical power centres have shifted since the financial crisis, driven by several macro-trends, including rising populism and the decline of the US’ role as a conflict mediator, according to Lloyd’s.

Shifting powers: meeting the challenges of the geopolitical landscape, explores the transformation of the geopolitical risk landscape over the last decade and focuses on the ten most pressing risks these themes present today, which range from cyber-attacks, social unrest and the migration crisis.

The research also provides a strategic perspective on these systemic risks, while analysing their probability and impact.

Here we present some of the core geopolitical themes contained in the report:

The impact of Covid-19 on geopolitical relationships

Once the coronavirus pandemic ceases to be a public health crisis, it will have already fully transformed into a geopolitical one, with deep and long-lasting political and economic implications that will likely change the global order as we know it. The crisis has caused a global recession. To various degrees, GDP plummeted in all regions last year. The IMF estimates global economic output to have shrunk by 3.5% in 20201, with advanced economies projected to take the longest period to recover as the pandemic exacerbated underlying, chronic issues inhibiting growth but with losses expected to be largest among low-income countries. Overall, the virus will reshape the geopolitical landscape of the next decade and, with it, the global operating environment for businesses.

The US is moving away from its role as Global policeman and conflict mediator. In the background, other great powers such as Russia and China are more confidently advancing their strategic interests. The EU is also seeking greater strategic autonomy. The result of this is that businesses are operating in an increasingly unpredictable international environment. As a result, we can expect trade sanctions, tariffs, disruption of supply chains, greater regulation, and barriers to new investment. We can expect to see regional alliances forming giving preferential treatment to those involved. In response, companies may need to diversify and localise their supply chains and re-think their cross-border strategies.

While globalisation began to stall a decade ago, Covid-19 is likely to accelerate the trend towards more regional and national approaches. The anti-global sentiment that has characterized Western politics in the past decade is now challenged by new tensions between major trading blocs showing no signs of abating. The anti-globalization backlash and increased protectionism pose major challenges for multinational enterprises and trade dependent firms, with Covid-19 exacerbating underlying transformations in trade, supply chain, and globalization.

In the coming years, the global trade system will likely develop into a system of large regional trade agreements, with increased cooperation within and potential tensions between nations.

For much of the early 21st century, geopolitical risks featured relatively low in risk management discussions for major multinational firms. These assumptions began to change with the arrival of the Arab Spring and Occupy movements and then, markedly, with the conflict over Crimea.

There is now a common understanding that geopolitical strategy very often underpins the competitive business environment, and that systemically important multinationals can be seen as extensions of state borders and interests overseas, increasing their exposure to geopolitical events.

The major consequences of geopolitical risks to multinationals include: the disruption of supply, sales opportunity loss, price and currency fluctuations, and legal and reputational risk.

The geostrategies of multinationals following the pandemic will play a significant role in the process of recovery and restoring strength in the globalised economy, shoring up trade relationships and pursuing more sustainable partnerships built around improving public health and digital resiliency. Firms with strong ties to specific multinational firms should consider how their strategies would be impacted should such a major partner become impaired in some way, either globally or in a particular region.

Despite the occasional assertion that we are currently enjoying the most peaceful era in history, fear of conflict and political violence remains a constant in the modern world.

The causes of geopolitical conflict are deep-seated and may be endemic and, therefore, modern wars tend to be tenacious, devolving into political quagmires, drawing in foreign militias, and leading to massive displacement and years of social upheaval and unrest.

Sustained state violence, or the threat of war, contributes to instability and insurgency. In these situations, power structures become eroded and militias or other insurgent groups offer a kind of stability to the disenfranchised.

As the world moves more rapidly towards multi-polarity and increasing competition between major powers, proxy wars and their wider effects, including retaliatory sanctions, attacks, and diplomatic actions, will become more long-lasting and entrenched, cooling off for years before escalating again quickly.

This article presents some of the key findings from the report. To access the full report click here. 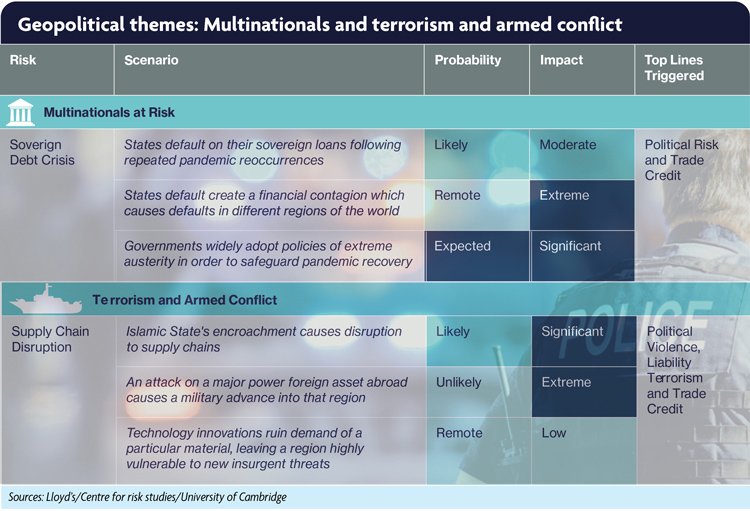