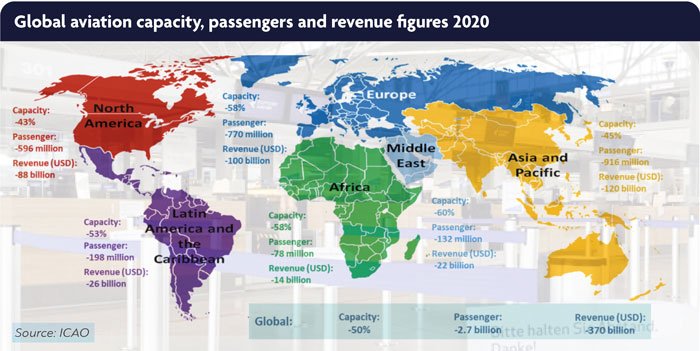 The world’s airlines are facing a fight for survival as passenger numbers plunged by 60% last year.

The latest study by the International Civil Aviation Organization (ICAO) has warned the fall in passenger numbers saw the global aviation industry shrink to 2003 levels. It added that the potential for a swift recovery was hampered by the continued spread of the virus and ongoing travel restrictions across the globe.

The ICAO reported seat capacity fell by 50 per cent last year, passenger totals dropped by 60 per cent with just 1.8 billion passengers taking to the air during the first year of the pandemic, compared to 4.5 billion in 2019.

The study estimated airline financial losses were $370 billion resulting from the impact of the pandemic, with airports and air navigation services providers (ANSPs) losing a further $115 billion and $13 billion, respectively.

“With the wide-scale lockdown measures, border closures, and travel restrictions being set out around the world, by April 2020 the overall number of passengers had fallen 92 per cent from 2019 levels, an average of the 98 per cent drop-off seen in international traffic and 87 per cent fall in domestic air travel,” said the ICAO.

“Paralysed revenue streams resulting from the plunge in air traffic has led to severe liquidity strains across the aviation value chain, placing the industry’s financial viability in question and threatening millions of jobs around the world,” warned the organisation.

The global $370 billion drop in gross airline passenger operating revenues represented losses of $120 billion in the Asia/Pacific, $100 billion in Europe, and $88 billion in North America, followed by $26 billion, $22 billion and $14 billion in Latin America and the Caribbean, the Middle East and Africa, respectively.

The ICAO said it estimated that the near-term outlook was for prolonged depressed demand, with downside risks to global air travel recovery predominating in the first quarter of 2021, and likely to be subject to further deterioration.

It expected any improvement in the global picture only by the second quarter of 2021, though this will still be subject to the effectiveness of pandemic management and vaccination roll out.