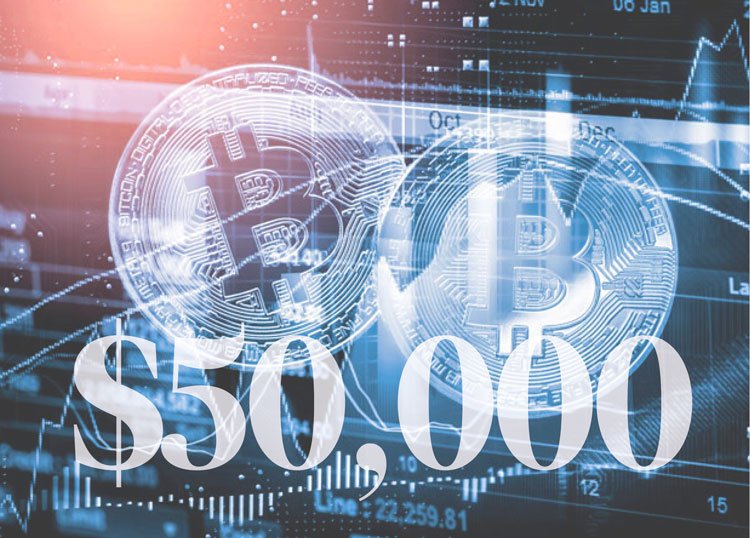 Cryptocurrency Bitcoin soared above $50,000 on Tuesday 16 February to reach an all-time high.

However, opinion remains divided as to whether this price is realistic and simply reflects increasing mainstream acceptance amongst investors and companies, or whether the currency is merely a bubble waiting to burst.

Bitcoin’s price has risen around 70% so far this year, with most of the gains coming after electric carmaker Tesla put its weight behind it.

Tesla said it bought $1.5bn worth of Bitcoin in January as part of a strategy to maximise returns on cash that is not being used in the day-to-day running of the company.

The move by Tesla, which also said it would accept Bitcoin as payment, was the latest in a series of larger investments from mainstream companies that have, in the eyes of some investors and commentators, nudged Bitcoin towards financial respectability.

JPMorgan claimed in January that Bitcoin has emerged as a rival to gold and could trade as high as $146,000 if it becomes established as a safe-haven asset.

Despite such an endorsement, a number of sceptics remain. Despite being held as the new forefront of payments technology, Bitcoin and other cryptocurrencies have attracted criticism from central bankers and other financial heavyweights amid concerns over the stability of their value as well as their unregulated nature.

Last month US Treasury Secretary Janet Yellen and European Central Bank President Christine Lagarde both called for tighter oversight of Bitcoin due to concerns over its potential use for criminal activities such as money laundering.

Last year the governor of the Bank of England Andrew Bailey also warned that digital currencies such as Bitcoin will not last long in their current form due to a lack of design and governance that will give them staying power in global finance.

Bailey said while digital innovation in payments was likely to remain, cryptocurrencies in their current form were unlikely to last. “There have been huge innovations in payments in recent years but we still have some very big gaps to fill…Have we landed on what I would call the design, governance and arrangements for a lasting digital currency? No, I don’t think we’re there yet. I don’t think cryptocurrencies as originally formulated are it”, Bailey said.

However, the central bank governor said there is room for innovation, particularly concerning cryptocurrencies that derive their value from a different asset or basket of assets such as the US dollar or gold.

JPMorgan claimed in January that Bitcoin has emerged as a rival to gold and could trade as high as $146,000 if it becomes established as a safe-haven asset.