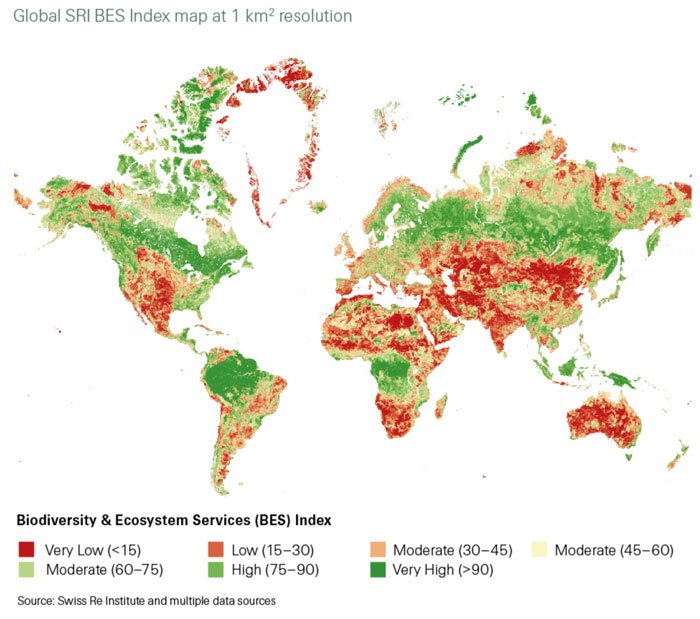 Swiss Re has warned a looming biodiversity crisis threatens over half of the global economy as ecosystems are on the brink of collapse.

The Swiss Re Institute’s  has launched its new Biodiversity and Ecosystem Services Index,  which highlight the threat is not limited to emerging or developing economies.

It said countries across the world are reliant on a range of services that are based around their natural ecosystems. Biodiversity and Ecosystem Services (BES) include such necessities as food provision, water security and regulation of air quality that are vital to maintaining the health and stability of communities and economies.

It found over half (55%) of global GDP, equal to $41.7 trillion, is dependent on high-functioning biodiversity and ecosystem services. However, a staggering fifth of countries globally (20%) are at risk of their ecosystems collapsing due to a decline in biodiversity and related beneficial services, reveals the study.

Christian Mumenthaler, Swiss Re’s Group Chief Executive Officer, said: “There is a clear need to assess the state of ecosystems so that the global community can minimise further negative impact on economies across the world. This important piece of work provides a data-driven foundation for understanding the economic risks of deteriorating biodiversity and ecosystems. In turn, we can inform governmental decision-making to help improve ecosystem restoration and preservation. We can also support corporations and investors as they fortify themselves against environmental shocks. Armed with this information, we can also ensure the provision of stronger insurance services.”

The study found developing countries that have a heavy dependence on agricultural sectors, such as Kenya or Nigeria, are susceptible to BES shocks from a range of biodiversity and ecosystem issues.

Among G20 economies, South Africa and Australia top the rankings of fragile BES. The well-known impact of water scarcity is a driver for these countries, alongside factors such as costal protection and pollination. Brazil and Indonesia enjoy the highest percentage of intact ecosystems within the G20, however, the countries’ strong economic dependency on natural resources highlights the importance of sustainable development and conservation to the long-term sustainability of their economies.

A United Nations Summit on biodiversity next week is set to call for “urgent action on biodiversity for sustainable development” as global efforts to improve in this vital area have fallen well below UN targets to halt biodiversity loss.

It added major economies in Southeast Asia, Europe and America that already have diversified economies are nevertheless also exposed to risk from BES decline. This is because important individual economic sectors can be impacted by single BES factors such as water scarcity, which can have a disruptive effect on a country’s manufacturing sectors, properties and supply chains.

The report discusses how addressing BES challenges through simple preservation actions can have significant impacts. For example, ecosystem restoration along the coast of Louisiana could reduce expected flood costs by $5.3 billion annually. Steps to ensure functioning coral reefs globally could lower estimated flood damages for 100-year storm events that would otherwise increase by 91% across the globe .

The Swiss Re Institute report that accompanies the launch of the index, “Biodiversity and Ecosystem Services: A business case for re/insurance”, highlights several real-life cases of how BES impact economies. For example, the destruction of the Aral Sea, which led to economic collapse and mass migration from the surrounding coastal area, provides an extreme illustration of how the collapse of an ecosystem can affect a local economy. Other examples include the economic impacts of invasive species, nutrient run-off and algal blooms or the effects of the loss of pollinators on the agricultural sector. Global medical research is also very much at threat from the decimation of rainforests, as almost 50% of all medicines are sourced from natural resources within this habitat.