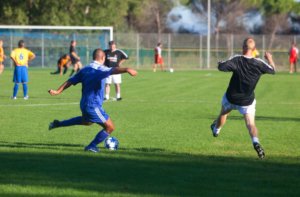 A Semi-professional footballer who starred for his club whilst claiming injuries sustained in a car accident left him unable to work has been fined after being found guilty of dishonesty in court.

Richard (Richie) Allen, 37, was ordered to pay £6,000 in costs after a court ruled he made a dishonest claim for whiplash following a car accident.

Law firm Horwich Farrelly, working on behalf of Tansar, a Managing General Agent who provide a range of specialist UK insurance products underwritten by Gefion Insurance, proved the claim made by the former Salford City FC player was fundamentally dishonest.

The court was told after being involved as a passenger in a motor collision in Preston in January 2017, Allen claimed he was injured for 11 months and unable to work. Despite these claims he continued to play several matches for Salford City FC until the end of their National League North title-winning season in 2017/18, as well as going on to play for Longridge Town FC of the North West Counties League Premier Division. In total he played more than 30 matches after the accident disproving his claim that he was injured.

When Horwich Farrelly exposed that Allen had indeed been playing in football matches despite saying he was injured, his defence was that he was able to play because he was self-medicating with illegally purchased steroids in order to hide his injuries as he had no other means of income besides football. Despite these claims Horwich Farrelly pushed for the case to go to court where the judge found Allen fundamentally dishonest and ordered him to pay costs of over £6,000.

Commenting on the case, Jared Mallinson, fraud Partner and Tansar client account manager at Horwich Farrelly said: “We are thrilled with the outcome of this case because it demonstrates that Horwich Farrelly will continue to fight unmeritorious claims no matter the background of the claimant. It once again proves that dishonest claimants come in all shapes and sizes, no matter age, profession or where they live. The court’s decision to find Allen fundamentally dishonest is a red card to any would-be insurance cheat that they will be caught and face a suitable punishment.”

Russell Pollard, Chief Claims Director at Gefion Insurance – the underwriter for Allen’s policy said: “Gefion are very pleased with this finding. At Gefion we take a robust approach to identifying and investigating suspected dishonest claims. It is our moral obligation to prevent premiums paid by honest paying policyholders being used to pay dishonest claimants.”