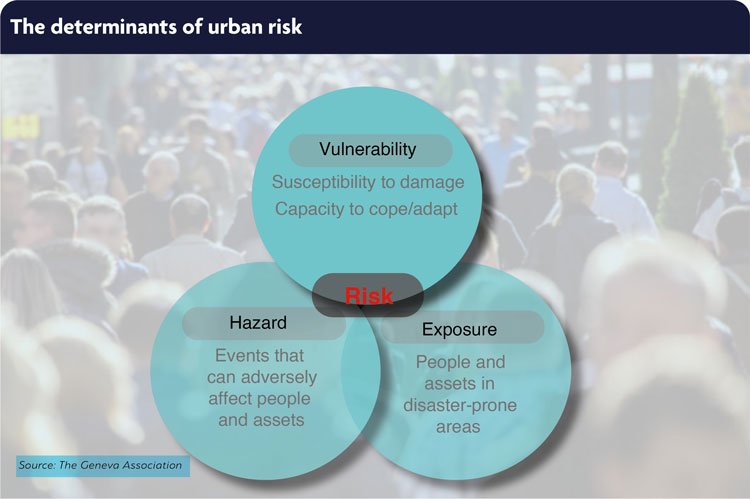 Urbanisation transforms formerly rural areas into urban settlements and shifts the distribution of populations accordingly. It covers changes to occupations, lifestyle, culture and behaviour. As such, it reshapes the demographic and social structure of
both urban and rural areas, with profound implications for the (insurable) risk landscape.

Going forward, urban risks are expected to be driven by three main underlying trends: climate change and extreme weather events; smart urbanisation and the risk of systemic and catastrophic disruptions; and socio-demographic shifts such as income and wealth inequality. These trends have the potential to adversely affect critical parts of a city’s operations, putting the health, lives, livelihoods and assets of inhabitants at risk.

Man-made climate change not only directly affects the frequency and severity of weather-related hazards, it also brings longer-term shifts such as sea level rise, water scarcity and quality issues, as well as sustained higher temperatures and heatwaves. Grouped together as chronic physical climate risks, these changes may render existing social and physical systems in cities ineffective, e.g. infrastructure in the face of more frequent storm surges or snow storms, and exacerbate social vulnerabilities.

Smart urbanisation is characterised by a move to technology- based urban infrastructures aimed at delivering city services more efficiently and effectively to foster urban resilience
and sustainability. However, the expected benefits can be accompanied by unintended consequences, e.g. an increasing exposure to catastrophic scenarios such as space weather and heightened security and criminal risks.

Most cities are characterised by significant inequalities in economic, social and living conditions. Informal settlements, like slums, are the most pronounced manifestation of inequality and continue to be a growing feature of the urban landscape and a persistent risk for municipal authorities. Demographic shifts, such as the rapid ageing of mature market urban populations and the rise of middle-class populations in emerging economies, also impact future urban risk landscapes.

Though urban risk profiles are city-specific, certain hazards are common to virtually all urban areas:

triggered by natural hazards. In combination with vulnerabilities and exposures, these hazards develop into major urban risks, which are augmented by the drivers outlined above.

Man-made climate change is leading to physical and transition risks, driven by changes to legislation and policies in the pursuit of net-zero objectives or failure to invest in climate-resilient infrastructures or manage the risks associated with new technologies.

Smart urbanisation may give rise to an increase in (un)intentional man-made hazards (such as malicious cyberattacks) and, as a result, increasing levels of cyber risk.

Finally, socio-demographic shifts may translate into intentional man-made hazards (such as political violence) and could also favour the spread of high-impact respiratory pathogens. In combination with growing exposures and vulnerabilities, these hazards heighten political and health risks, respectively.

The high concentration of people and economic value in cities amplifies the loss potential from urban risks, meaning cities have a bigger need and scope for insurance than rural areas. This includes both personal lines and commercial insurance. With the rise of city-level risk management, insurance is also set to become more relevant to urban risk mitigation strategies.

However, a number of insurance-specific challenges need to be addressed, too, primarily arising from population density, asset accumulation and the interconnectivity of risks. Uncertainty surrounding climate change and the increased frequency and severity of weather-related natural catastrophes adds to the list of long-standing challenges. In addition, as demonstrated by COVID-19, increased mobility and high population density can drive pandemic risk.

Fiscal constraints on all levels of government were significantly exacerbated by emergency responses to the pandemic. These constraints will soon make themselves felt. Federal governments may be less inclined to step in as ‘insurers of last resort’ for municipalities, and governments are set to look differently at private-sector insurers as potential risk takers.

Based on our expert interviews and desk research, we offer the following four recommendations for insurers and public authorities. The first two require close collaboration between the public and private sectors while the latter two are more relevant for insurers and municipal authorities, respectively.

The above is a summary of the report, Future Urban Risk Landscapes: An insurance perspective, by The Geneva Association. To read the full report, click here. 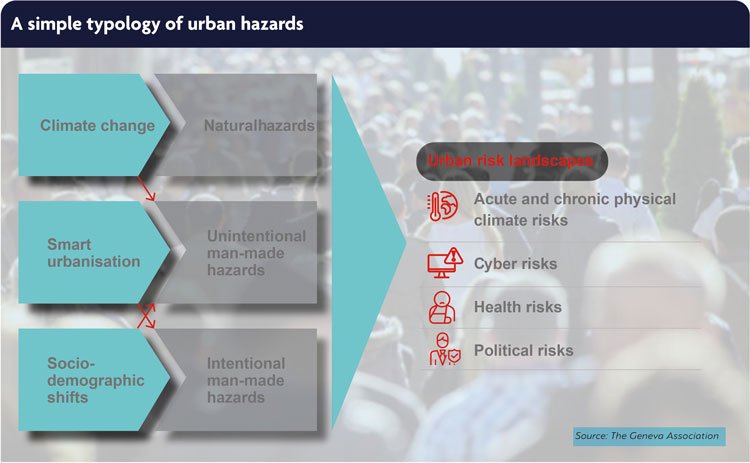 Man-made climate change is leading to physical and transition risks, driven by changes to legislation and policies in the pursuit of net-zero objectives or failure to invest in climate-resilient infrastructures or manage the risks associated with new technologies. 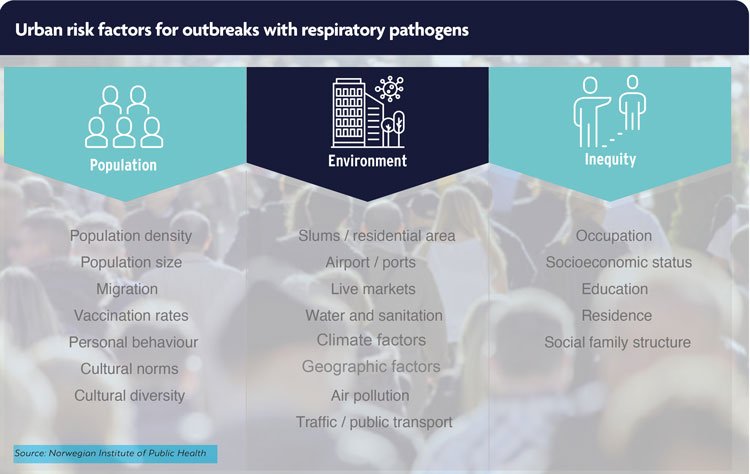