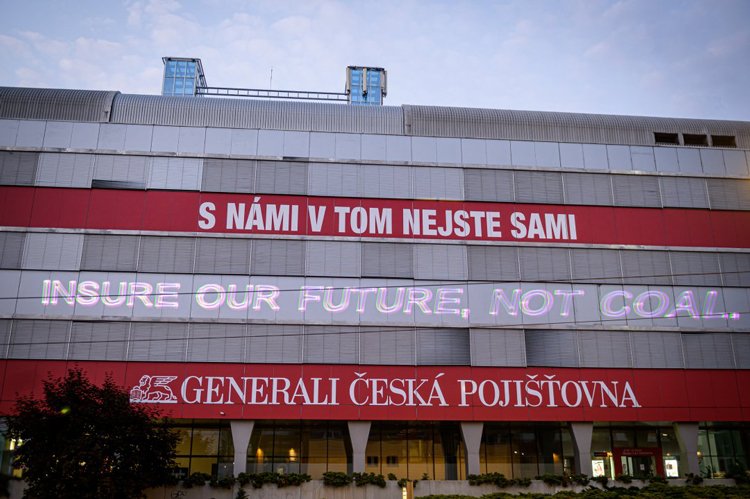 The headquarters of insurer Generali’s Czech operation has become the subject of the latest protest by climate campaigner over the insurance for coal projects.

Staff arrived at the office in Prague to find  that the slogans, “Generali: insure our future, not coal!” and “Cambiamento climatico assicurato”, had been laser beamed onto the building.

The protest had been organised by Czech civil society organisation Re-set which called on the insurance company to help solve the climate crisis and stop supporting the mining and burning of coal.

Generali recently acknowledged the need to phase out coal by 2030 at its annual general meeting at the end of April, and is currently reviewing its climate policy. However, campaigners said the firm it still provides a special exemption to the Czech company ČEZ, which is currently working under a strategy that will continue to run coal  power plants beyond 2030, and potentially still burn coal up until 2050.

The campaigners added instead of actually closing coal-fired power plants, it said ČEZ has been selling them to other coal companies, as detailed in a recent report by Re-set.

Re-set added that Generali along with with Vienna Insurance Group, are the last two insurance companies in the Czech Republic that still plan to provide their services to the coal industry in the long term. As Re-set and other Czech environmental organisations associated with the “Stop Dirty Money” campaign point out, such a policy runs counter to the need to stop the worsening climate crisis.

Solving the climate crisis in line with the targets agreed to in the Paris climate agreement and keeping global warming below 1.5 degrees Celsius, would demand a phase out of coal by 2030 at the latest in OECD countries such as the Czech republic, it added.

UN Secretary General Antonio Guterres recently called on all actors from governments to finance institutions to get behind this target and phase out coal in line with Paris. By continuing to provide exemptions for dirty coal companies without a Paris-compatible phase-out plan, Generali is endangering this effort and helping to derail the European decarbonisation plans, campaigners argue.

“If Generali really wants to be seen as part of the solution to the climate crisis, it needs to start being serious about phasing out underwriting and investment in fossil fuels. In the Czech Republic and other European countries, staying within the remaining carbon budget to prevent a rise above 1.5 degrees means phasing out coal by 2030 – with no exceptions,” explains Josef Patočka, Researcher and Campaigner at Re-set.

However, climate campaigners also point out that phasing coal out is not enough and warn insurance companies against insuring oil and gas. On the contrary, according to calculations by the UN Environment programme, its consumption must also decrease if we are to be able to keep warming under control.

The campaigners added instead of actually closing coal-fired power plants, it said ČEZ has been selling them to other coal companies, as detailed in a recent report by Re-set.