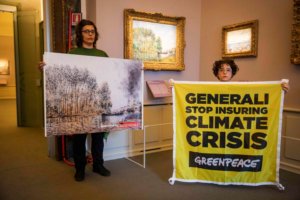 Environmental group Greenpeace has continued its campaign to force the insurance sector to end any involvement in the cover of fossil fuel operations.

Its activists were out across Europe yesterday to protest outside Generali’s offices as it said the industry was still not doing enough to aid the battle against climate change.

Greenpeace alleges the Italian insurer continues its support of coal in the face of a climate emergency. They demanded that the EU’s third largest insurer “rigorously applies its coal exclusion policy to the coal-heavy Czech Republic and Poland”. Protests occurred in Switzerland, Italy (above) , Austria, Slovakia, Czech Republic, Poland, Hungary, and France.

Peter Haberstich, climate and finance campaigner with Greenpeace Switzerland, said: “Insurance companies enable the fossil fuel industry that is stoking the climate crisis. It is unacceptable that Generali, a major global insurer, is still backing coal. While they insure lives, health and property, they support an industry that is seemingly destroying all three. Generali must apply its anti-coal policy without loopholes for climate polluters and in support of international efforts to phase out coal by 2030.”

In a statement Greenpeace added: “Presently, the insurance industry is still not moving fast enough on fossil fuels. Greenpeace demands that insurance companies no longer provide insurance for — or investment in — new fossil fuel projects, such as mines, wells, power plants, infrastructure etc., and gradually phase out existing business with fossil fuel companies in line with the Paris Agreement and the 1.5°C, moving first and fastest on coal.”

It added: “Generali, one of the largest insurance companies in the world, remains a coal insurer despite its coal exclusion policy published in November last year. Generali’s climate strategy refers to both the Paris Agreement and the IPCC report on 1.5°C global warming, yet Generali still insures coal projects like Kozienice, the third biggest coal plant in Europe. It also insures Turów Coal Mine, the planned expansion of which will risk polluting the drinking water of more than 30,000 people.”

Adam Pawloff, climate and energy campaigner with Greenpeace Central and Eastern Europe said: “There is no coal without insurance. Insurance companies have to take responsibility for their role in propping up the biggest energy-related cause of global climate change. If Generali wants to join the global climate fight, rather than be its target, it has to stop doing business with companies owning the most polluting coal plants in Europe: PGE in Poland and CEZ in Czech Republic.”

The European Investment Bank, the world’s largest public spender, has just decided to limit funding for new fossil fuel projects. AXA, Allianz, Zurich, Swiss Re, and others have either ended or limited their insurance support for coal. Generali too could play an important role in weakening coal’s dominance in the power sector, generating 40-41% of the world’s electricity, and contribution of 44% of global, energy-related CO2 emissions.