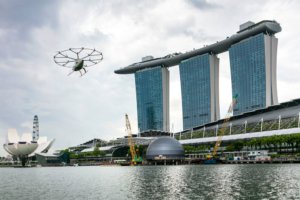 The final successful trial of a high-tech air taxi in Singapore has opened the discussion as to how the insurance market will meet the demand for cover.

Volocopter, the pioneer in Urban Air Mobility (UAM), successfully completed its first manned flight over Singapore’s Marina Bay this week. This was the last trial of a demanding test series to verify and validate the ability of Volocopter air taxis to fly over the area.

Government authorities including the Ministry of Transport (MOT), the Civil Aviation Authority of Singapore (CAAS), and the Economic Development Board (EDB) supported Volocopter during the testing phase.

A 2X model of the company’s test series flown by a pilot onboard was used. The flight covered a distance of approximately 1.5 km and lasted for two minutes at an average cruising height of 40 m. However the plan is to create a system where for the shorter journeys the helicopters will be autonomous and it is this that will test the insurance market.

There has been much debate around the use of autonomous vehicles both on the road and on the seas. many have said that for autonomous cars to work efficiently human driven cars need to vanish from the road. In the maritime sector there is a view that when autonomous vessels are introduced they will have specific sea lanes allocated.

However, Volocopter’s plans are to fly their electric powered aircraft across the skies of one of the world’s affluent cities and nations.

“The flight today in Singapore was the most advanced Volocopter flight yet and the piloted flight was as stable as ever. At the same time, we are showcasing a prototype of our full-scale VoloPort Infrastructure, allowing for a realistic demonstration of air taxi boarding and maintenance services. Never before have people been this close to experiencing what Urban Air Mobility in the city of tomorrow will feel like,” said Florian Reuter, CEO of Volocopter.

He added leading up to the flight, the aircraft had undergone intensive testing in Germany for several months. Following which, a rigorous flight test program to verify the Volocopter 2X aircraft performance under local environment was conducted at Seletar Airport in accordance with CAAS.

“Since late 2018, the Civil Aviation Authority of Singapore (CAAS) has been working with Volocopter to facilitate this flight in Singapore. The Volocopter team went through a series of stringent evaluations to ensure that all the necessary safety requirements were met before the flight was allowed to take place. By working closely with companies such as Volocopter, we hope to facilitate innovations for beneficial uses whilst ensuring aviation and public safety,” said Mr. Ho Yuen Sang, Director (Aviation Industry) from CAAS.

“Volocopter’s decision to testbed its innovative air taxi in Singapore is testament to the opportunities and environment that Singapore provides. The Singapore Economic Development Board hopes to be an enabling partner for companies developing new mobility technologies such as autonomous vehicles and urban aerial mobility. We are happy to support Volocopter in their development plans and hope that this is a first step towards the creation of more exciting business and job opportunities in Singapore,” said Mr. Tan Kong Hwee, Assistant Managing Director, EDB.

Neil Smith Secretary General of the International Union of Aeronautical Insurers told Emerg-in.co.uk: “ At present there is not a great deal that we can say about this. Currently there’s no regulatory framework in place for passenger flights for autonomous aircraft, even if passengers were willing to fly in them.

“Although the technology might be developed sufficiently to enable these services technically, the same as for driverless cars, practically, we are some way off them coming into service.”

There is work ongoing within the insurance industry to look at the issue of autonomous vessels but the view is that road and marine will be the first transportation systems to come into service in a significant way.

“The industry is facing the challenge of new technology in every area of business and the way we do business,” one aviation underwriter told Emerg-in.co.uk. “Electric aircraft are already setting the market a new challenge but we have a rage of craft in the skies which are powered in different ways. The level of technology in modern aircraft is such that they can effectively fly themselves but the pilots have to be in the cockpit in case things go wrong. That is particularly the case if they are passengers in board. That said when autonomous control of passenger aircraft of any size is proven technology it will, like autonomous vehicles open up new opportunities for underwriters.” 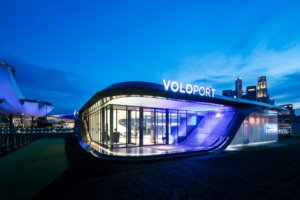