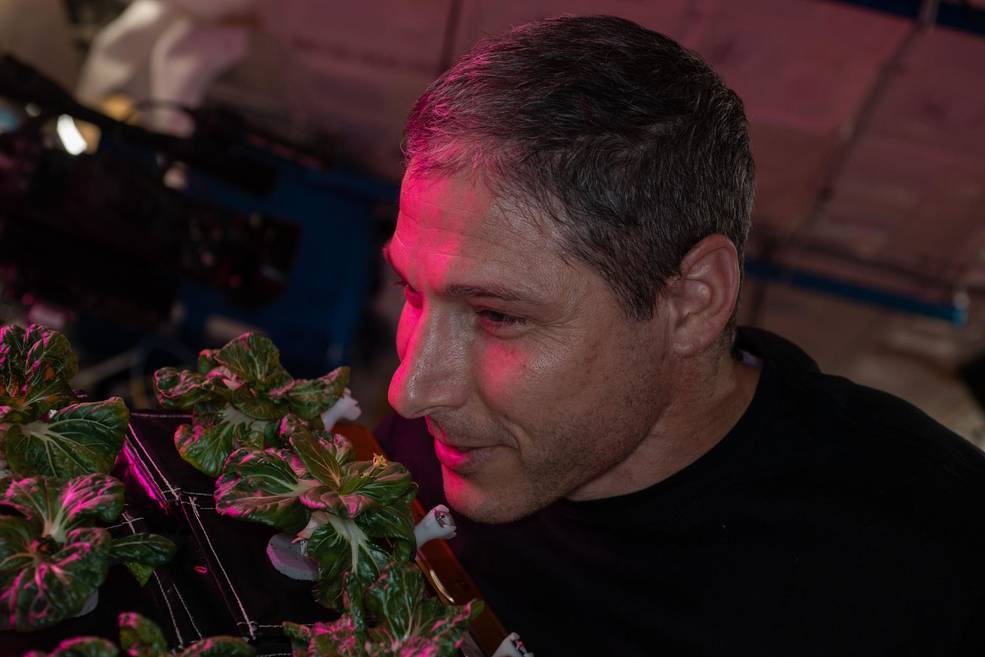 Astronauts on the International Space Station have hailed a major step in the move towards manned missions to Mars with the successful growth of a range of vegetables.

The crew have enjoyed a fresh supply of leafy greens, thanks in large part to the efforts of Expedition 64 crew member Michael Hopkins (pictured above). The success of not only their growth but also the ability to pollinate the crop has indicated that crews heading for Mars will be able to augment rations with the growth of a supply of fresh vegetables in a zero gravity environment.

The pak choi grew for so long that it began to flower as part of its reproduction cycle. Hopkins’ efforts in eclipsing the mark included using a small paintbrush to pollinate plant flowers. He decided on that approach after speaking with Kennedy’s Matt Romeyn, a space crop production project scientist and science lead on the four plant experiments.

“I wasn’t all at surprised that he chose this route to make sure the plants were fully pollinated because he has always wanted to be very involved,” Romeyn said. “After he used the paintbrush, we saw a high seed production rate.”

This experimentation is important because fruit crops require pollination, and crews need to understand how the process works in microgravity and, eventually, in reduced gravity. Fruit will head to the station soon when Kennedy sends pepper seeds to the space station later this year as part of the Plant Habitat-04 experiment. The pepper seeds will fly on SpaceX’s 22nd Commercial Resupply Services mission and will grow in the Advanced Plant Habitat. A VEG-05 experiment with dwarf tomatoes also is planned for Veggie next year.

“That’s mission accomplished for us right there … doing sustained crop production on station is an important demonstration for later missions beyond low-Earth orbit,” Romeyn said. “The crew is enjoying growing them, they’re enjoying eating them, and these are the exact kind of crops we can send on a long-duration lunar stay to provide supplemental nutrition. Everything we learn on station and the Moon will eventually enable doing this enroute to Mars someday.”

Growing these crops has been challenging at times. During VEG-03I, two plant pillows containing ‘Outredgeous’ Red Romaine and ‘Dragoon’ lettuce seeds were growing far slower than the other plants and would not have caught up by harvest time. With guidance from Veggie program scientists at Kennedy, Hopkins transplanted extra sprouts from the thriving plant pillows into two of the struggling pillows.

“The scientists were pleasantly surprised to learn microgravity appeared to benefit the plants, paving the way for potential future development,” added NASA.