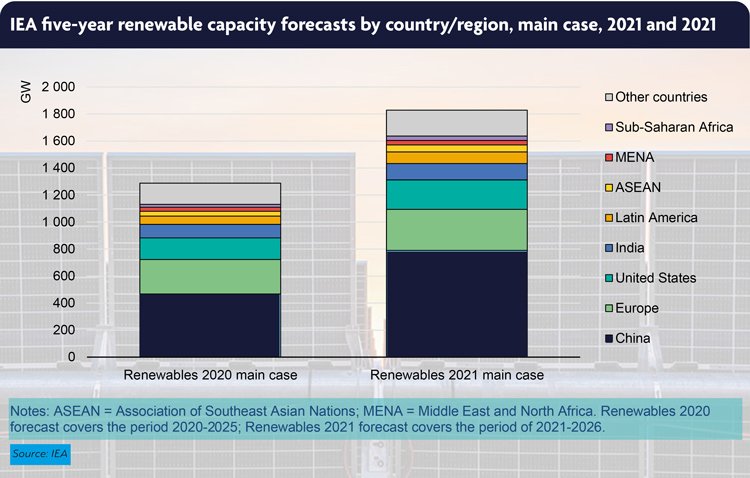 Stronger policies and raised climate goals are driving renewables to new records, but faster deployment across all key sectors is needed to reach net zero, according to the International Energy Agency (IEA).

The growth of the world’s capacity to generate electricity from solar panels, wind turbines and other renewable technologies is on course to accelerate over the coming years, with 2021 expected to set a fresh all-time record for new installations, the IEA says.

Despite rising costs for key materials used to make solar panels and wind turbines, additions of new renewable power capacity this year are forecast to rise to 290 gigawatts (GW) in 2021, surpassing the previous all-time high set last year, according to the latest edition of the IEA’s annual Renewables Market Report.

By 2026, it adds, global renewable electricity capacity is forecast to rise more than 60% from 2020 levels to over 4 800 GW – equivalent to the current total global power capacity of fossil fuels and nuclear combined.

Renewables are set to account for almost 95% of the increase in global power capacity through 2026, with solar PV alone providing more than half. The amount of renewable capacity added over the period of 2021 to 2026 is expected to be 50% higher than from 2015 to 2020. This is driven by stronger support from government policies and more ambitious clean energy goals announced before and during the COP26 Climate Change Conference.

The growth of renewables is forecast to increase in all regions compared with the 2015-2020 period. China remains the global leader in the volume of capacity additions: it is expected to reach 1200 GW of total wind and solar capacity in 2026 – four years earlier than its current target of 2030. India is set to come top in terms of the rate of growth, doubling new installations compared with 2015-2020. Deployments in Europe and the United States are also on track to speed up significantly from the previous five years. These four markets together account for 80% of renewable capacity expansion worldwide.

“The growth of renewables in India is outstanding, supporting the government’s newly announced goal of reaching 500 GW of renewable power capacity by 2030 and highlighting India’s broader potential to accelerate its clean energy transition,” says Dr Birol. “China continues to demonstrate its clean energy strengths, with the expansion of renewables suggesting the country could well achieve a peak in its CO2 emissions well before 2030.”

Solar PV remains the powerhouse of growth in renewable electricity, with its capacity additions forecast to increase by 17% in 2021 to a new record of almost 160 GW. In the same time frame, onshore wind additions are set to be almost one-quarter higher on average than during the 2015-20 period. Total offshore wind capacity is forecast to more than triple by 2026.

The IEA report expects this record growth for renewables to take place despite today’s high commodity and transport prices. However, should commodity prices remain high through the end of next year, the cost of wind investments would go back up to levels last seen in 2015 and three years of cost reductions for solar PV would be erased.

Despite rising prices limiting growth, global biofuel demand in 2021 is forecast to surpass 2019 levels, rebounding from last year’s huge decline caused by the pandemic. Demand for biofuels is set to grow strongly to 2026, with Asia accounting for almost 30% of new production. India is expected to rise to become the third largest market for ethanol worldwide, behind the United States and Brazil.

The report notes that governments can further accelerate the growth of renewables by addressing key barriers, such as permitting and grid integration challenges, social acceptance issues, inconsistent policy approaches, and insufficient remuneration. High financing costs in the developing world are also a major obstacle. In the report’s accelerated case, which assumes some of these hurdles are overcome, average annual renewable capacity additions are one-quarter higher in the period to 2026 than is forecast in the main case.

However, the IEA adds, even this faster deployment would still fall well short of what would be needed in a global pathway to net zero emissions by mid-century. That would require renewable power capacity additions over the period 2021-26 to average almost double the rate of the report’s main case. It would also mean growth in biofuels demand averaging four times higher than in the main case, and renewable heat demand almost three times higher. 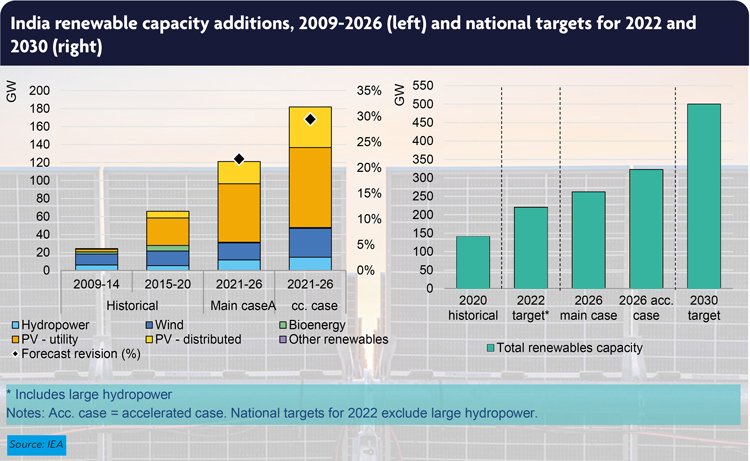 Renewables are set to account for almost 95% of the increase in global power capacity through 2026, with solar PV alone providing more than half. The amount of renewable capacity added over the period of 2021 to 2026 is expected to be 50% higher than from 2015 to 2020. This is driven by stronger support from government policies and more ambitious clean energy goals announced before and during the COP26 Climate Change Conference. 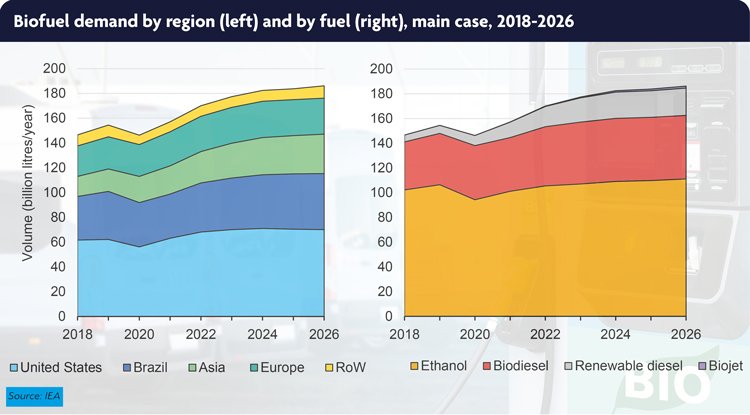