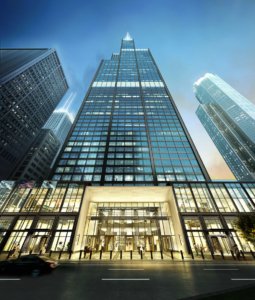 Four buildings, that have become instantly recognisable homes of the international re/insurance industry have been honoured as being voted some of the top 50 Iconic buildings in the past 50 years.

The Council on Tall Buildings and Urban Habitat (CTBUH) celebrated its 50thanniversary this year by announcing the top 50 at its annual congress in Chicago this week.

It said: “Throughout its history, CTBUH has highlighted best practice examples of tall buildings that represented a significant change in thinking or technique, by means of Journal case studies, conference proceedings, and since 2002, the annual Awards program.”

The four that made the top 50 were 30 St Mary Axe, The Lloyd’s building, the Leadenhall building all in the City of London and the Willis Tower in Chicago.

On 30 St Mary Axe, which was formerly the Swiss Re building. but is known across the City as The Gherkin the CTBUH said: “In helping to define a modern, open, and progressive image for one of the world’s oldest financial centres, 30 St Mary Axe set a benchmark in architectural quality for a new generation of tall buildings. Initially derided by critics for its unusual shape, it nevertheless became popular. As well as appearing on a stamp, the tower has been used extensively in the promotion of London through advertising, including on Olympic bid posters. The nickname ‘Gherkin’ has now been trademarked by the owners.”

On the Leadenhall Building (bottom left) the Council added: “The design strategy of the Leadenhall Building centres around its lobby’s elevation above the ground plane, creating a generous public plaza, and its offset steel “megaframe” core, affording column-free floor plates of varying depths. It is the world’s tallest building to have used this strategy. With its distinctive wedge-shaped profile, which allows key view corridors to be maintained, it has been affectionately nicknamed the ‘Cheesegrater’.”

The iconic home of the Lloyd’s market (below right) was described as “one of the most-recognisable exemplars of the British High-Tech movement.”

“The Lloyd’s Building is distinguished by its ‘inside-out’” transposition of internal services – staircases, lifts, ductwork, electrical power conduits and water pipes—to the exterior, leaving an uncluttered space inside. Modular in plan, each floor can be altered by addition or removal of partitions and walls.

The final insurance-linked edifice to make the list was the Willis Tower (above) formerly known as the Sears Tower.

“Sears Tower was the tallest building in the world for 24 years and set the standard for supertall skyscrapers worldwide,” said the Council.” The designers developed both large office floors for Sears’ operation, but also a variety of smaller floors, which would be more suitable for tenants requiring less floor area. The result was a first-of-its-kind bundled-tube structure. It has proven to be a remarkably influential design type and has been used in many supertall buildings built since, including the Burj Khalifa.” 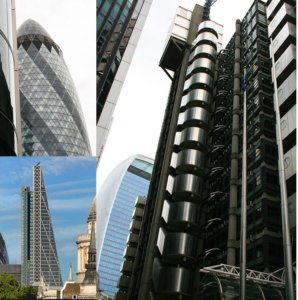