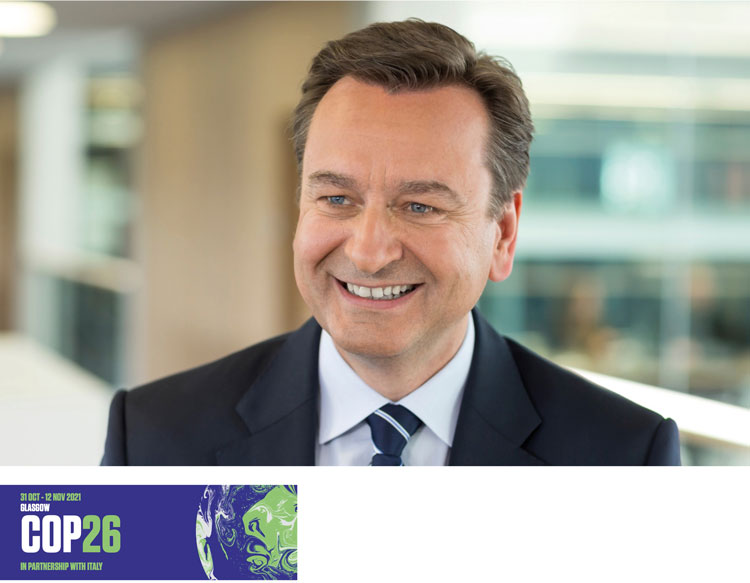 London insurance brokers have put themselves at the centre of the UK’s efforts to deliver the world’s first net zero financial centre as Munich Re warned the longer the world ignores climate change the harder it will be to reverse.

Responding to the announcement by UK Chancellor Rishi Sunak at the COP26 climate summit that the UK will become the ‘first ever net zero aligned financial centre’, Christopher Croft, CEO of broker body LIIBA said: “LIIBA members share the UK government’s sense of urgency in this matter. London market brokers are at the forefront of the drive to achieve net zero by 2050, both in terms of their clients and their own organisations.”

Commenting on the Chancellor’s specific proposal that UK financial institutions and listed companies will have to publish clear, deliverable plans setting on how they will decarbonise and transition to net zero, Croft added: “The insurance industry and brokers, in particular, have a key role to play in helping businesses transition to net zero because of their unique position in the economy. Brokers understand balance sheet risk, are involved in huge infrastructure projects, international transportation networks and they’ve developed a detailed world-leading understanding of climate risk. Their role in achieving this change will be critical.”

In June, LIIBA published its policy paper Our Role in Net Zero, which made the case that London’s specialist brokers, working closely with insurers, possess a unique combination of skills and expertise that will enable businesses to make the changes necessary to achieve the net reduction in carbon emissions.

Croft’s announcement came as Munich Re’s Chair of the board or management issued a rallying cry to the world on climate change as he arrived in Glasgow for COP26.

“The fact that this year’s Nobel Prize for Physics went to climate researchers shows that the world should have listened to the experts sooner,” said Joachim Wenning. (above pic) “Now time is running short, but in many cases we’re still lacking the reliable framework needed to efficiently protect the climate. Together with market incentives, the proper conditions can drive the development of new technologies to transform the global economy into a climate-neutral economy. It’s a good thing that the role of businesses in climate protection is being discussed here in Glasgow. One of Munich Re’s main priorities – both as an insurer and as an investor – is to help new technologies for a low-carbon economy achieve true breakthroughs.”

He added in order to better respond to natural catastrophes, structured risk management is called for at the national level – with clearly defined responsibilities to ensure prompt action in an emergency. In the private sector, it has proven sensible to appoint a chief risk officer (CRO), who has an overview of the greatest risks to the company. CROs are responsible for preventing risks and deploying necessary measures in an emergency.

At the state level, individual departments often focus only on the risks within their purview. Integrated assessments, let alone comprehensive responsibility, are often lacking. As a result, disaster prevention is often hindered by poorly defined responsibilities in these countries.

“Having a governmental CRO of sorts would mean having someone who knows all the main risks to society – and who is responsible for the requisite preventive measures and disaster recovery alike,” Wenning added.

However, time is running out.

“The longer we as a global community fail to properly combat climate change, the worse the risks posed by natural catastrophes and consequent losses will be,” said Ernst Rauch, Chief Climate and Geo Scientist at Munich Re.

He added scientists believe that climate change is at least partially responsible for the sheer scale of the latest catastrophic flooding in Central Europe, following on the heels of extreme rainfall in July 2021. At estimated overall losses of €46 billion, it was the costliest natural catastrophe in modern European history. Of those losses, over €9 billion were insured.

“Societies need to adapt to the consequences of climate change,” said the reinsurer. “Only then can a further rise in losses be mitigated and lives protected.

“From economic and humanitarian standpoints alike, a larger percentage of natural-catastrophe risks should be borne by insurers, i.e. spread across more shoulders. The insurance gap in industrialised countries has shrunk over the past 40 years. Today, half of all losses are insured, compared to a quarter of them in the 1980s. It’s a different story in developing and emerging countries, many of which are especially hard hit by climate change; as has been the case for decades, more than 90% of all natural catastrophe-related losses in such countries remain uninsured.

“In many of these places, national or supranational public-private partnerships could help – with insurance solutions being jointly developed by the private insurance sector and governments, plus the support of donor countries or the IMF. Munich Re bolsters such PPPs by engaging in numerous international initiatives, including the Sustainable Markets Initiative (SMI) and the Insurance Development Forum (IDF).”

Munich Re added increased international financing is an essential building block that means more people in many countries can afford the insurance that will ensure their livelihood if disaster strikes. As part of the COP process, several years ago the world’s industrialised countries pledged to provide $100 billion a year for mitigation and adaptation measures. Part of this money was to be earmarked for risk-transfer solutions. However, the overall sum has not been reached, and partnerships with their governments, which are essential to finding needs-oriented insurance solutions for low-income countries, have not yet been sufficiently developed.

“But experience shows that risk prevention, in the form of risk-transfer solutions, can also work in countries with low mean incomes,” said Munich Re. “In this regard, parametric covers may be good candidates – in other words, cover based on previously defined, objectively measurable indices. The insurer pays a contractually agreed amount when a defined trigger occurs, e.g. for storms, if a certain wind speed or volume of rainfall is exceeded. In this way, claimants can quickly receive assistance, benefiting from rapid claims processing and payment precisely when they most urgently need liquidity.”